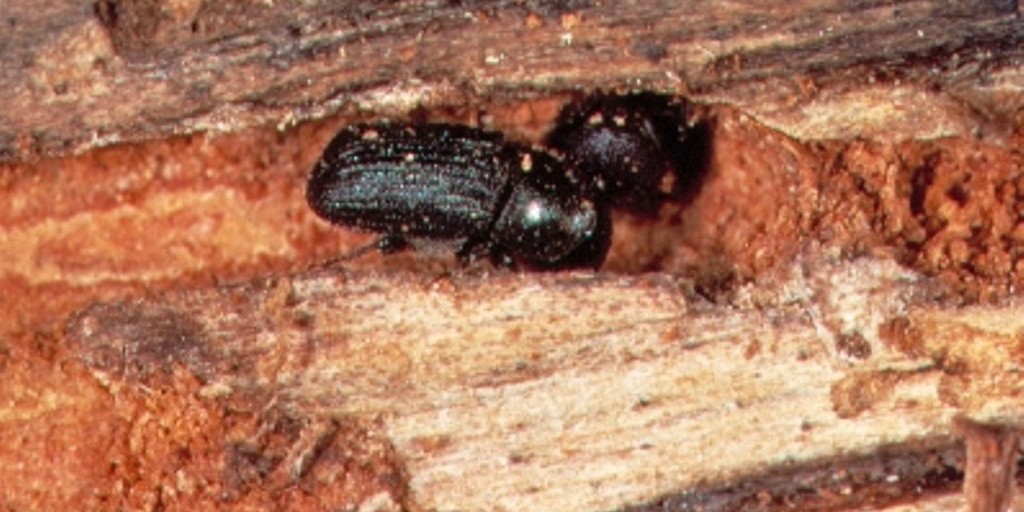 A mountain pine beetle burrows into a tree in Jasper National Park. The beetles have infested more than 10,000 pine trees in the area.

Chances are if you used your free national park pass this summer to visit Jasper, you noticed a dominant colour creeping into the typically green forest scene: red. And when it comes to the pine trees that dominate those forests, red equals dead.

“Take a look at these forests, because in five years, they’re not going to look like that,” said Janice Cooke, associate professor at the University of Alberta and director of the NSERC TRIA Mountain Pine Beetle Strategic Network. “Many of the pines that you can see from the Highway 16 corridor through the park will have been killed by the beetle.”

Cooke explained that a small cluster of infected trees at the west gate only a few years ago has now turned into more 10,000 infected trees today, with the number set to spike even higher as the outbreak of the destructive mountain pine beetle continues to spread. Infected trees are now being detected beyond the eastern border of the park, encroaching on the town of Hinton.

“Our parks are precious to us as Canadians, and our parks are under threat,” said Cooke. “The outbreak in Jasper is increasing rapidly, and Banff is under pressure too. This mountain pine beetle outbreak has every potential to radically change the landscape of the forests in the mountain parks in the same way that we saw in British Columbia a decade ago, and the rehabilitation efforts are almost unfathomable.”

Mountain pine beetles are thriving in places where the habitat used to be considered too inhospitable, such as Jasper. Any set of circumstances that allow for more beetles to attack trees, compromise tree defences or increase beetle survival can exacerbate the outbreak. For example, unseasonably warm winters over the past couple of years have allowed more larvae to survive to adulthood. TRIA-Net researchers have learned more about why drier conditions during the spring and summer leave the trees more vulnerable and less able to defend themselves from the attack of the beetles.

Not only are the threats immediate and obvious with direct implications on Alberta’s forestry and recreational industries, but the longer-term impact also includes serious threats to Alberta’s water sources, many of which feed through tributaries that travel through Jasper’s eastern slope, including the North Saskatchewan and Bow rivers. Another threat is the danger that these dead trees are like thousands of matchsticks, posing a serious forest fire risk.

“Pine needles accumulate a lot of flammable substances when they’re dying, and the bark is filled with flammable pitch. If a fire were to rip through Jasper right now, it would burn like an inferno,” warned Cooke. “Mountain pine beetles consumed 18 million hectares in B.C. That’s like half the size of Sweden. We have more than one million hectares that have already been affected in Alberta. The time to act was yesterday.”

Cooke and her colleagues through the TRIA Network continue to fight for the forests. Though it’s too late to save the already dead trees, the time is now to act to stop further spread at the eastern gates, she said.

“When you leave a mountain pine beetle outbreak unchecked, you built up a lot of population. If there are that many red trees, there are already a ton of beetles. The time for control is when the populations are on the increase. There comes a point in the progression of an outbreak that the money and effort to control it are too much. At that point, you have to walk away, because it becomes an unwinnable battle.

“But all is not lost. We know that control can be effective when the populations are still on the upswing, which is the case in the more eastern portions of the park. Researchers have learned a lot about the conditions at which control is efficacious, and that knowledge can be freely shared.”