Thinking Mountains conference this week will include two fundraising events as scholars unite to share research. 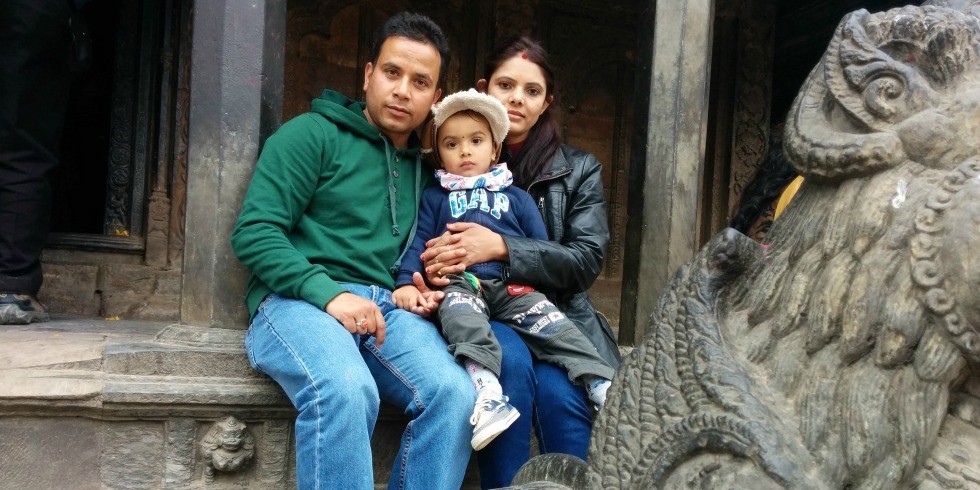 Baiku Acharya with his family at a historic monument in Patan Durbar Square in Kathmandu Valley in February 2015. The site was destroyed by the earthquake that struck Nepal April 25.

(Edmonton) The first call Baiku Acharya received was from his nephew in the United States, who said all of Nepal had been destroyed by an earthquake. The news was terrifying beyond anything the PhD candidate from Nepal could have imagined.

“I was frantic,” said Acharya, who left his wife and 32-month-old son in the Kathmandu Valley to study rural tourism at the University of Alberta. “I started calling back home, but no one answered. I was trembling, and didn't know what to do next.”

As the news started to break in North America, Acharya realized the devastation wasn’t quite as severe as his nephew had thought, but it was bad enough, and he still hadn’t heard from his family.

It was almost 21 hours before Acharya finally reached another nephew in his home town of Bhaktapur. The nephew was badly shaken but reported that none of Acharya’s immediate family had been hurt. His house, however, along with 90 per cent of the town, had been reduced to rubble.

Fortunately for Acharya, he just learned that his application for permanent residency status has been approved, which means he can fly his wife and child to Canada within weeks.

All of this has been a heartbreaking distraction while he tries to finish his thesis. With three degrees and eight years working for Nepal’s tourism board behind him, he chose the U of A to work on a doctorate because his supervisor, Elizabeth Halpenny in the Faculty of Physical Education and Recreation, is widely known as an expert in how tourism can help small communities.

As Acharya prepared a poster presentation for this this week’s U of A-hosted Thinking Mountains conference in Jasper, he admits it was hard to concentrate. The two case studies featured in this research are small Nepalese villages, both now erased from the landscape. It will likely be years before much of Nepal can turn its attention to tourism again.

Nonetheless, Acharya expects he will spend time at the conference talking about his home country and its struggle to recover. He will also help to raise funds to send back home.

The conference, which stems from the U of A’s Canadian Mountain Studies Initiative, aims to “promote dialogue about how mountains are understood physically—as ecosystems, in human history, and as part of world cultures,” says organizer Zac Robinson, who adds that the conference will also host two fundraising events for Nepal.

"My guess is everyone will be talking about [the earthquake and its fallout]. It's such a massive tragedy, and everyone has links to that place. The mountain studies community is pretty small."

In fact, the plenary speaker was to be Buddha Basnyat, a Kathmandu doctor who specializes in infectious diseases and high-altitude medicine, and is director of the Oxford University Clinical Research Unit in Nepal. Until late last week, Basnyat was determined to attend the conference, says Robinson, but has simply been overwhelmed by the scale of the disaster.

The U of A’s Mountain Studies Initiative is quickly gathering momentum since its inception three years ago. A cross-campus collaboration involving some 30 researchers in six faculties, it explores everything from glaciology and ecology to mountain culture and expedition literature.

It now also offers an interdisciplinary course introducing students to the mountains.

In the fall of next year it will offer a Mountains 101 MOOC (massive online open course) to anyone around the world interested in learning about the cultural, biological and physical perspectives on a type of landscape that takes up one-fifth of the world’s land mass and provides direct life support for 10 per cent of its population. The launch of the MOOC will be followed in winter 2017 by a certificate program in mountain studies.

"Mountain studies as an emerging discipline is inherently interdisciplinary, and I think anybody who knows and loves the mountains sort of knows that,” says Robinson. “When you travel in the mountains you want to learn a bit about the animals, the trees, the plants, the weather and the history.”

As for Acharya, he expects his future now lies in Canada as he awaits the arrival of his family.

“I’m here now,” he says. “I can’t stand what is happening to my family, but I think I will stay here, depending on what happens with my career. There are so many things I don't like about my country—the politics, the bureaucracy—even though I do still love Nepal.”