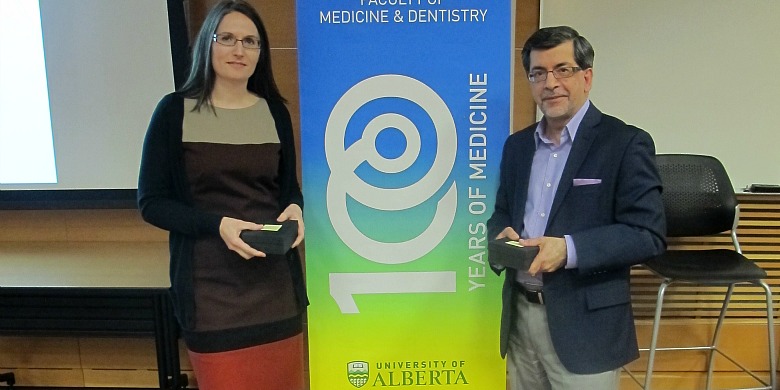 130412-hebert-jhamandas-banner
Jacqueline Hebert and Jack Jhamandas shared their promising discoveries with colleagues and the public as part of the Faculty of Medicine & Dentistry's centennial lecture series.

(Edmonton) Covering the latest in neuroscience research from the brain to the fingertips, two University of Alberta medical researchers highlighted their work that is helping to close the gap between new discoveries and patient care.

Jack Jhamandas and Jacqueline Hebert spoke to a group of 120 colleagues and members of the public April 8 at the Katz Group Centre for Pharmacy & Health Research. The presentations were part of a centennial lecture series the U of A’s Faculty of Medicine & Dentistry is hosting as part of its 100th anniversary, showcasing faculty members whose translational research is helping to move scientific discoveries “from bench to bedside.”

Jhamandas, a neurologist and neuroscientist in the Department of Medicine and the Centre for Neuroscience, gave an overview of his research on Alzheimer’s disease, which affects one in nine Canadians by the age of 65. That number increases to one in three by age 85.

Jhamandas and his team discovered that a drug intended for diabetes appears to restore memory in brain cells affected by Alzheimer’s. In the lab, the team tested brain tissue from animal models with Alzheimer’s disease, looking at the cells’ memory capacity. To test memory, they shocked the brain cells with electrical impulses and then measured the cells’ abilities to “remember” the experience.

Researchers have known for a long time that people with diabetes are at higher risk for Alzheimer’s, and vice versa. A protein called amyloid which diminishes memory is present in abnormally large amounts in the memory and cognition parts of the brains of Alzheimer’s patients. A sister protein, known as amylin, which comes from the pancreas of patients with diabetes, has the same impact on memory cells.

Jhamandas and his team used AC253, a diabetes drug that never made it to market, to try to block the toxic effects of amyloid protein on brain cells. When the drug was given to brain cells with Alzheimer’s, their memory trace was restored to levels similar to those in normal cells. In the lab models, the treatment led to significant improvement in tasks requiring memory function.

“Serendipity plays a big role in science,” said Jhamandas. “It was certainly a big part of some of this work.”

Hebert, a member of the Division of Physical Medicine and Rehabilitation, leads the amputee program at the Glenrose Hospital. Her research team studies advanced motor control and sensory feedback systems for upper-limb prosthetic devices, a group of projects known as Bionic Limbs for Improved Natural Control.

Advances in upper-limb prosthetics have lagged behind lower-limb technology partly because of the intricacy of the hand and its delicacy, sensation and control. The challenges Hebert and her team are trying to solve include learning to control the movements of these complex devices, bringing sensation of the hand back to patients and designing better ways to attach the prosthetic limb.

Edmonton is the only centre in Canada providing targeted reinnervation surgeries—procedures that rewire amputated nerve ends into some of the remaining muscle. “You still have the connection from your brain down the nerve that used to power your arm; the arm is gone but the nerves are still there,” said Hebert. “The goal is to restore a natural-feeling, thought-controlled muscle contraction that then drives the prosthesis to do what it should.”

During surgery, Hebert’s team splits the muscles and rewires the nerves to link four or five muscle sites to the prosthetic control. The patient is then able to think about straightening and bending the arm, or opening and closing the hand, and the prosthetic movement comes naturally. The patient can also perform these movements at the same time rather than one after another. “This in itself is a major advancement in prosthetic control,” said Hebert.

Along with better motor control, patients also had restored hand sensation. “Where we had reattached the nerve that controls the hand, when you touched their skin in that area they actually felt like you were touching their hand,” said Hebert, explaining that a major challenge in prosthetic replacement is the patient’s inability to feel where the arm is in space and what the hand is touching. “This sensory feedback is so basic to us, but is absolutely nonexistent in the world of prosthetic use.”

Hebert says the goal for prosthetic limbs is something akin to Luke Skywalker’s bionic hand in the Star Wars movies—an artificial hand with normal function and sensation. “That’s the dream,” she said, “but it’s no longer an impossible dream.”