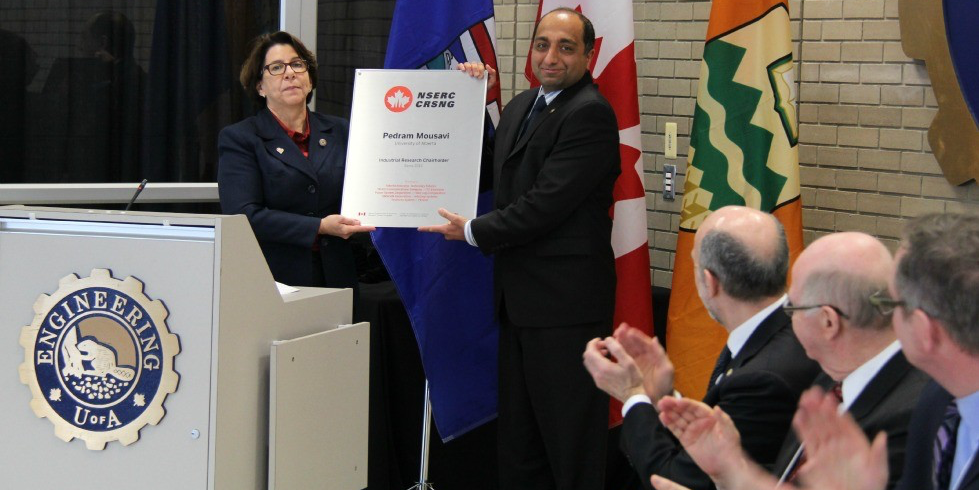 (Edmonton) How does leading-edge research work to improve industrial productivity and diversify the economy? A new industrial research chair program at the University of Alberta’s Faculty of Engineering is aiming to achieve both goals.

By helping the oil and gas industry operate more efficiently through the use of new intelligent wireless sensors and antennas, mechanical engineering professor Pedram Mousavi is also helping to expand the province’s information and communications technology industry.

Although the announcement of his appointment as the NSERC-AITF Associate Industrial Research Chair in Intelligent Integrated Sensors and Antennas was made Feb. 10, he and his research team have been working with industry partners for the past 18 months—and they’ve already accomplished a lot.

Mousavi’s team has licensed three new technologies to one of its industrial partners (Titan Logix) and is in the process of signing two more technologies to another (Pason Systems). An antennae coupling developed by the research team is being sold by yet another partner (Testforce) to clients around the world, and a spinoff company based on the team’s work is being created by his graduate students.

Mousavi says he was unsurprised that oil prices have dropped so dramatically this year—it is the natural cyclical character of resource markets. But he hopes his research program can diversify the economy enough to reduce the province’s reliance on the oil and gas sectors. At the same time, he wants to help the industry operate in more cost-effective and efficient ways.

Present-day technology only allows for a certain percentage of oil or gas to be brought to the surface. But Mousavi and his team, which also includes leading researchers in the Department of Electrical and Computer Engineering,  are developing intelligent wireless devices connecting multiple sensors that could make resource operations much more cost-effective.

Data gathered by these systems could improve productivity by informing off-site experts about an oil well’s operation and the quality of oil it is pumping from the ground. These analysts would be able to respond to the information and make real-time decisions about how the well should be operating.

Working in some of Canada’s top research facilities, the team is also developing an ultra-wideband radar system to monitor oil in transit on rail cars or in tankers hauled by trucks or being stored in tanks. It is also building antennas and front-end circuits for an emerging 5G network, working on ways to wirelessly power remote sensors, and developing a new type of 3-D printer capable of manufacturing electronic devices, sensors and antennas in one integrated process.

The research program has been funded for five years with a possibility of renewal. Funding for Mousavi’s research program totals $2.8 million, including $925,000 each from NSERC, Alberta Innovates – Technology Futures and industry partners (Telus, TRTech, Pason Systems Corp., Titan Logix Corp., ITS Electronics Inc., EMSCAN, InfoChip and TestForce). The remainder of the funding comes from the U of A.

Crucial in-kind support in time and expertise from industry partners is valued at about $900,000, and key equipment funded through the Canada Foundation for Innovation and Alberta Innovates – Technology Futures is valued at $1.5 million.

David Lynch, dean of the Faculty of Engineering, says collaborative partnerships such as the NSERC Industrial Research Chairs benefit everyone involved by bringing industry challenges to university classrooms and labs. This forms connections between education, research and application of new knowledge.

“When industry and universities work together, students gain a deeper understanding of the concepts they’re learning because they can see the connection between their studies and the practical applications of engineering principles,” Lynch said. “At the same time, industry and the engineering profession benefit as we educate a highly qualified new generation of engineers.”

“This demonstrates that these programs very quickly have significant outcomes for a receptive industrial community,” he said, adding that the relationship between university researchers and industry connects the “pull” of industry needs with the “push” of university research, so the two become aligned.

Pamela Moss, NSERC’s interim vice-president of partnership programs, said Mousavi has the right blend of private-sector and academic experience and success to make the partnership work, and that the technologies he is developing would help industry react more quickly to field conditions, avoiding costly shutdowns or errors.

“And these days, with the price of oil down, efficiency becomes even more important,” she said, adding that the fact that Mousavi has more than 20 graduate students as part of his team demonstrates the educational impact of the funding.