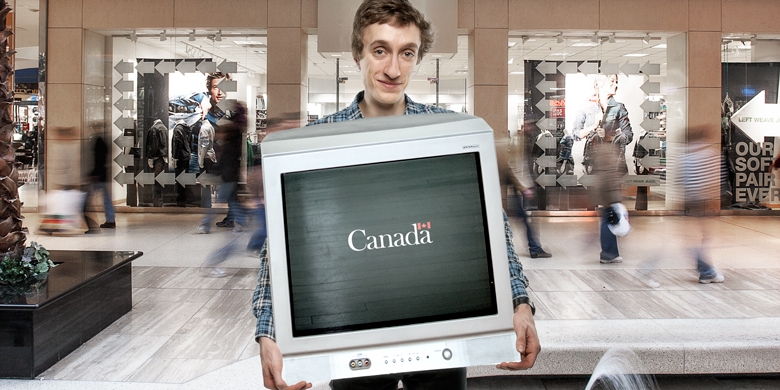 (Edmonton) When it comes to portraying Canada’s multicultural makeup, Kevin Pinkoski says those in charge of creating ads for the federal government may be working with a limited palette.

Pinkoski, a fourth-year arts student supervised by political science professor Linda Trimble, undertook a study of about 20 ads produced for various government departments. He noticed that visible minorities and Aboriginal people were virtually absent from the ads—and served only as background when they did appear.

He says the result is that ethnic groups likely won’t feel a strong connection to what they are seeing—and may even feel excluded from the ads’ depiction of Canadian identity.

“Waking up” to government advertising

Pinkoski had the idea for his study after he heard about a staged citizenship ceremony last year, in which government staffers posing as new Canadians were dressed up to resemble various minority groups. He wondered how else the government was using minorities to communicate messages to Canadians, so he began analyzing advertisements from the Canadian Forces, Health Canada and other departments.

In “Waking Up Canadian,” an ad promoting important changes to citizenship rules, items of Canadiana—from poutine to hockey sticks—are visible throughout the video. Yet a member of a visible minority is depicted only in the final moments of the commercial, said Pinkoski, and only as a secondary character. Pinkoski observed a similar pattern in the other videos he screened.

“In other advertisements, it was the same way. If there was an image of an Aboriginal (or minority) person that popped up, it would always be in the last shot, never a central character or someone who had a speaking role.”

Pinkoski notes that the minority characters that do appear are not portrayed in a negative light. But he says the lack of minority or Aboriginal central characters may prevent audiences from connecting with the characters or the messages contained in the videos. Further, he points out that for white Canadians, there is a mixed message about what and who is really “Canadian.”

“As a Caucasian Canadian, when I watch these advertisements, I don’t see as a main character someone who is a minority that I am forced to make that association with,” said Pinkoski. “I think that’s a big part of multicultural policy in Canada—having a minority in a position wherein someone in the majority has to identify with the minority. That creates a real equality.”

Pinkoski says there may not have been a clear policy about representing minorities in these videos. Though it may be the fault of the agencies that developed the ads, he says, it may also be the government’s fault for not looking at the bigger picture of how minority audiences may react to the videos. The lack of connection with the minority audience may evolve into an identity crisis of sorts, with new Canadians or immigrants questioning what constitutes the true identity of a Canadian. Rather than a basic “white” canvas, there needs to be more representation of the various cultures that make up the Canadian population. Otherwise, he says, it could mean less of an inclusive, open multicultural society.

“There is the risk of having this secluded multicultural society, where people of other cultures only exist together and don’t interact with those of different cultures. I think that presenting one image of what it is to be Canadian doesn’t prevent that,” said Pinkoski. “There’s value to each of the cultures, and that’s what you can associate with a true Canadian culture.”