Music grad ready for her next stage 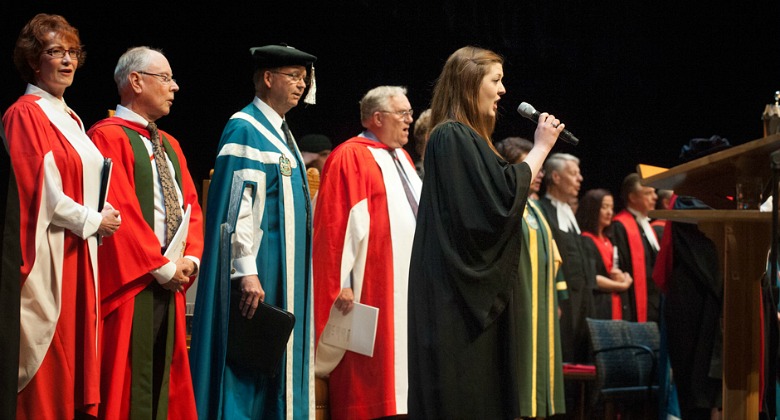 (Edmonton) Gianna Read knew at an early age that the stage was the place for her to shine. Since then, she has danced and sung her way around the world. But the University of Alberta music graduate’s most recent performance was closer to home—on the convocation stage, singing Canada’s national anthem to honour the class of 2013.

“My parents put me in ballet classes when I was very young, when I was five. I love to perform, that’s where my heart lies. I realized I wasn’t going to be happy doing anything else. So I continued to dance for 11 years, mostly ballet, but also some jazz,” Read says. “I felt more comfortable onstage than any other place.”

She has spent plenty of time onstage, appearing in productions including Footloose, High School Musical and Beauty and the Beast. But it was after singing in the Gilbert and Sullivan comic opera Patience that she decided it was time for classical voice training.

So she turned to the U of A, where received personal training, coaching and professional support to enhance her singing talent as she makes the shift from dancing to singing.

Studying with the U of A’s Department of Music, she says she’s been given a wide range of opportunities, from performing at the Winspear Centre to taking on challenging roles in productions outside Canada—including the role of Belinda in the Henry Purcell opera Dido and Aeneas, a production she recently finished with the Yorkshire Opera Workshop in England.

She says the program has prepared her even for the challenging task of singing the national anthem during eight days of convocation ceremonies.

“With everything that we do at the university, we also get exposed to the community. I have had several opportunities to perform at the Winspear Centre, both solo and in choirs, most recently singing the soprano solos in Mozart's Grand Mass in C minor. At other universities, you don’t get the opportunity to perform at places like the Winspear. So a lot of opportunities for professional development were opened up for me," she says.

“It was very humbling to be asked to sing the national anthem. I’m thrilled to be doing it and I’m prepared, because I’ve done several emotionally difficult opera roles in the past. I’ve been trained to work with my emotions as they come to make sure that they don’t hinder performances, they enhance them.”

Behind the curtain of Read’s success are U of A professors Elizabeth Turnbull and Len Ratzlaff, whom she credits with helping to prepare her for the future.

“Len is one of the most brilliant choral conductors in all of Canada, and Elizabeth has an amazing performance career. She’s an amazing mentor. Her reputation is good and that made me want to study with her,” Read says. “They really just want to get you ready for what you’re going to experience in the real world. And I feel like I’ve been extremely prepared for that.

“I hope to be performing somewhere, whether it’s Broadway, the Citadel or the Metropolitan Opera—I really don’t care, as long as I’m onstage.”

Music grad ready for her next stage