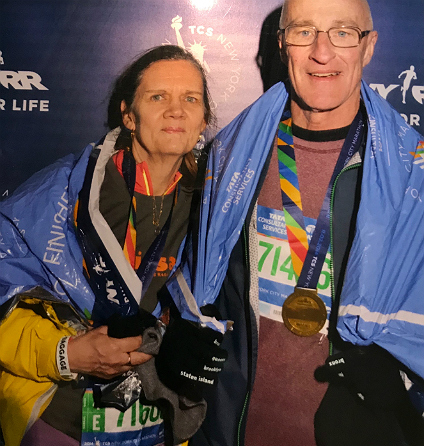 Laurel and Fred Sproule finished the New York Marathon together in 2014. “It’s hard at first to accept things the way they are," Laurel says, "but when you do, you can move on.” (Photo: Supplied)

Sudden role reversal can be hard on both partners, says U of A researcher who offers tips to help couples adapt to their new reality. 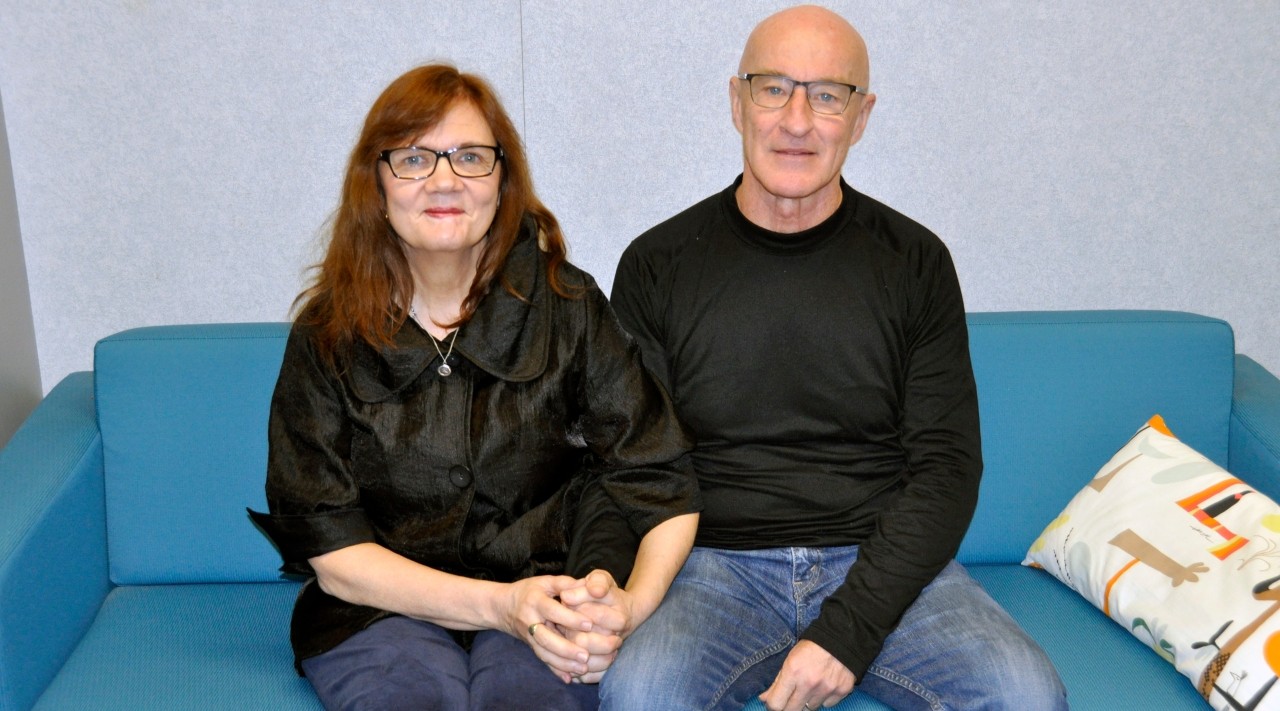 Laurel and Fred Sproule credit the strength of their marriage for helping them cope and adapt to their new life together after Fred suffered a heart attack and stroke five years ago. "It’s changed what we do, but it hasn’t changed our solid relationship," says Laurel. (Photo: Michael Brown)

Laurel Sproule knew something in her 18-year marriage was changing when she came into the kitchen and found her husband Fred just standing there.

He’d suffered a recent heart attack and then a stroke, but was home, and slowly responding to therapy. Getting ready to go out one day, they needed to eat lunch first, so Laurel laid out sandwich fixings and, going upstairs to change, asked her husband—who’d always loved cooking—to make himself one.

“I came back down and he’s still standing there. He didn’t know what to do.”

Laurel realized the dynamic of their marriage would have to shift. Fred, who’d always done most of the driving, the household shopping and the cooking, couldn’t do any of it. The stroke had left him with almost no peripheral vision and with aphasia, a communication disorder. He could write sentences, but couldn’t read or recognize the alphabet.

“I didn’t really understand all his deficits, but that’s when I started to come out of my shock and figure out what is going to be worth our while to focus on and what isn’t, in terms of what he could be expected to do,” Laurel says now, five years later.

It became a role reversal, which is one of the biggest challenges and keys to helping marriage survive a stroke, according to a recently published University of Alberta study.

While marriage vows include the solemn promise to stick together “in sickness and in health,” the reality can be very different, said lead author Sharon Anderson, who studied how stroke affects marriage to earn her PhD.

“The assumption most people make is, ‘I didn’t sign up for this,’” she said. “Life has changed, and you have to decide how you’re going to manage in that situation.”

In the course of interviewing 18 couples, including the Sproules, and reviewing other published research, Anderson identified three phases couples endure after stroke: feeling overwhelmed, resolving conflict and perceiving value in the marriage.

The first months after Fred’s stroke, for instance, were a mire of anxiety as Laurel scrambled to adjust to the couple’s situation.

“He was in this fog; he didn’t know what he couldn’t do,” she said. “All of a sudden I’m doing all the driving, all the cooking, the driving, the shopping. I resented it, but I thought it was going to get better.”

For his part, Fred remembers little about that time.

“There was no challenge for me in the first six months. I just did what I was told and I really wasn’t sure of what was going on, so those first months were really hard on her, but I wasn’t aware of it. Mostly, I just existed.”

“I can remember yelling, getting mad a few times. There’s a lot of frustration she has to live with, things dumped on her lap.”

Recognizing what each partner is going through is important to preserve the relationship as it evolves after a stroke, Anderson noted. Some mutual understanding is essential.

“The marriages that we found did survive, they could recognize that reciprocity. They appreciate what the other has done.”

“Some couples went through a definite role difference, whether it was parent to child, nurse to patient, that’s how they referred to themselves when they came home from the hospital. For marriages that broke down, they just couldn’t figure out that reciprocity. The stroke survivor would have a hard time working out that giving and receiving in a marriage.

“The survivor can’t do what they used to do and they need help. Their care partner doesn’t know how much help to provide and how much to offer. And how does somebody accept that care, and do they feel beholden? There’s lots of things to work out emotionally.”

Successful couples were able to talk about it without blaming or undermining their partners, Anderson noted.

“They recognized that life had changed and accepted that change in roles.

“Regardless of what happens, they still need each other and still want to be together, and the question then becomes, how do we cope together? It’s not, this is your problem or this is my problem, it’s the stroke that is the problem and we are working on this together.”

In many ways, it’s the same as dealing with other challenges facing marriage, she added.

“Think back to those times when it was difficult, when you hadn’t slept because of baby, or a parent had passed away or a job was lost. Think back to how you handled those stresses, how you got it together and how you are going to handle this—it’s just another challenge.”

Valuing the marriage was also key to getting through the tough times, Anderson found.

“Couples that were successful could look at what they still had rather than what they’d lost.”

Fred, through occupational therapy, time and practice, gained back some of his abilities. He can read now, though not as quickly as he could before. Some of his cooking skills also returned and when he and his wife shop, his improved memory lets him add one or two items to the cart. But his vision remains limited, which put an end to him driving.

Laurel realized she’d have to give up hope that her husband could go back to doing all he’d done before. But while she grieved that loss, she also realized something else.

“He was still the man I married. It’s changed what we do, but it hasn’t changed our solid relationship. The things that make Fred Fred are still there.”

About one-third of the couples she talked to reached similar conclusions about their loved one and “went back to being husband and wife,” Anderson noted. “It was a gradual shift for many of them.” Others settled more into roles of caregiver and receiver.

When the Sproules learned Fred’s vision wouldn’t fully return, they made a decision to get on with life anyway.

“I realized we had plans,” Laurel said. “It’s hard at first to accept things the way they are, but when you do, you can move on.”

In her case, she conquered her fear of busy American freeways to drive them all the way to Utah, where they hiked—one of Fred’s favourite hobbies—and they later did the New York Marathon.

“I knew we had to do it, because I knew this is who Fred was, and mostly still is.”

Marriages that were strong before stroke weathered the fallout better than those that were already struggling, said Anderson.

“If there was stress in a marriage beforehand or if couples were overwhelmed by too much work, not enough money, it got more and more difficult to relate to one another. If they hadn’t been so overwhelmed, they might have recognized what the other was doing and been able to walk a mile in their shoes.”

The Sproules credit the strength of their relationship before the stroke with helping them survive the challenges and changes that followed.

“I don’t do this out of obligation, I do it out of love that has existed from the moment we got together,” said Laurel. “I spent the first year after his stroke wishing Fred would come back to his full abilities, but now life is pretty good, regardless. We have a lot to be thankful for.”

In one American study of marriages and illness that she reviewed, Anderson found there was an elevated risk of divorce if a wife became seriously ill with stroke, cancer, or heart or lung disease. But overall, the number of divorces was low, especially for couples in long-term marriages, which were much more likely to end by widowhood (24 per cent) than divorce (six per cent).

“There is hope. It’s a tough situation, but people get through it. There’s still a relationship to enjoy,” said Anderson.

There are ways to cope as a married couple dealing with stroke, said Anderson, who offered these suggestions:

Ask for as much help as possible

Soon after the stroke occurs, the caregiver should start seeking resources that will help couples adjust to their new circumstances.

“There’s no one-stop shop,” but discharge from the hospital is a good time to ask occupational therapists about what’s available, Anderson said.

“Ask questions about available rehabilitation services, get enrolled in any research studies that you’re asked about, get home care help. Take advantage of the services you’re entitled to.”

That could include therapy through the Glenrose Rehabilitation Hospital or programming through the U of A’s Faculty of Rehabilitation Medicine, both of which the Sproules accessed, said Laurel. “You have to be focused and insist on the help you need,” she said.

“The way people recover from stroke is by doing things—you learn by doing,” Anderson said. For the caregiver, that means not doing everything for their partner.

“Let them do things for themselves—they’ll get better and better at it. It acknowledges that life is harder, but we also have some successes here. I, as the carer, get to go to the store for an hour and you manage on your own, and pretty soon, we can walk around the store together.”