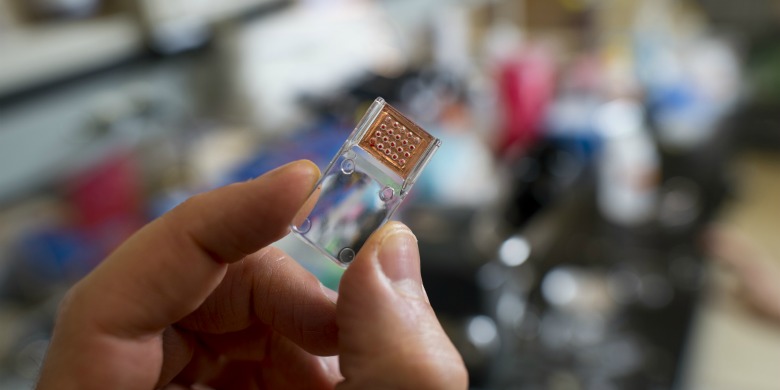 120424-dominochip-banner
The Domino technology uses a plastic chip that can perform 20 genetic tests from a single drop of blood.

(Edmonton) You wouldn’t know it from appearances, but a metal cube the size of a toaster, created at the University of Alberta, is capable of performing the same genetic tests as most fully equipped modern laboratories—and in a fraction of the time.

At its core is a small plastic chip developed with nanotechnology that holds the key to determining whether a patient is resistant to cancer drugs or has diseases like malaria. The chip can also pinpoint infectious diseases in a herd of cattle.

Talk about thinking outside the box.

Dubbed the Domino, the technology—developed by a U of A research team—has the potential to revolutionize point-of-care medicine. The innovation has also earned Aquila Diagnostic Systems, the Edmonton-based nano startup that licensed the technology, a finalist nod for this year's prestigious TEC NanoVenturePrize award.

“We’re basically replacing millions of dollars of equipment that would be in a conventional, consolidated lab with something that costs pennies to produce and is field portable so you can take it where needed. That’s where this technology shines,” said Jason Acker, an associate professor of laboratory medicine and pathology at the U of A and chief technology officer with Aquila.

The Domino employs polymerase chain reaction technology used to amplify and detect targeted sequences of DNA, but in a miniaturized form that fits on a plastic chip the size of two postage stamps. The chip contains 20 gel posts—each the size of a pinhead—capable of identifying sequences of DNA with a single drop of blood.

Each post performs its own genetic test, meaning you can not only find out whether you have malaria, but also determine the type of malaria and whether your DNA makes you resistant to certain antimalarial drugs. It takes less than an hour to process one chip, making it possible to screen large populations in a short time.

“That’s the real value proposition—being able to do multiple tests at the same time,” Acker said, adding that the Domino has been used in several recently published studies, showing similar accuracy to centralized labs.

The Domino was developed by a team led by Linda Pilarski, an experimental oncologist with the Faculty of Medicine & Dentistry and a former Tier 1 Canada Research Chair in biomedical nanotechnology.

In 2008, her team received $5 million over five years from Alberta Innovates Health Solutions to perfect and commercialize the technology. As an oncologist, Pilarski is interested in its pharmacogenomic testing capabilities, such as determining whether breast cancer patients are genetically disposed to resist certain drugs.

“With most cancers you want to treat the patient with the most effective therapeutic as possible,” she said. “That’s what this does: it really enables personalized medicine. It will be able to test every patient at the right time, right in their doctor’s office. That’s currently not feasible because it’s too expensive.”

Along with its versatility, two key selling points are affordability and portability, with each portable box expected to cost about $5,000 and each chip a few dollars, says Aquila president David Alton. It’s also designed to be easy to use and rugged—important features for the livestock industry, the company’s first target market. The Domino will be put through trials within a year at one of the country’s largest feedlots in southern Alberta.

“We see a huge potential market for the technology and we’re looking at applying the technology developed here at the U of A to markets first in Alberta and then globally, to address important health issues here and throughout the world.”

Watch a 3D animation of the Domino chip