Narrowing the search for life on Mars 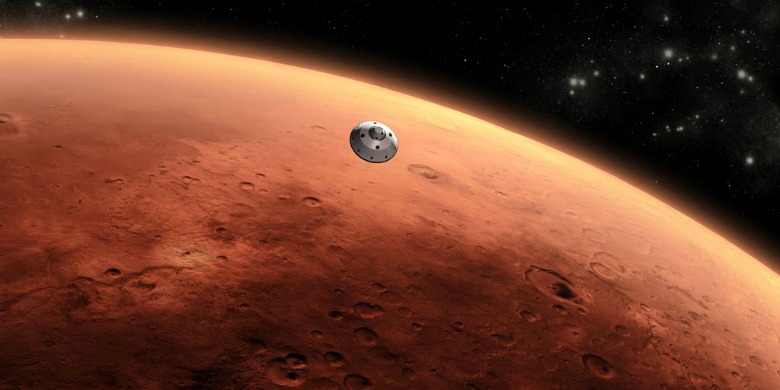 120524-mars-banner
The Curiosity rover will be tucked inside the spacecraft's aeroshell as it approaches the surface of Mars for an Aug. 5 landing. One of the mission's goals is to find clues about whether life existed on Mars. (Image: NASA)

(Edmonton) Is there life on Mars? A definitive answer to that age-old question might be a little closer thanks to a startling discovery about the Red Planet’s geology that was made with help from a University of Alberta researcher.

U of A geologist and meteorite expert Chris Herd was part of a team that identified a previously undiscovered source of carbon in several Martian meteorites.

A Martian meteorite is rock ejected from Mars by impact from an asteroid or comet. It arrives at Earth in a ball of fire. The meteorite’s origins are determined by an analysis of its chemical elements that researchers have identified as markers for Mars. All Martian meteorites formed as lavas that cooled at the surface.

“We identified carbon-bearing compounds that originated as part of hot magma from within Mars’ mantle layer,” said Herd. “The magma erupted at the surface of Mars the same way volcanic rock forms here on Earth.”

Herd says this is the first time organic-like carbonaceous material has been found emanating from beneath Mars’ surface. Herd adds the discovery opens up new possibilities for determining whether life ever existed on the planet.

“If Martian meteorites are representative of magmas throughout Mars’ history, then they are also representative of the mechanism by which raw materials for life were delivered from the interior of the planet to the surface,” said Herd.

Herd says the research team’s work could be useful information for NASA’s next mission to Mars. The Mars Science Laboratory mission with the rover vehicle, named Curiosity, is scheduled to land on Mars Aug. 5.

Herd says the carbon-bearing compounds he identified are only 200 million years old and do not necessarily have a connection to life on Mars at that time, but he adds things could change with Curiosity’s mission.

“Curiosity could find older carbon-bearing rock, which might be linked to life on Mars at an earlier time in the planet’s history,” he said.

Herd was a co-author on the research led by Andrew Steele of the Carnegie Institution of Washington. It was published May 24 in the journal Science Express.

Narrowing the search for life on Mars
Newsroom