As far as we know, there isn’t a game or training system like this in the world.

Students develop video game to help save lives in critical moments after birth. 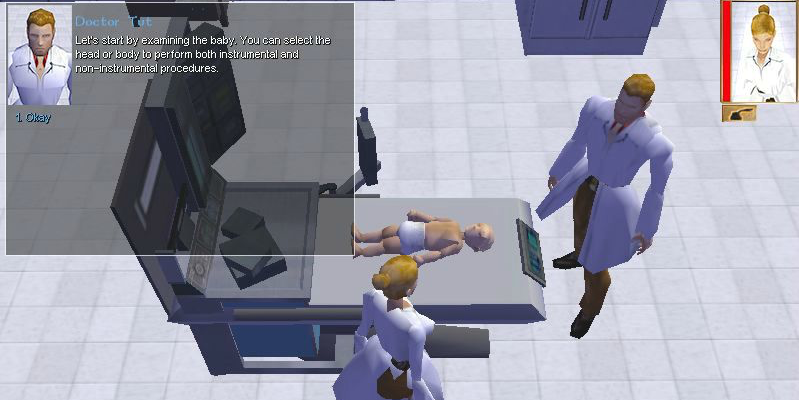 Six undergraduate students at the University of Alberta have developed a video game to enhance neonatal training and help save lives in the critical moments after birth.

“We were approached in the spring of 2014 by neonatal physicians in the U of A’s Faculty of Medicine & Dentistry who identified a need for better neonatal resuscitation training to help prevent infant deaths,” says computing science professor Vadim Bulitko. “Student teams from our fall and winter terms of the Computers and Games class submitted proposals for the chance to work on the game.”

RETAIN (REsuscitation TrAIning for Neonatal residents) is being designed to provide a customized experience that adapts to the skills of the learner, drawing on the U of A’s international leadership in artificial intelligence, machine learning and gaming.

The final team who worked on the game consisted of six undergraduate students from the departments of art and design, biological sciences, computing science and psychology. The students filled the roles of three programmers, one writer, one musician and one artist.

“As far as we know, there isn’t a game or training system like this in the world,” says Bulitko. “Neonatal resuscitation training has worldwide relevance, but training can’t be a ‘one size fits all’ approach.”

The project offered the undergraduate students an opportunity to collaborate with researchers from the Faculty of Medicine & Dentistry who also work in the Neonatal Intensive Care Program at Edmonton’s Royal Alexandra Hospital.

Worldwide, approximately one million newborn infants die annually due to asphyxia at birth. Additionally, one in 10 are born prematurely, and 10 per cent of those will require help breathing from trained personnel. Experts say keeping the training of those health professionals current is a consistent challenge.

“We know that for residents the skills fall off in a two- to three-month time period. Even the people who are doing resuscitation day in and day out need to keep practising,” says Kumar Kumaran, a clinical assistant professor in the Faculty of Medicine & Dentistry’s Division of Neonatal-Perinatal Care. “Arranging for practice involves the use of simulation, which requires people and planning and is also resource-intensive. So in that context, we began to ask ourselves, ‘Can we come up with something better for a newer generation interested in games and technology? Can we better bring out and retain their skills at the end of the day?’”

In the game, the character controlled by the player is directed to a delivery room to assist with a neonatal resuscitation. Once there, the player is given limited information and a series of visual prompts to alert them to the baby’s condition. Correct medical decisions must be made within a limited amount of time to ensure the infant’s survival.

Georg Schmolzer, an assistant professor of neonatal resuscitation in the Faculty of Medicine & Dentistry, adds, “The game scenario in RETAIN provides an element of drama and stress, because if you do the wrong thing, then something happens to the baby. The idea is about getting the steps right. Most of the time when there’s a problem, people aren’t taking the right steps because stress freezes them. That’s an area we’d like to see improvement in and test through the game—whether people who play it can learn to handle stress better."

Until now, Bulitko has focused his students’ projects in the Computers and Games course only on entertaining games with topics selected by the students. This was the first introduction of a serious game based on a request from the community.

“Video gamers are not just in their basements shooting things up; games can have a wide-reaching social impact,” says Bulitko. “For instance, the so-called serious games can be used for education and training.” Working in a community service-focused model of learning gives students an opportunity to work on interesting projects with local relevance, and helps them develop a network for after graduation, he adds.

Computing science is accessible to and connected with many other disciplines. Computers and Games is a highly coveted interdisciplinary class with more than 100 students from across campus competing for 36 spots in each of the fall and winter terms.

Jessica Hong, an art and design student and the producer on team that built the pilot version of RETAIN in Bulitko’s Computers and Games class glows when talking about the experience. “CMPUT 250 was unlike any other classes I had taken at the U of A,” she says. “It gave me the chance to work with a team of students from different disciplines to create a working prototype of a computer game while getting hands-on experience in games development. When I signed up, I had no idea I would be involved with a project like RETAIN, where we actually got the chance to affect real change in the community.”

“This Computers and Games course helped me to put my university studies in perspective,” Hong says. “I’m motivated to become more involved in serious games. Collaborating with the doctors and the other students on RETAIN will be invaluable to me in future projects. Submitting our game for evaluation this summer was an amazing sense of accomplishment.”

Kumaran and Schmolzer are evaluating and testing RETAIN this summer. This fall, Bulitko will work with a team to implement changes based on their addressed needs and is considering the use of augmented and virtual reality technology for RETAIN. The researchers hope to begin a study soon to evaluate RETAIN’s effectiveness. If successful, a video game could in short order have a real-world impact in helping health professionals save newborn infants in the delivery room.

“It still needs to be proven, but we believe strongly that RETAIN could have a significant outcome on the training of health-care professionals who need up-to-date resuscitation skills,” says Kumaran.