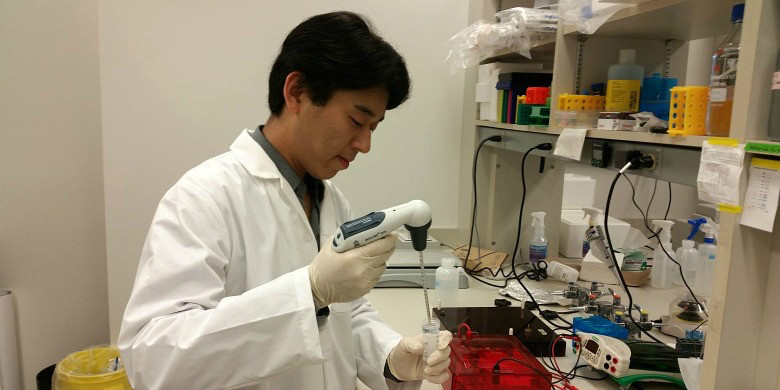 UAlberta researcher Toshifumi Yokota is one of 11 principal investigators from universities across Canada helping to launch the new Neuromuscular Disease Network. The network will improve access to information, resources and connections for patients and families.

Yokota is one of 11 principal investigators from universities across Canada helping to launch the new nationwide network, the result of a three-year, $575,613 investment from a Canadian Institutes of Health Research Network Catalyst grant and $155,820 from Muscular Dystrophy Canada.

The network will empower patients and families through improved access to information, resources and connections through a patient portal.

According to the U of A researcher in the Department of Medical Genetics, the portal will give patients and their families, and researchers, a more complete picture of the work being done across the country.

The network will also play a role in hosting meetings to bring together people affected by or working to prevent neuromuscular disease. The hope is to promote teamwork, with an aim to ultimately improve clinical care and education. Though patients and their families are the big winners, the network also promises to have a large impact for those studying the more than 140 conditions that make up neuromuscular diseases as a group.

“The network will result in tremendous benefits to the Canadian neuromuscular disease community,” says Catherine Sherrard, CEO of Muscular Dystrophy Canada, “including increased access to a broader range of range of multidisciplinary expertise and enhanced collaboration among researchers improving the effectiveness of research dollars and the speed with which treatments can be translated from bench to bedside.”

Although the new initiative does not include a patient registry, it is expected to lead to new opportunities. “This network can also help research,” says Yokota. “For example, we use muscle cells obtained from patients, because we are working with gene therapy and many of them are mutation-specific, so we have to obtain muscle cells from patients with specific mutations. Therefore, if the connections between researchers and patients become better, it’s beneficial to researchers as well through better access to the patient samples and information.”

Yokota is excited to see what the future holds. His work with gene therapy to prevent the progression of diseases such as muscular dystrophy is leading to a phase-three clinical trial later this year. Early findings are promising, and he has high hopes his work could lead to new treatments ahead.

“The drug currently under clinical trial can treat only about 10 per cent of patients, so we are working on expanding the applicability of this type of drug. We hope to develop new drugs to treat the majority of patients,” he says. And when that happens, Yokota hopes the new Neuromuscular Disease Network can help spread the word across Canada.