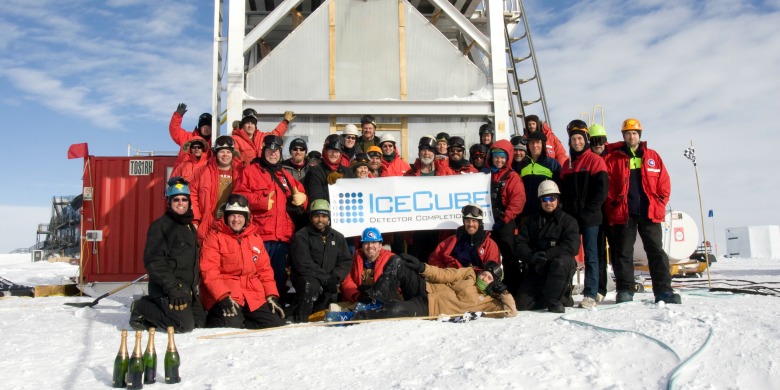 131213-icecube-discovery-banner
IceCube Collaboration scientists toast the completion of their Antarctic particle detector in December 2010. Now they have a new reason to cheer. (Photo: Chad Carpenter. IceCube/NSF)

(Edmonton) It’s not every day that one has a hand in creating a new scientific field that could vastly improve our understanding of the universe. But that’s just the kind of month it’s been for Darren Grant and an international team of scientists who found the first evidence of high-energy neutrinos from outside the solar system.

Grant, a physicist in the Faculty of Science at the University of Alberta, led Canada’s contributions to the IceCube Collaboration, which includes 250 scientists from around the globe. Their cosmic neutrino discovery, described as the dawn of neutrino astronomy after it was published last month, has been named 2013 Breakthrough of the Year by Physics World magazine.

"It’s icing on the cake,” said Grant of the latest accolade for IceCube. “A project like this is high risk, but it also brings a very high reward. Being part of this collaboration, which is basically at the threshold of a new field, has been an incredible experience.”

Neutrinos are neutral, subatomic particles that travel at nearly the speed of light, unaffected by magnetic fields and rarely impacted by matter—making them a perfect tool in understanding galactic phenomena.

Trillions pass through the body every second, originating in places such as the sun or Earth’s atmosphere, and even much further afield like exploding stars. Finding high-energy neutrinos emanating from outside the solar system proved elusive until last month, when the IceCube Collaboration published its findings about 28 events, using a particle detector under a kilometre of Antarctic ice.

Instead of pointing a telescope and using light to unlock mysteries of the universe, Grant explained, scientists hope to track neutrinos back to their point of origin, such as a supernova, and learn more about them.

“The ability to detect cosmic neutrinos is a remarkable achievement that gives astronomers a completely new way of studying the cosmos,” said Hamish Johnston, editor of physicsworld.com, about IceCube being awarded Breakthrough of the Year. “The judges of the 2013 award were also impressed with the IceCube Collaboration’s ability to build and operate a huge and extremely sensitive detector in the most remote and inhospitable place on Earth.”

Grant said the discovery has provided a boost for his team and for physics research in general at the U of A. The overwhelming public reaction has also drawn an important link between the value of fundamental research and what new discoveries may lead to.

Grant was recently named co-leader of the Precision IceCube Next Generation Upgrade, or PINGU. That work is a further extension of IceCube and uses some of the same detector technologies to better understand the fundamentals of the neutrino itself—research that will be at the leading edge in the world.

“IceCube is a wonderful collaboration to be part of in that you have a special mix of really broad fields that are coming together on a single project,” said Grant.

“It’s been great for me and my students and it’s been an incredible opportunity to carry out this research at the U of A.”