NFL-funded study looking at best way to tailor rehab program for athletes who get a concussion. 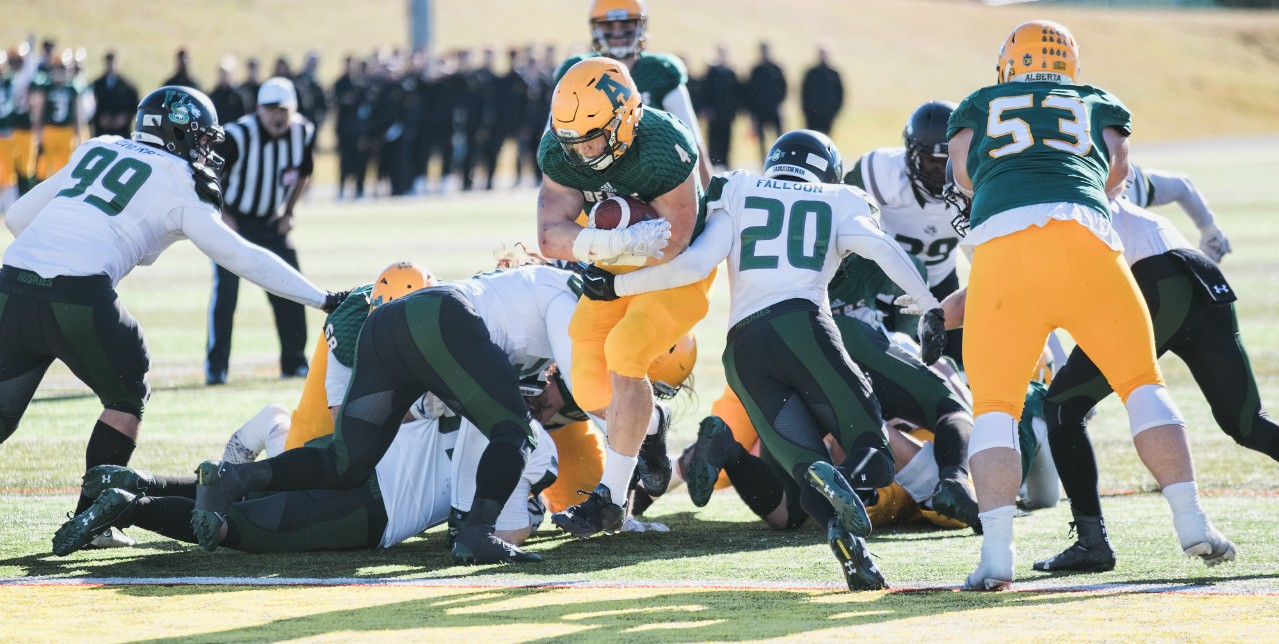 U of A athletes are taking part in an NFL-funded study comparing active rehabilitation for concussions with the current approach. (Photo courtesy Golden Bears and Pandas Athletics)

In an effort to find a way to deliver better outcomes for athletes who suffer from concussion, University of Alberta athletes and researchers are immersed in an extensive international research study comparing a new way to treat concussions with the current protocol.

“We used to tell players to rest and sit in a dark room until they felt better,” said Martin Mrazik, a U of A clinical neuropsychologist who researches concussion. “First, who wants to do that and second, research found it wasn’t helpful.

“The new active rehab we’re testing is more about tailoring the rehab based on the individual.”

For the two-year study, which is funded by the National Football League and is at the halfway point, athletes are put through a baseline assessment at the beginning of the year. Although it is normal for athletes to undergo some mental benchmarking, Mrazik said the study added a number of questions to flush out variables that may be associated with concussion risks, like mental health or a learning disorder.

One of the baseline assessments, near-point convergence, is a new concussion diagnostic tool being tested as part of the study. It measures the eyes’ ability to track a target, such as a moving finger.

“If you have a concussion, suddenly the spot at which an object gets blurry is a lot further out or the athlete can’t focus at all,” explained Mrazik, who added the tool is being tested in clinical trials to determine how it might help assess an athlete with a suspected concussion.

Active rehabilitation puts athletes through a series of activities designed to target concussion symptoms within 24 to 48 hours of the injury—a move intended to speed up the process and tailor the recovery to the individual, said Mrazik. This means the deficiency caused by the concussion—from dizziness and balance to headaches and cognitive difficulties, whether it be attention or memory—will dictate the recovery plan.

“Not every concussion is the same,” he said. “For instance, in the initial assessment, if an athlete is dealing with a lot of balance and dizziness issues, then they will be put through steps that will include very easy balance activities to start with.

“More and more complexity will be added, that way the symptom or difficulty will be targeted,” said Mrazik.

He said another evaluation is conducted after one week to make sure an athlete’s functioning is returning back to normal. Thirty days later, the athlete is evaluated again.

“If you rehab something and strengthen it, the goal there is you have not only helped the athlete recover but given them some tools to prevent further injury,” Mrazik explained.

The U of A athletes participating in the study play football, hockey, rugby, volleyball and soccer—sports with varying degrees of concussion likelihood.

Despite concussions being associated with sport since the dawn of competition, research into how to treat these head injuries is relatively limited.

In 2008, the world’s concussion research community gathered in Zurich and emerged with the first concussion protocol based largely on anecdotal evidence and limited research: rest.

Just as the prescription for soft tissue injuries evolved from rest as the best medicine to a formula that underscored the need for mobility in the healing process, a regime of mild activity within three days after a concussion, while still heeding the need for rest, began to creep into many protocols.

“What researchers began to see was the activity didn’t impede recovery and, in fact, athletes were feeling better because they were engaged in some type of physical activity,” Mrazik explained.

Within a couple years, sporting associations began adopting the current gold standard—a six-step concussion protocol that still preaches rest, but encourages light general activity before a steady increase in exertion and eventually a return to play.

The problem with the current iteration, however, is the lack of data regarding its effectiveness and its generic nature. In some cases, Mrazik said, it would hold back athletes who accelerated through the protocol, while others would languish at a step.

“If you are just doing the six steps and you don’t feel good when you ride a bike, you are just going to stay at that level,” he said. “We also want to make sure we aren’t slowing down their return to play by saying, ‘No, you have to do these six steps.’”

Mrazik is co-leading the U of A end of the study along with Dhiren Naidu, U of A physiatrist and sports medicine physician; Joan Matthews-White, head athletic therapist at the U of A; and her team of athletic therapists who work with varsity athletes.

The study is being conducted with 11 other U.S. and Canadian university sport programs, the Canadian Football League and professional rugby associations in Ireland and New Zealand.