U of A historian’s account portrays the legendary Mountie as a devoted family man. 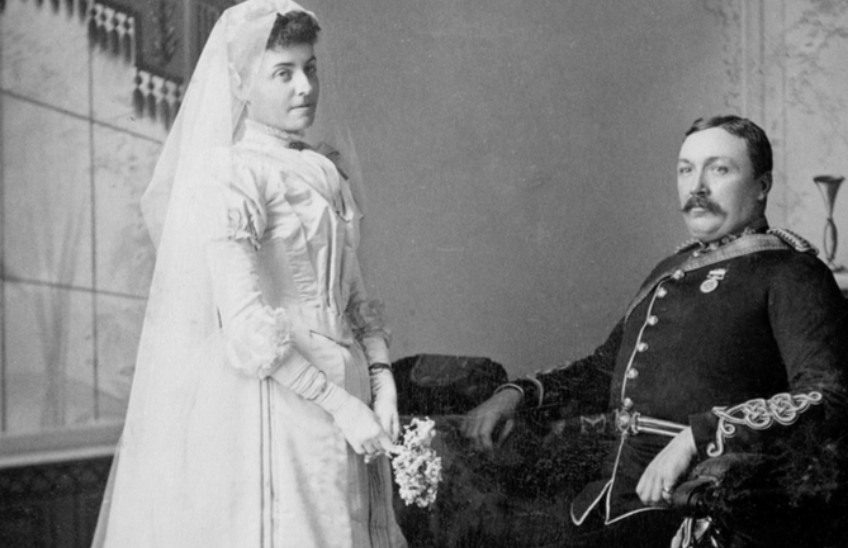 Sam and Marie Steele pose for their wedding photograph in 1890. Their marriage "would survive separations half a continent and even half a world apart, and ... ended only with Sam's death," writes Rod Macleod in his new biography of Steele. (Photo: Bruce Peel Special Collections, 2008.1.1.5.3.1.2)

Pick any major event in the decades following Confederation and chances are Sam Steele, the legendary founder of the North-West Mounted Police, was there, imposing order on the Klondike Gold Rush, supervising the building of the CPR, witnessing the signing of treaties on the Prairies and helping suppress Louis Riel’s Red River Rebellion.

While Steele’s professional life has been well documented—partly because he published his memoirs, Forty Years in Canada, in 1914—a new book by historian and University of Alberta professor emeritus Rod Macleod reveals the private side of Steele’s life.

In Sam Steele: A Biography, Macleod writes that “it would be easy, and totally misleading, to get the impression that family life was unimportant to him. On the contrary, from his marriage until the end of his life, every major decision he made about his career revolved around their interests.”

Macleod uncovered that detail, along with many others, after spending almost 10 years of painstaking research poring over a mammoth collection of Steele’s letters, diaries and photographs the U of A repatriated from Steele’s descendants in London, England, 11 years ago.

What emerged from The Sir Samuel Steele Collection—purchased for $1.8 million and now housed in the U of A’s Bruce Peel Special Collections library—is a man passionately devoted to his family.

"He wrote constantly, especially to his wife,” said Macleod. “When he was up in the Yukon or in South Africa, he would write to her three times a week—big, long letters.

“He also had a whole slew of friends around the world that he wrote to. If Twitter had been around in his day, he would have been right in there."

As a seasoned historian who had just completed a short profile of the famous Mountie for the Dictionary of Canadian Biography, Macleod figured he was well placed to take a deep dive into the newly acquired archive when he started out. He had just finished his history of the U of A—All True Things—so the timing couldn’t have been better.

"It turned out to be a much bigger job than I expected,” he said. “The papers are massive, literally thousands of documents, and unfortunately his handwriting was really bad."

Penmanship notwithstanding, Steele was unusually prolific, scrawling as many as 20 missives on a typical evening after a full day of police work.

Many of those letters were to his children. "They are there big-time in the diaries and letters," said Macleod.

Despite his devotion to family, however, Steele spent many years away from them, forced to communicate through letters. A hugely ambitious man, he jumped at the chance to fight in South Africa’s Second Boer War as commanding officer of Lord Strathcona’s Horse.

And despite his advancing age almost two decades later, he also enlisted to serve in the First World War.

Calling him a “man of enormous physical strength and endurance,” Macleod said Steele was “actively working all the time to make sure he was at the centre of the action, and was prepared for whatever came up. He constantly studied."

The future Mountie first joined the militia in his teens, taking courses to qualify as an officer. But when he signed up for the Red River expedition against Louis Riel’s provisional government, it was not as an officer.

“He went as a private—he saw this as a learning opportunity,” said Macleod. “Right through his time as a major general in the First World War, he was always in touch with what the guys in the ranks were thinking, and open to learning."

Later in life, Steele made the North-West Mounted Police famous around the world, especially for his effective and orderly oversight of the Klondike Gold Rush of the late 1890s. By 1898 he commanded the police force in the entire Yukon region.

In the end it was diabetes that finally defeated Steele at the age of 70, a disease he denied having even on his deathbed.

After his death, his children only helped stoke the myth of the invincible hero, maintaining he succumbed to Spanish influenza “to uphold the fiction that a healthy Sam was prematurely and unjustly retired,” said Macleod, ”struck down suddenly in his prime rather than wasting away from a lengthy and debilitating illness.”

The University of Alberta Press is hosting a book launch for Rod Macleod’s Sam Steele: A Biography tonight at 7 p.m. at the Alberta Aviation Museum. The event is free and all are welcome.