Team assembled by FoMD researcher publishes findings in PLOS One. 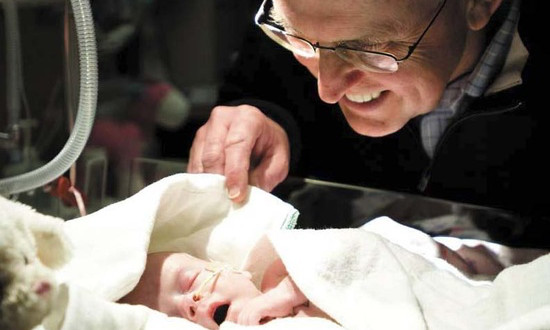 An international team of researchers assembled by David Olson, a professor of obstetrics and gynecology in the Faculty of Medicine & Dentistry, has developed a blood test to identify pregnant women at risk of delivering babies prematurely—before the usual 40 weeks of gestation. The study was published in the journal PLOS One.

The team, consisting of clinicians, scientists and biostatisticians, looked at women who participated in the All Our Babies (AOB) study —a community-based pregnancy study in Calgary. The researchers collected blood from pregnant women at 17 weeks and at 27 weeks. They looked at gene expression, profiling and bioinformatics. When coupled with a patient’s clinical history, they discovered they could predict whether or not a woman would deliver prematurely.

"This new test is important for several reasons,” says Olson. “It has the ability to predict which women may go into preterm labour. About eight out of 10 women who present with symptoms will not deliver early and will deliver at normal term. This new test has high positive predictive power for women who will deliver early. It is also important because it will help in the development of new drugs and interventions to delay preterm labour and prolong pregnancy for the benefit of the baby."

Preterm birth has been identified by the World Health Organization as the number one pregnancy and perinatal health problem in the world. Each year there are 15 million preterm births globally. Of those, one million babies will not survive. As a group, infants who are born preterm will also experience a higher incidence of health problems in their lives, including obesity, diabetes, behavioural problems and cardiovascular and inflammatory diseases.

The research used data from approximately 3,300 pregnant women in Calgary who were recruited beginning in 2008. The work was funded by Alberta Innovates – Health Solutions.

“Alberta has one of the highest preterm birth rates in Canada,” says Pamela Valentine, AIHS CEO (Interim) and Transition CEO for Alberta Innovates. “Preventing premature birth is key to healthy moms and babies. We congratulate the Preterm Birth and Healthy Outcomes Team on making such a remarkable discovery. This type of collaborative research and innovation will put Alberta at the forefront of understanding premature births, which will benefit women not only in Alberta but around the world.”

According to Olson, the test still needs refining before it can make its way to clinical use. With further studies already planned, he hopes that can be accomplished in the next few years. He also believes it’s just the beginning of many important discoveries to come..

“There is a need for new diagnostics and this paper is a breakthrough in that area,” says Olson. “It’s opened up new areas of research that people here in Alberta and around the world are now starting to explore.”

Meet our partners in innovation

Jan Heng, PhD was a postdoctoral trainee working under the supervision of Stephen Lye, PhD at the University of Toronto, when she made the discovery. She is now at Harvard Medical School. She was the first author of the publication:  Maternal Whole Blood Gene Expression at 18 and 28 Weeks of Gestation Associated with Spontaneous Preterm Birth in Asymptomatic Women, in the June edition of PLOS ONE.

David Olson, PhD is a Profesor of Obstetrics and Gynecology in the Faculty of Medicine & Dentistry at the University of Alberta. He is also a member of the U of A’s Women and Children’s Health Research Institute (WCHRI).

The Preterm Birth and Healthy Outcomes Team was funded by a five-year, $5-million grant from Alberta Innovates – Health Solutions.

In Fall 2016, AIHS will be consolidated with the three other Innovates agencies to become Alberta Innovates, providing centralized access to services and supports to innovators, researchers, industry and partners. www.aihealthsolutions.ca