New cancer screening technology on its way to commercialization 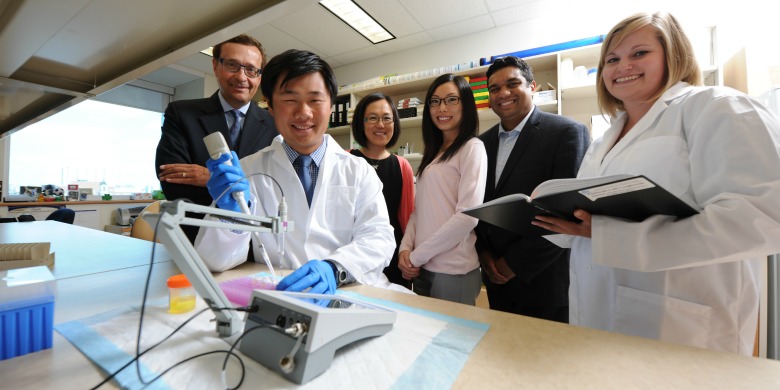 The founders of UAlberta spin-off company MTI Technologies Inc. have signed a multi-million dollar licensing agreement for a diagnostic test that detects pre-cancerous polyps in the colon.

(Edmonton) A colon cancer screening test developed at the University of Alberta is on its way to commercialization and potential worldwide use, through a new collaboration with a leading Chinese research institute and a U of A spinoff company.

The groundbreaking research, led by U of A scientists Richard Fedorak and Haili Wang, has the potential to save lives through early and non-invasive diagnosis of precancerous polyps in the colon.

The collaboration, supported by Alberta’s Ministry of Enterprise and Advanced Education, enables the spinoff company Metabolomic Technologies Inc. (MTI) to begin validation trials in Canada and China for the promising new diagnostic test, known as PolypDx™. BGI Shenzhen, a leading research institute in China, will run validation trials in that country and is partnering with MTI to develop the diagnostic tests for the Chinese market.

The partnership demonstrates the U of A’s global impact in discovering and advancing life-saving research, said Lorne Babiuk, vice-president of research.

“The U of A has long been a leader in fundamental research and technology breakthroughs, both of which pave the way for innovations like PolypDx,” Babiuk said. “This type of discovery holds immense potential for widespread application and significant health, social and economic advancements here in Alberta and around the world.”

PolypDx will eventually be marketed worldwide by MTI, a company formed by Fedorak and Wang with the assistance of the U of A’s business incubator, TEC Edmonton.

Fedorak and his team, after developing the simple urine test to detect precancerous polyps, leveraged the U of A’s extensive global research network to partner with BGI Shenzhen.

The metabolomics technology, based on metabolites in the body that can be used as biomarkers to determine a person’s health, is proving up to 70 per cent more accurate than the fecal-based tests in detecting precancerous polyps in the colon, Fedorak said. In addition, the spot urine sample format of PolypDx will lead to greater patient compliance compared with the fecal-based tests.

Colon cancer is one of the most common types of cancer in the world, yet is preventable and treatable about 90 per cent of the time if detected early in the precancerous polyp stage, he added. The current fecal-based tests tend to detect colon cancer, whereas PolypDx is designed to detect precancerous polyps before they develop into cancer.

“The technology developed through this research with our fellow scientists at BGI opens the door to more easily detecting cancer on a global scale,” Fedorak said. “It is something that can ultimately play an important role in preventative management for health care.”

New cancer screening technology on its way to commercialization