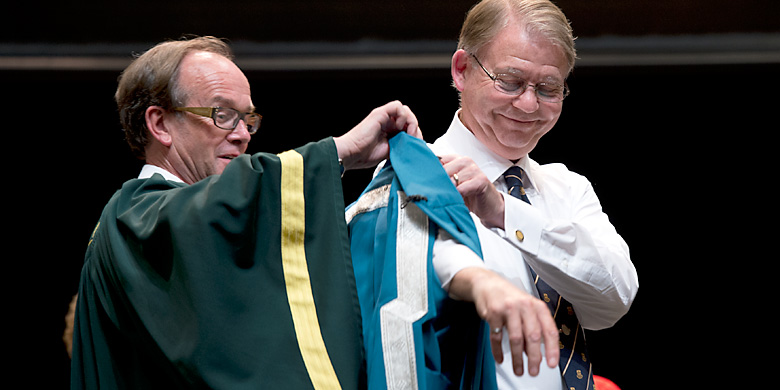 (Edmonton) Ralph Young talked fondly of the steely determination of his grandmothers after being installed as the University of Alberta’s 20th chancellor in closing out the 2012 spring convocation ceremonies June 13.

In a talk whose lone theme was hope, Young expressed his affection and admiration for both his grandmothers, who raised large families of seven and 11 children through the Pandora’s box of their generation, the Great Depression, on nothing more than hard work, faith and the notion that, in the words of one grandmother, “There’s no such word as can’t.” “Your families have seen much of their hopes fulfilled today,” he said. “I know what it meant to my two grandmothers who endured much.”

Earlier in his address, Young, the longtime CEO of Melcor Developments, as well as U of A friend, advocate and alumnus, said that there was nothing new he could shed on the concept of hope, but that today would be a worthy time to reflect on this fundamental life principle. “Hope is about the future and gives meaning and purpose to our lives.”

Young began by quoting from psychologist and Holocaust survivor Viktor Frankl’s Man’s Search for Meaning, “Our main motivation for living is our will to find meaning—hope—in life.”

“Hope is what inspires humankind and its absence creates one of our most desperate conditions,” explained Young. “I know that many of you have experienced some feelings of despair as you have dealt with many challenges to reach this day.

“We are all here today because of hope, and I assure you that you have created some of the conditions for it to flourish in your lives.”

Young talked about the hope that family, friends and faith provide, and how the search “for truth, for enlightenment, for progress, are part of the foundation of hope.”

“Hope and adversity are complementary and adversarial concepts,” he said. “Great teachers and great leaders have all expressed this fundamental truth. You undoubtedly have already experienced or will discover how hope can overcome adversity.”

Young used his talk to reflect on inspiring Canadian leaders—Chief Poundmaker (1842–1886), leader of the Plains Cree, Red Pheasant Band, signatory to Canadian treaties in 1876, and voice of reason during the North-West Rebellion; Louis Riel (1844–1885), Canadian folk hero and leader of two rebellions against the Canadian government, who helped negotiate Aboriginal, Métis and Canadian rights in Western Canada and is considered the father of the province of Manitoba; and Samuel Steele (1848–1919), famed lawman who policed the wild West during the Riel rebellions, the building of the railroad and the Klondike—all of whom were born before Canada became a nation, and all of whom were either executed as traitors or, in the case of Steele, estranged from the nation they helped forge.

“What does this say about hope?” asked Young. “Perhaps that, at times, hope is elusive—it hides in dark corners or dark moments, but it shines on starry nights and in the eyes of our children. I encourage you to hold on to the hope here in this auditorium today.”

Young also listed each chancellor during his 43-year involvement with the U of A, beginning with Louis Desrochers, “who signed my degree,” to outgoing chancellor Linda Hughes, “who signed your degree.”

“Linda is a person of remarkable grace, dignity, compassion and wisdom,” said Young, who thanked Hughes for her four years of “dedicated and exemplary service as chancellor.”

Hughes wished Young well on his latest in a long list of non-student roles at the U of A that began during his MBA days as a teaching assistant and president of the MBA Association, and grew to include, among other things, a seat on the board of governors and the university senate alumni council, as well as heavy involvement in the University of Alberta School of Business.

“Being chancellor is a wonderful experience; I’m sure you will enjoy it, Ralph, and I know the university is very lucky to have you,” said Hughes.

Provost Carl Amrhein, who oversaw the introduction of Young as the U of A’s 20th chancellor, said with installation of a new chancellor, “We are repeating an ancient tradition that renews the social contract between a university, especially public in our case, and the state, government and society.”

Amrhein said the importance of this renewal couldn’t be overstated, pointing to the distinguished guests in attendance representing each facet of the university’s place in society.

“It is rare that all are on stage together at the same time,” said Amrhein, adding it is fitting that the ceremony takes place during the convocation of arts graduates, who have the special role of watching, studying and commenting on society. “It also, in the year of the Diamond Jubilee, is a poignant reminder of the special place we as a university have in society over the many centuries of our existence as a type of organization.”

The tradition associated with the occasion was not lost on Young, who vowed to “embrace our university’s commitment to contribute to the public good through teaching, research and citizenship. I wholeheartedly accept the trust placed in me by the university senate and accept the privilege of serving with them for the next four years.”