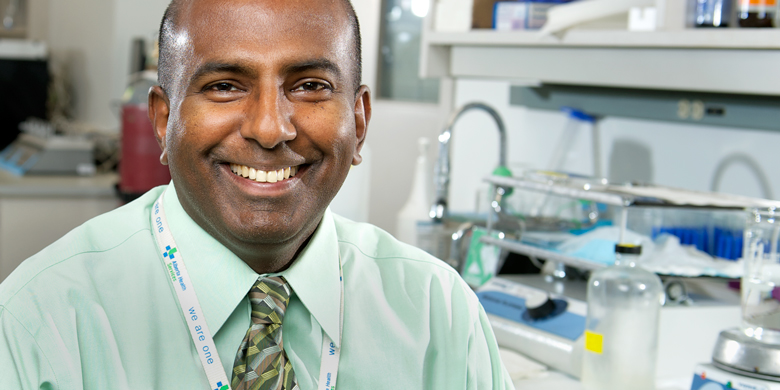 Gavin Oudit led a team of UAlberta researchers that created a synthetic form of the peptide apelin. The breakthrough could lead to a new class of drugs for heart disease, high blood pressure and diabetes. (Photo: Richard Siemens)

(Edmonton) Researchers at the University of Alberta have developed a synthetic peptide that could be the first in a new class of drugs to treat heart disease, high blood pressure and diabetes.

Researchers at the U of A found that a deficiency in the peptide apelin is associated with heart failure, pulmonary hypertension and diabetes. They also developed a synthetic version that targets pathways in the heart and promotes blood vessel growth.

“It’s a new group of drugs that we hope can be used for a wide variety of disorders, all of which have a huge economic burden on the health-care system,” said Oudit, a cardiologist and clinician-scientist at the Mazankowski Alberta Heart Institute.

Oudit’s research group studied apelin deficiency in the hearts of mice and humans through the Human Explanted Heart Program, or HELP. The HELP program allows for the study of specimens obtained from patients undergoing a heart transplant.

The research team found that hearts from patients who suffered heart attacks were deficient in apelin, which is needed for angiogenesis—the formation of new blood vessels that helps the body adapt after tissue damage from heart attacks.

Oudit’s team has filed a provisional patent on the synthetic apelin and will continue work developing the drug to be more potent and clinically applicable. Once the drug is perfected, they’ll move into the first phase of clinical trials in two to three years.

Oudit said the breakthrough could not have happened without the contributions of U of A colleagues, including John Vederas, a medicinal chemist and professor in the Department of Chemistry, and Allan Murray, a clinician-scientist and nephrologist in the Department of Medicine. Wang Wang and Shaun McKinnie, both PhD students in Oudit’s and Vederas’s laboratories, also played a key role in this discovery.

“Having this kind of environment that’s multidisciplinary and collaborative is absolutely critical to take a discovery to the next level,” Oudit said. “We showed this kind of translational work can be done here, in Edmonton, at the University of Alberta.”

The study was published in the August issue of the Journal of the American Heart Association. Oudit’s research was funded by the Canadian Institutes of Health Research, Heart and Stroke Foundation of Canada and Alberta Innovates – Health Solutions.