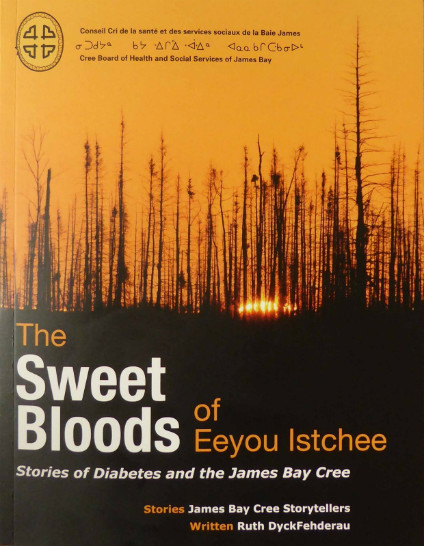 "Sweet Bloods" is a collection of 27 short stories about Indigenous people living with diabetes in the Cree territory of Eeyou Istchee.

Community uses storytelling to overcome stigma of having the disease. 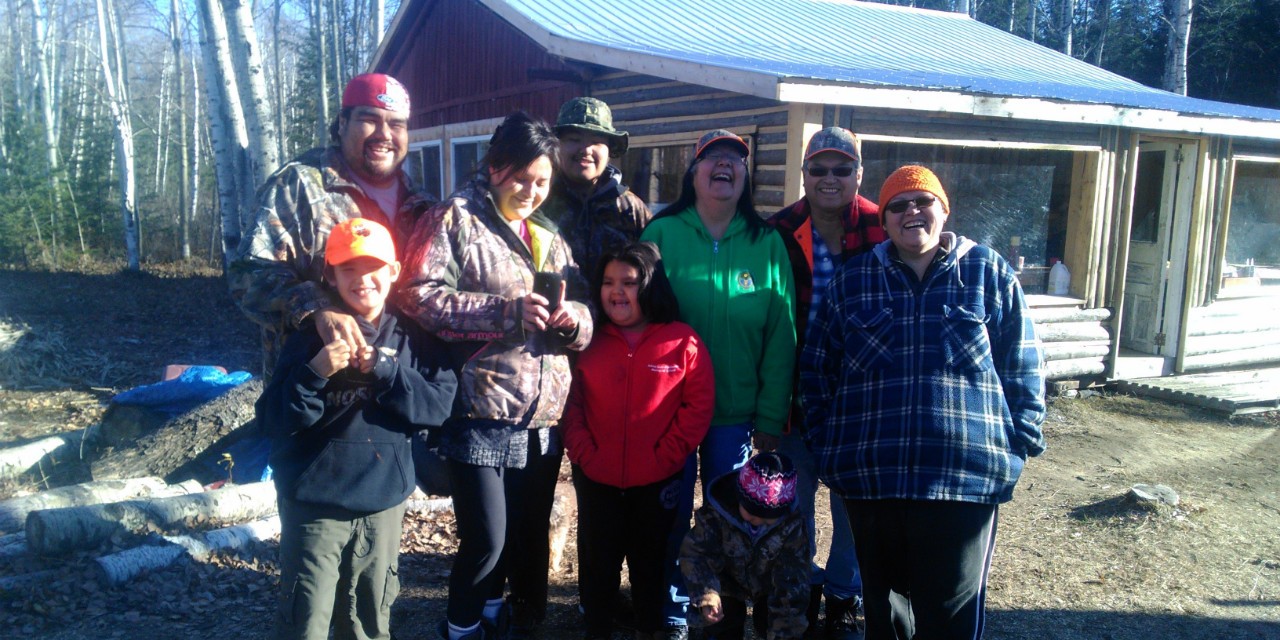 Maggie Etapp (third right) with her husband Simon (second right) and family at their cabin in Gagnon-Siding, Quebec. The Etapps share their story in the new collection.

Growing up near James Bay in the 1960s, and later in residential school, Rose Swallow had never heard of diabetes. She once saw a classmate in high school hike up her skirt and inject herself with a needle. Her first thought was, ‘She must be a heroin addict!’

Then suddenly, in her adulthood, it seemed diabetes was everywhere in Swallow’s northern Quebec Cree community. Life for her people had changed dramatically in the 1970s. The advent of modern technology saw many using snowmobiles rather than dogsleds to hunt and fish, driving to the grocery store instead of walking and spending more of their leisure time watching TV. There was also the cultural disruption of forcing huge numbers of children into residential schools throughout the 20th century.

To help deal with an epidemic that seemed to spread like wildfire around her, Swallow signed on as a community health representative for her regional health board in the 1990s. One day she decided to test her own blood. Sure enough, she had diabetes too.

Swallow’s territory of Eeyou Istchee—encompassing 10 Cree communities spread across 450,000 square kilometres—now has one of the highest incidences of diabetes in the world. It’s estimated one in three adults has the disease, touching virtually every family in the territory.

Despite its prevalence, no one talks about it, according to Paul Linton, associate director of public health for the Cree Board of Health and Social Services of the James Bay.

"There is a big stigma around diabetes in our communities,” said Linton. “It's seen as a disease for weak people, who if they'd only smarten up wouldn't have it. I know of one case where a husband had been diagnosed for two or three years and never told his wife. He kept his pills in the car, taking them on the way to work and back."

A talking circle in print

The prevalence of that stigma is why Linton and his colleagues decided to break the silence with a method they already knew to be effective—storytelling.

The health board commissioned a collection of 27 short stories about living with diabetes that would serve as a kind of talking circle in print. Linton turned to Ruth Dyck Fehderau, a University of Alberta creative writing instructor who was working on a novel in the region at the time, to collect the stories and pull them all together.

“I was thrilled to be asked, and am overwhelmed with gratitude to be involved with this community project," said Dyck Fehderau. "What they were trying to do is get people talking and correcting misinformation, and encourage people living with diabetes to share how they cope or don't cope."

She flew all over the territory interviewing people of all ages—a 15-year-old star hockey prospect forced out of the game by high blood glucose levels, a man who hunts on one leg after a diabetes-related amputation, a woman who has kept her diabetes under control for 30 years but can’t get her doctor to take her seriously.

Dyck Fehderau considered it her mission to honour everyone she interviewed, writing in a transparent, declarative prose style that aimed to capture the spirit and voice of each storyteller. She made repeated trips back to the storytellers to make sure they were satisfied with her renderings.

The result, just released, is The Sweet Bloods of Eeyou Istchee: Stories of Diabetes and the James Bay Cree. They are widely varied accounts of resilience and adaptation, says Dyck Fehderau, and yet strike an unmistakable common chord: diabetes in James Bay, as in so many Indigenous communities around the world, cannot be separated from colonization.

The effects of colonization

“The causes of diabetes are not just a cluster of bad choices,” she said. “That explanation is far too simple.” Diabetes was virtually unheard of before colonization, she said, coming on rapidly as lifestyles shifted in the late 20th century from traditional to modern.

The James Bay Hydroelectric Project of the mid-1970s, for example, had a massive impact on the territory. Nine rivers were diverted, flooding 11,500 square kilometres of traditional hunting land and interrupting migration routes for wildlife.

“One community lost 90 per cent of its water flowing into James Bay,” said Dyck Fehderau. “Saltwater washed back upriver from the bay and fish died, forcing people off their traditional diet.”

To build the dam, a 620-kilometre-long highway was also cut through Eeyou Istchee. "With the highway came still more colonizers, still more processed foods, more exercise-avoidance machines, more disruption of food and water livelihood, and more stress,” writes Dyck Fehderau in an essay at the back of the book.

"When it comes to diabetes, I heard it again and again—trauma matters a great deal. Storytellers spoke to me of the ways in which trauma had disrupted their spiritual health, intellectual health, emotional health and physical health."

Medical practitioners are now well aware of the close relationship between stress and insulin resistance, and there was perhaps no collective experience more stressful than residential schools. Children were often abused, starved and fed unfamiliar diets, says Dyck Fehderau. It is a theme that comes up frequently in The Sweet Bloods of Eeyou Istchee.

"Outside the schools, transport trucks, rolling up on new roads from the south, hauled boxes and boxes of processed foods to be sold in stores, loaded with starches and other ingredients that raised blood glucose and made diabetes onset much more likely," writes Dyck Fehderau.

Refusing to be victims

But if the link to colonization is one common thread—along with the striking failure of the medical system in some cases to pass on accurate information about living with diabetes—so is a refusal by the storytellers to be victims. In most cases the disease figures simply as background noise, a mere inconvenience: “More than anything, they are just stories about living in the North, and diabetes is just one part of it.”

For instance, while working on the project, Dyck Fehderau heard about one man who would hunt while dragging along an IV pole. "How do you manage a gun and the silence that's necessary with an IV pole? This is not victimhood,” she said.

“This is agency, capacity and creativity—problem-solving in ways we can't imagine. It can't be overemphasized how adept these communities are.”

Still, misconceptions of diabetes do abound, hence the urgency to get people talking and sharing personal strategies. Though the material was originally written for First Nations, Inuit and Métis peoples of Canada, the Cree Board of Health and Social Services decided to make it available to the public. All proceeds from sales of the book, including on Amazon.ca, will go toward providing long-term health care for people with diabetes in Eeyou Istchee.

"Hopefully these examples will show people that, yeah, these people have diabetes but they're also leading a successful life," said Linton.