New dean to lead Faculty of ALES into its second century 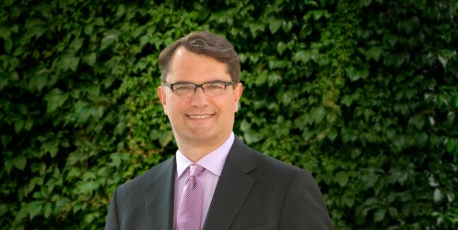 (Edmonton) Stanford Blade, chief executive officer of Alberta Innovates – Bio Solutions, has been named as the new dean of the Faculty of Agricultural, Life and Environmental Sciences, effective Aug. 1, 2014.

“We have all these great people within the faculty addressing key issues of importance to Alberta and the world. For me, the role of dean will provide a great opportunity to position our work, to articulate the importance of generating new knowledge and the potential it has to solve not only some of the problems that Alberta is facing, but also problems that exist across the globe,” said Blade.

“It is the perfect fit for that curious farm kid who had a fascination with science.”

Blade succeeds John Kennelly, who has been dean since 2004.

“Dr. Blade looks forward to celebrating the faculty’s centenary in 2015,” said Carl Amrhein, provost and vice-president (academic). “He plans to set the trajectory of the faculty by helping to develop a shared vision within the group and working to find the resources to ensure that the faculty is an integral part of both the provincial and global communities.”

Growing up on the farm in the County of Leduc, Blade developed the early and deep appreciation for agriculture that only kids who grow up on farms truly understand, and took it a step further.

An interest in the science of agriculture

“I grew up in an agriculture community and have a real sense of that community, but my interests were much more on the science side of things, of thinking more about genetics and a research career,” says Blade, who recalls making trips to the U of A as a youngster for university farm field days. “I remember they were monitoring temperature regulation in sheep and a whole array of things that started to pique my interest.”

Later, Blade says he watched as new crops and practices—some developed at the U of A—improved economic returns and enhanced the sustainability of nearby farms. Those first encounters with the U of A helped nurture both his interest in science and his affinity for the U of A. In 1981, Blade graduated from the university with a bachelor of science degree.

Upon graduation, Blade embarked on a life-changing opportunity—a two-year volunteer teaching position in the West African country of Cameroon. “It was there that all of a sudden this idea of the role of agriculture in international development—and not just agriculture as a driver of social development—all just came together for me.”

Blade returned to Canada, where he completed a master of science degree in plant science at the University of Saskatchewan, then went back to sub-Saharan Africa as a Commonwealth Scholar before earning his PhD at McGill University.

"The U of A has a huge capacity for creating new knowledge and producing the kinds of ideas that are going to change the way the world works."

Blade made his way back to Alberta, where he took a job as a research scientist with the Ministry of Agriculture, Food and Rural Development. For the next decade, often in collaboration with U of A researchers, he explored his many research interests, including the breeding of new pulse crops—which resulted in the creation of a cultivar of field pea (Cutlass) that still serves as the benchmark for all new pea varieties being registered in Western Canada—along with fibre and medicinal crops, spices and diversification beyond traditional commodity crops. During this time, he also served two terms on the U of A Senate.

Blade would add to his responsibilities as a researcher, becoming director of the province’s Crop Diversification Division and as deputy director general (research) for the International Institute of Tropical Agriculture in Nigeria in 2004, before beginning work on the idea of a provincial funding agency, which at that stage “was just a thought in the minds of a few people.”

First as executive director of the Alberta Agricultural Research Institute, and then as CEO, Blade participated in the creation of Alberta Innovates – Bio Solutions, an agency of the Alberta government focused on research and innovation to support the profitability of the agriculture, food and forestry sectors. Blade had been responsible for the startup of the organization—developing strategic and business plans, recruiting great staff, empowering an engaged executive team and creating a culture of innovation resulting in a $85-million portfolio with a total project value of $250 million.

The position has meant strong ties with the U of A and the centres, chairs, programs, projects, international collaborations and technology conferences within the Faculty of ALES that he has championed investment in.

A vision for success

Blade, who is an adjunct professor in the faculty, says his vision for building on its success is focused on three key areas: strengthening engagement with the Government of Alberta, forging deeper partnerships with non-government agencies, and creating and executing a thoughtful and intentional communications strategy.

“My job is to figure out where we want to go on the horizon, and begin talking about it,” he said. “Pretty soon it doesn’t seem like words on a page, and people begin to grasp that this is where we’re going, these are the kinds of things we might be able to do together. And then all of a sudden, people are keen to join in the effort.”

The end result, Blade says, is the faculty playing a larger role in solving some of the world’s biggest issues—food security, nutrition, energy, the idea of sustainability and climate change, to name a few.

“What I have always liked about the university, and certainly what I hope to help facilitate, is this idea of the academy working together, of an increased focus on integration of skills, certainly within our department and across our faculty, but also reaching out to groups across the university. The U of A has a huge capacity for creating new knowledge and producing the kinds of ideas that are going to change the way the world works.