UAlberta engineering and pharmacy researchers design micro-scale device to trap bacteria and find out which antibiotics will work against them. 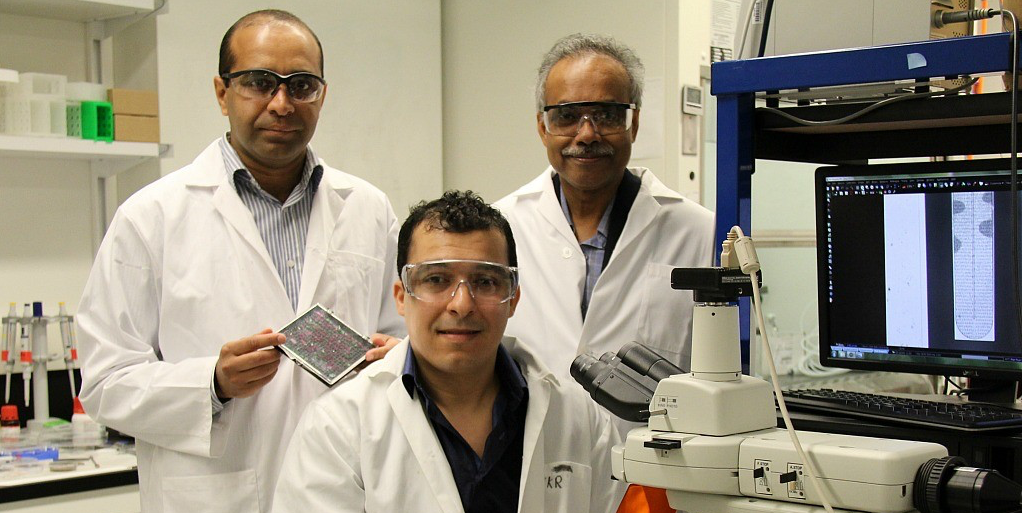 (From left) Faheem Khan, Hashem Etayash and Thomas Thundat designed a device capable of detecting specific bacteria, then determining which drugs they are most susceptible to. (Photo: Faculty of Engineering)

University of Alberta engineering and pharmaceutical researchers have invented a device that can rapidly identify drug-resistant bacteria, then find out which antibiotics are most effective against them.

Rather than growing bacterial cultures and then testing them—a commonly used but time-consuming approach—the microscopic device relies on nano-scale technology for fast results.

The main feature of the device is a cantilever—a plank that resembles a diving board—that has a microfluidic channel 25 times smaller than the width of a hair etched on its surface. The channel is coated with biomaterials, like antibodies, that harmful bacteria like E. coli or Listeria in fluid samples stick to.

When bacteria are caught, the device sends out three different signals to researchers.

When bacteria are detected, the cantilever’s mass changes and it bends, explained Thomas Thundat, a professor in the Department of Chemical and Materials Engineering and Canada Excellence Research Chair in Oil Sands Molecular Engineering. “So this gives us two signals: the mass change and the bending action.”

By shining infrared light on the bacteria, a third signal is sent, he added. If the bacteria absorb the light they begin to vibrate, generating a minute amount of heat that sends a confirmation signal.

Having three detection methods “means there is no ambiguity,” Thundat said.

“By monitoring the interaction of light and bacteria, we can get highly selective detection of bacteria,” said Faheem Khan, a researcher in Thundat’s lab. “It’s our moment of truth.”

“We’re trying to find a way to fight bacterial resistance to drugs and prevent or at least decrease the spread of drug-resistant strains,” said Hashem Etayash, a PhD student in the Faculty of Pharmacy and Pharmaceutical Sciences. “We’re able to do several tests in a very short period of time and we can quickly identify bugs that can resist antibiotics.”

The device can be used to test extremely small fluid samples, millions of times smaller than a raindrop. Thundat says the device’s size is advantageous when you only want a very small sample, in settings such as neonatal intensive care units or in situations where only very small samples are available.

The research was funded through the federal Canada Excellence Research Chairs program. The team has patented the technology, and Etayash and Khan are hoping to design a hand-held prototype of the device and bring it to market.

The team’s findings are published in a paper entitled Microfluidic cantilever detects bacteria and measures their susceptibility to antibiotics in small confined volumes in the current issue of Nature Communications.