One-of-a-kind U of A device gives food processors a much faster, better way to check consumables for dangerous pathogens, research shows. 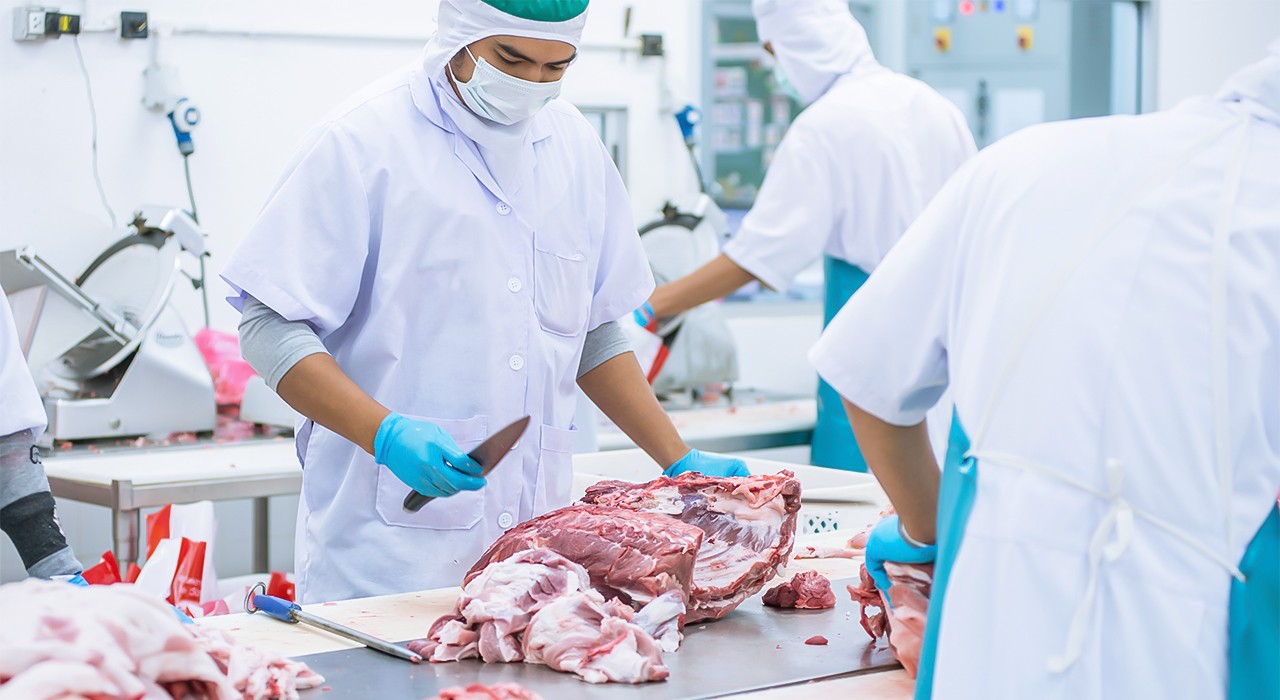 A new user-friendly device developed by U of A researchers can detect foodborne pathogens such as E. coli, among others, much more quickly and more inexpensively than other similar devices. The researchers say it can easily be used at food processing facilities such as meat processing plants. (Photo: Getty Images)

A user-friendly foodborne pathogen detection device developed by a multidisciplinary team of University of Alberta researchers has been shown to be the fastest and most sensitive, according to new research.

“Most methods for screening foodborne pathogens are relatively slow, requiring 24 to 48 hours for results, and resulting in frequent food recalls if pathogens are found,” explained Patrick Pilarski, an engineer in the Faculty of Medicine & Dentistry and a member of the team that was brought together five years ago to design the instrument.

“The results of our recent study set a new standard in rapid and accurate testing for bacteria in a wide range of consumables. It is ready for commercialization. Someone without any expertise in microbiology could perform the test with a single push of a button, and produce results within one shift, for example, at a meat processing plant.”

Specifically, in the PLOS One study, the device, called the GelCycler Mark II, was shown to be capable of detecting and reporting E. coli contamination in 41 minutes.

The key to the device, which in rudimentary terms involves placing a small amount of food on a cassette containing desiccated hydrogel, is the elimination of the bacteria enrichment phase currently used in most testing techniques.

“Because most testing platforms cannot detect a single bacterium, enrichment protocols are routinely used in which bacteria obtained from defined amounts of food product are cultured in broth to increase the number of organisms to a level that is detectable,” explained Lynn McMullen, a U of A food microbiologist and co-author of the study.

"We have coupled the new device with a very short enrichment process that allows us to get a result in less than seven hours.”

“The reality is that currently, meat processors are often holding product to wait for results. The GelCycler Mark II can help get it out the door quicker and reduce the food safety risks for consumers.”

One in eight Canadians will get sick with a foodborne illness, added McMullen.

“As far as I am concerned, there is no excuse for foodborne illness and disease because it is preventable. And prevention starts at the farm and goes through the various production phases to the consumer. So having a rapid testing device that allows processors to be better able to detect problems before they are shipped out the door is an important contribution.”

The project was funded by Alberta Innovates and its partners, with the team brought together by Cornelia Kreplin, executive director of sustainable production/food innovation at Alberta Innovates..

“She knew all of our various expertise and strengths and encouraged us to work together. Otherwise, I wouldn’t have applied to the call for proposals because I certainly don't have the expertise to develop a new detection system,” said McMullen.

“We have to credit her with seeing the bigger picture and pushing us to form a really interdisciplinary team from diverse areas of research.”

“This work is an important step in food safety, and in how an idea is generated to solve a problem,” said Kreplin. “We understand that in today’s marketplace, the key is to accelerate the timeline from an idea to a product. Bringing researchers from different disciplines together to solve problems is essential to that objective.”