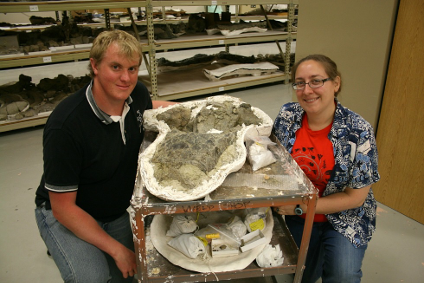 Michael Burns and Victoria Arbour at the New Mexico Museum of Natural History and Science, with the skull of Ziapelta sanjuanensis.

New dinosaur from New Mexico has relatives in Alberta 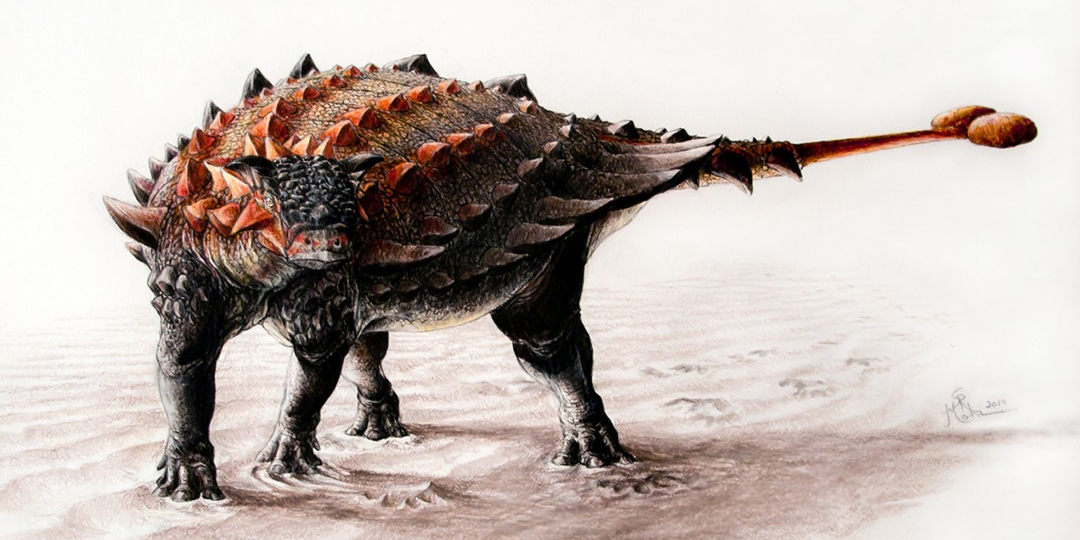 (Edmonton) A newly discovered armoured dinosaur from New Mexico has close ties to the dinosaurs of Alberta, say University of Alberta paleontologists involved in the research.

From 76 to 66 million years ago, Alberta was home to at least five species of ankylosaurid dinosaurs, the group that includes club-tailed giants like Ankylosaurus. But fewer ankylosaurids are known from the southern parts of North America. The new species, Ziapelta sanjuanensis, was discovered in 2011 in the Bisti/De-na-zin Wilderness area of New Mexico by a team from the New Mexico Museum of Natural History and Science and the State Museum of Pennsylvania.

The U of A researchers from the Faculty of Science, including recent PhD graduate Victoria Arbour and current doctoral student Mike Burns, were asked to be part of the project because of their expertise in the diversity of ankylosaurs from Alberta.

"Bob Sullivan, who discovered the specimen, showed us pictures, and we were really excited by both its familiarity and its distinctiveness—we were pretty sure right away we were dealing with a new species that was closely related to the ankylosaurs we find in Alberta," says Arbour.

Ziapelta is described in a new paper in the journal PLOS ONE. It stands out from other ankylosaurs because of unusually tall spikes on the cervical half ring, a structure like a yoke of bone sitting over the neck. Ziapelta’s skull also differentiates it from other known ankylosaurs. 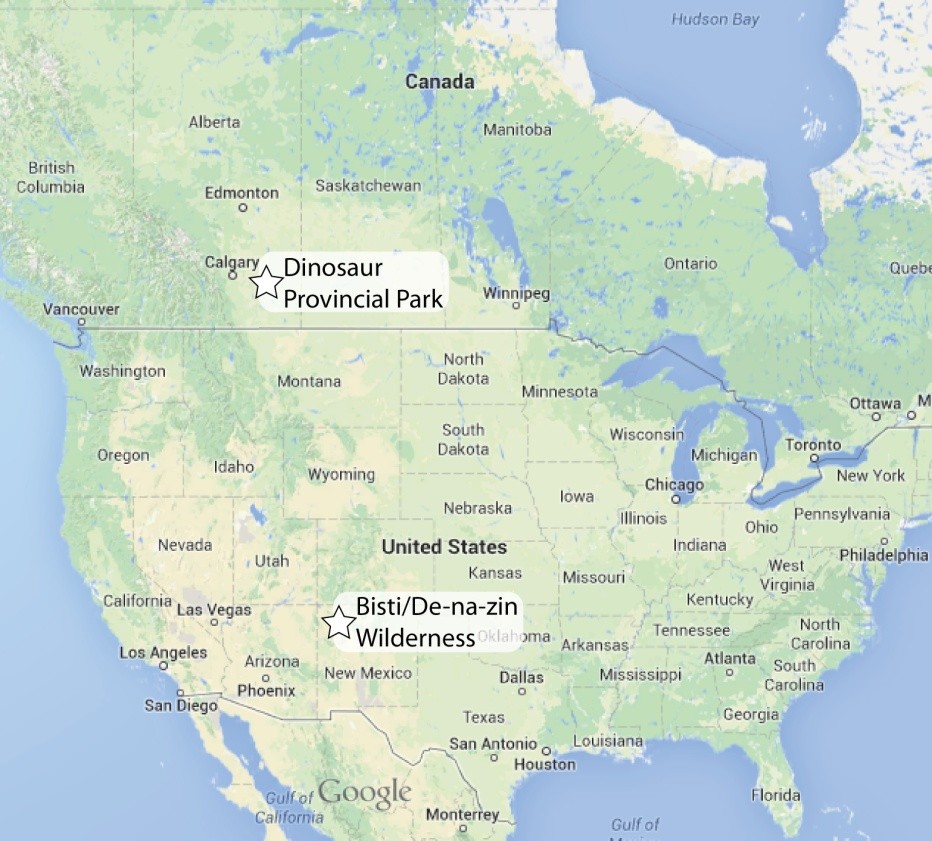 Ziapelta was found in the Bisti:De-na-zin Wilderness in New Mexico, but has close relatives in Alberta's Dinosaur Provincial Park.

“The horns on the back of the skull are thick and curve downwards, and the snout has a mixture of flat and bumpy scales—an unusual feature for an ankylosaurid,” notes Arbour. “There's also a distinctive large triangular scale on the snout, where many other ankylosaurids have a hexagonal scale.”

Ziapelta hails from the late Cretaceous, when a vast inland sea divided North America in two, and Alberta and New Mexico each boasted beachfront property. Ankylosaur fossils are common in several of the rocky formations of southern Alberta, but none have yet been found in the lower part of an area called the Horseshoe Canyon Formation—a gap in Alberta’s ankylosaur fossil record.

“The rocks in New Mexico fill in this gap in time, and that's where Ziapelta occurs,” says Arbour. “Could Ziapelta have lived in Alberta, in the gap where we haven't found any ankylosaur fossils yet? It's possible, but in recent years there has also been increasing evidence that the dinosaurs from the southern part of North America—New Mexico, Texas and Utah, for example—are distinct from their northern neighbours in Alberta.”

Arbour says Ziapelta may have belonged to this group of southern dinosaurs—but more fossils could be waiting to be unearthed in Alberta’s Badlands.

"We should be on the lookout for Ziapelta fossils in the Horseshoe Canyon Formation in the future."

New dinosaur from New Mexico has relatives in Alberta
Newsroom