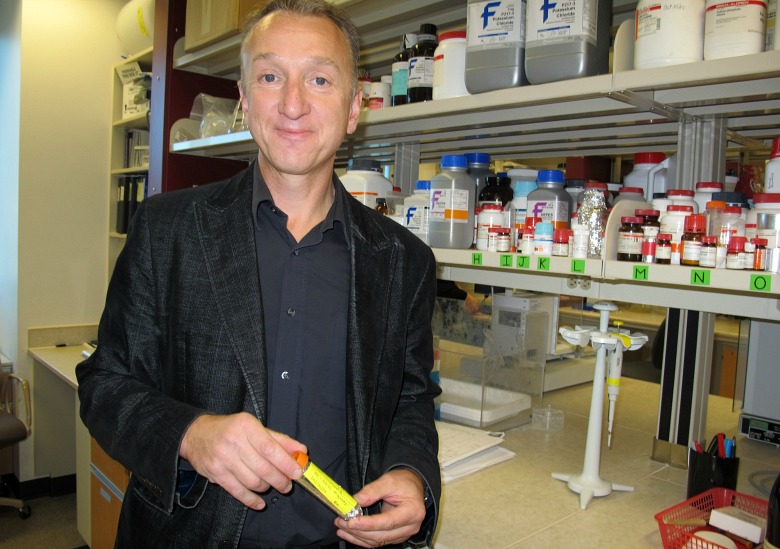 (Edmonton) An international research team led by medical scientists at the University of Alberta has shown that new medications based on resveratrol—a compound found in red wine and nuts—may be used to treat a common heart-rhythm problem known as atrial fibrillation.

Peter Light, a researcher in the Faculty of Medicine & Dentistry, and his colleagues recently published their findings in the peer-reviewed British Journal of Pharmacology. They discovered that new resveratrol-based drugs they created, which were used in the lab, helped regulate electrical activity in the heart by inhibiting irregular electrical currents and by reducing the length of abnormal heart-rhythm episodes. The new medications they created targeted multiple activities in the cell, whereas current medications for heart rhythm problems target just one or two specific areas.

The U of A team is now working on advancing their drug design with colleagues at the Centre for Drug Research and Development, and via TEC Edmonton. Light expects that clinical trials with the advanced drug design will start within the next three to five years.

“We are at the next stage of developing a new oral medication for atrial fibrillation that patients could take on a daily basis to prevent this condition from occurring,” says Light. “We are improving the medication’s solubility and absorption, how it is metabolized and how long it stays in the bloodstream.”

Few medications are currently on the market to help treat atrial fibrillation effectively and those medications may have many serious side-effects. Because resveratrol is a natural substance, Light and his colleagues hope the new drug would be better tolerated by the body.

It has long been known that resveratrol has cardio-protective effects and seems to prevent some rhythm disorders of the heart, lowers blood pressure and reduces enlargement of the heart.

“We have had a tremendous amount of success with resveratrol and have been at the leading edge of resveratrol research as it relates to cardiovascular disease, so the transition to making new and improved medications based on resveratrol derivatives is a logical next step,” says Jason Dyck, one of the researchers on the team.

Light is director of the Alberta Diabetes Institute at the University of Alberta, the Charles A. Allard Chair in Diabetes Research, a professor of pharmacology and a member of the Mazankowski Alberta Heart Institute.

His U of A colleagues included Dyck from the Department of Pediatrics, Dennis Hall in the Department of Chemistry and Shaohua Wang from the Division of Cardiac Surgery. A number of researchers from Hungary also took part in the study, as well as scientists from Manitoba.

This research was funded by the Canadian Institutes of Health Research and TEC Edmonton, with additional support from the Centre for Drug Research and Development through its in-kind contributions and innovation funds.