The carbohydrates on the cell surface determine how it interacts with other cells, which makes them important in cancer and other diseases. So, if we can design compounds that change these structures, we can affect those interactions.

Christopher Cairo, U of A
„ 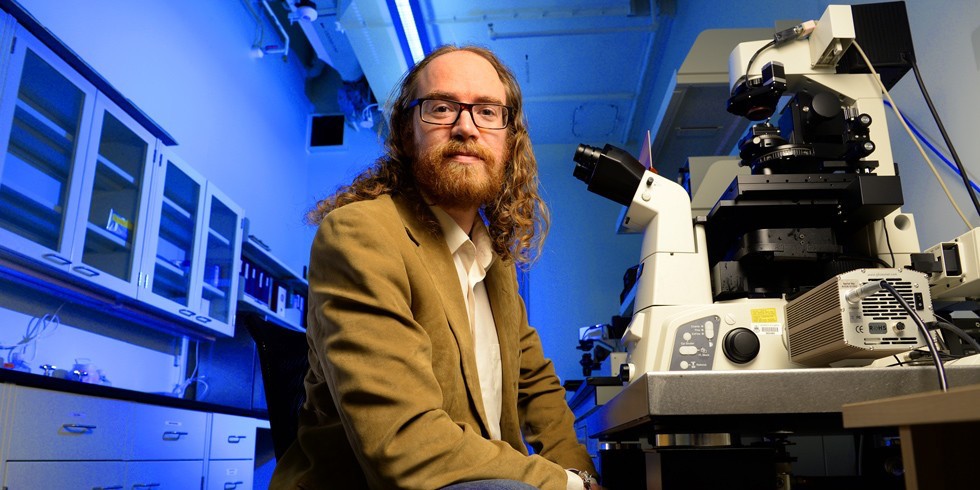 Chemistry professor Christopher Cairo and his team synthesized a compound that inhibits an enzyme linked to brain cancer—a finding that could lead to new drugs that are better able to target cancer. (Photo: Richard Siemens)

(Edmonton) Thanks to important discoveries in basic and clinical research and technological advances, the fight against cancer has mobilized into a complex offensive spanning multiple fronts.

Work happening in a University of Alberta chemistry lab could help find new and more selective therapies for cancer. Researchers have developed a compound that targets a specific enzyme overexpressed in certain cancers—and they have tested its activity in cells from brain tumours.

Chemistry professor Christopher Cairo and his team synthesized a first-of-its-kind inhibitor that prevents the activity of an enzyme called neuraminidase. Although flu viruses use enzymes with the same mechanism as part of the process of infection, human cells use their own forms of the enzyme in many biological processes.

Cairo's group collaborated with a group in Milan, Italy, that has shown that neuraminidases are found in excess amounts in glioblastoma cells, a form of brain cancer.

In a new study, a team from the University of Milan tested Cairo’s enzyme inhibitor and found that it turned glioblastoma cancer stem cells—found within a tumour and believed to drive cancer growth—into normal cells. The compound also caused the cells to stop growing, suggesting that this mechanism could be important for therapeutics. Results of their efforts were published Aug. 22 in the Nature journal Cell Death & Disease.

Cairo said these findings establish that an inhibitor of this enzyme could work therapeutically and should open the door for future research.

“This is the first proof-of-concept showing a selective neuraminidase inhibitor can have a real effect in human cancer cells,” he said. “It isn’t a drug yet, but it establishes a new target that we think can be used for creating new, more selective drugs.”

Long road from proof of concept to drug

Proving the compound can successfully inhibit the neuraminidase enzyme in cancer cells is just the first step in determining its potential as a therapy.

In its current form, the compound could not be used as a drug, Cairo explained, largely because it wasn't designed to breach the blood-brain barrier making it difficult to reach the target cells. The team in Milan had to use the compound in very high concentrations, he added.

The research advances our understanding of how important carbohydrates are to the function of cells. Although most of us think of glucose (blood sugar) as the only important sugar in biology, there is an entire area of research known as glycobiology that seeks to understand the function of complex carbohydrate structures in cells. Carbohydrate structures cover the surface of cells, and affect how cells interact with each other and with pathogens.

Scientists have known for decades that the carbohydrates found on cancer cells are very different from those on normal cells. For example, many cancers have different amounts of specific residues like sialic acid, or may have different arrangements of the same residues.

“The carbohydrates on the cell surface determine how it interacts with other cells, which makes them important in cancer and other diseases. So, if we can design compounds that change these structures in a defined way, we can affect those interactions,” Cairo explained. “Finding new enzyme targets is essential to that process, and our work shows that we can selectively target this neuraminidase enzyme.”

Although there has been a lot of work on targeting viral neuraminidase enzymes, Cairo’s team has found inhibitors of the human enzymes. "The challenge in human cells is that there are four different isoenzymes. While we might want to target one for its role in cancer, hitting the wrong one could have harmful side-effects," he said.

The U of A team reached out to their colleagues in Milan who were studying the role of a specific neuraminidase isoenzyme in cancer cells isolated from patients. Cairo approached them about testing a compound his team identified last year, which was selective for the same isoenzyme.

“I expected it would do something, but I didn’t know it would be that striking. It came out beautifully,” Cairo said.

The U of A team is already working on improving the compound, and developing and testing new and existing inhibitors using a panel of in vitro assays they developed.

“We’ve been working on these enzymes for about five years. Validation of our strategy­­­—design of a selective neuraminidase inhibitor and application in a cell that overexpresses that enzyme—is an achievement for us.”

The U of A’s team was funded by the Alberta Glycomics Centre, the Cancer Research Society and the Natural Sciences and Engineering Research Council of Canada.