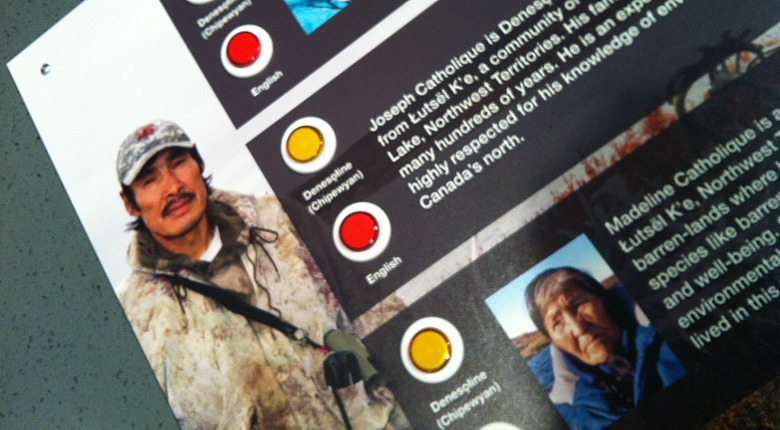 130909-elders-exhibit-banner
The Elders as Scientists exhibit features reflections by three Chipewyan elders from the Northwest Territories.

(Edmonton) The traditional knowledge of Aboriginal elders is being honoured in a permanent exhibit created by University of Alberta researcher Brenda Parlee, at Edmonton’s Telus World of Science.

Elders as Scientists, an exhibit featuring the reflections of three Chipewyan elders from the Northwest Territories, brings a seldom-heard perspective to issues of climate change, said Parlee, a Canada Research Chair based in the Faculty of Native Studies and the Faculty of Agricultural, Life and Environmental Sciences.

The exhibit was created in collaboration with the U of A’s Canadian Circumpolar Institute, U of A graduate student Kelsey Dokis-Jansen and First Nations partners.

“Some of the oldest knowledge systems in Canada can be found here in Alberta and in the Northwest Territories,” Parlee noted. “Elders from First Nations, Inuit and Métis communities have cultural memories that can date back thousands of years.”

The Telus World of Science exhibit draws on photos and audio recordings of the elders taken during a traditional knowledge and science camp held in the barren lands of the Northwest Territories in the fall of 2012. Dokis-Jansen, who is taking an MSc degree in risk and community resilience through the Faculty of ALES, helped co-ordinate the camp and gathered the exhibit material, and found it “a very fulfilling experience.”

“As a young Ojibway woman studying natural sciences, I’ve seen the divide that can be made between Aboriginal and scientific knowledge, and exhibits like this one can show a wider audience that scientists often come to the same conclusions as Aboriginal elders and knowledge-holders through similar processes of observation and verification.”

Located in the science centre’s Environment Gallery, Elders as Scientists taps into an overarching theme of environmental change and helps address the question of how elders make sense of environmental shifts happening around them.

“This is one of the only exhibits in Canada that positions First Nations elders as scientists,” Parlee said. “Aboriginal people are represented in museums, but those exhibits don’t necessarily speak to the value of Aboriginal knowledge in understanding environmental change. By taking in the exhibit, visitors have a chance to see into the past and see a part of Canada that is uniquely different from the urban experience of Edmonton.”

Parlee collaborated with colleagues from Łutsël K’e Dene First Nation, where she has worked for more than 15 years. The community of 400 people located on Great Slave Lake is one of many in Northern Canada facing “unprecedented increases in the level of mining activity,” she noted.

In the last decade, the community has witnessed changes in the health distribution and population of caribou—a species traditionally entwined with Dene culture. The audio portion of the exhibit, in both English and Chipewyan, gives a glimpse into the knowledge held about those changing caribou populations and the culture and world view of Northern communities. One of the people featured in the exhibit, Joseph Catholique, expresses the community’s concerns about the toll of mining and its impact on caribou.

“There is little in the way of scientific records about caribou patterns prior to the 1990s, when mining started in the region,” Parlee said. “The population has declined since then, and although there are other factors involved, local communities attribute many changes to this development.”

Elders as Scientists captures a vital perspective as today’s scientists grapple with ways of dealing with resource development and climate change in Canada’s North, she added. “Learning from both science and traditional knowledge is critical as the North faces increasing development pressures.”

By gathering and using the knowledge of elders—people who have used the landscape for generations—“the scientific community has a real opportunity to get a picture of climate change before the 1950s and 1960s. We need that longer historical record to understand and anticipate the dynamics of Northern ecosystems,” Parlee said.

The exhibit pays homage to and shares the deeply rooted innate wisdom of elders, she added.

“There’s not a lot of respect or understanding within Canadian society of the lived experience or knowledge of Aboriginal people. My hope is that by having the photos and voices in Telus World of Science, with children coming in, we will be able to influence how the next generation perceives First Nations peoples and their contributions to science.”