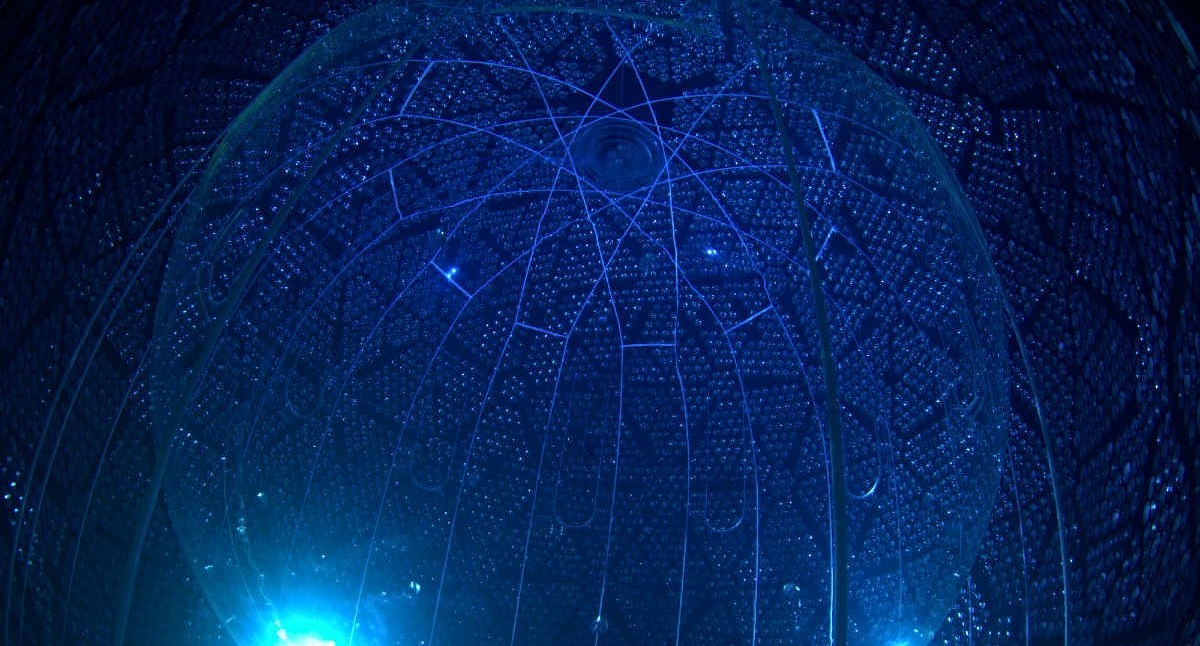 An image from inside the acrylic sphere that houses the SNO+ detector, taken with an underwater camera system developed at the U of A. The ultra-precise equipment is being used to detect and measure neutrinos. (Photo: SNOLAB)

Two new experiments at one of the world’s most advanced particle detectors have confirmed previous research that won the Nobel Prize in physics four years ago, while also testing whether another recent theory may need refining.

Using a neutrino detector called SNO+ floating in a subterranean cavern at the SNOLAB facility in Sudbury, Ont., an international team of scientists, including some from the University of Alberta, verified previous measurements showing the elusive high-energy particles have mass. But they were unable to find evidence of a phenomenon known as nucleon decay, the breakdown of protons and neutrons into lighter subatomic particles, predicted by a recent theory.

“We’re trying to work out what makes neutrinos tick. They have mass, but we don’t know how that mass works,” explained Carsten Krauss, director of the U of A’s Centre for Particle Physics. “SNO+ is designed to figure out if neutrino masses can be measured directly.”

Neutrinos, subatomic particles closely related to electrons, can travel unimpeded for billions of light-years before reaching Earth. The SNO+ detector is located deep underground and houses precise instruments shielded from background radiation—a design that helps reduce interference so scientists can pick up neutrinos as they streak through the detector.

“SNO+ consists of an acrylic sphere floating in a cavern that is filled with water,” explained Aksel Hallin, Canada Research Chair in Astroparticle Physics, who is working on the project with Krauss and fellow U of A physicist Juan Pablo Yáñez. “At the U of A, we were in charge of finding a way to hold the vessel down, which required detailed engineering to create a rope net of ultra-pure material. We also developed an underwater system to monitor the vessel and worked on devices to calibrate it.”

Hallin noted the sphere can be filled with different materials, allowing the team to detect neutrinos of different energy levels.

“The sphere currently contains 900,000 kilograms of water. The next step is to fill it with a material called liquid scintillator—a chemical that converts energy from radiation into flashes of light,” said Hallin.

“The primary challenge we face is preparing a suitable scintillator that will be stable for the duration of the experiment,” said chemistry professor Jonathan Veinot, who is collaborating on the project along with post-doctoral researcher Munish Sharma. “This involves numerous considerations including compatibility with the underground SNO+ facility, understanding the chemistry of the material, preparing candidate scintillators on a lab scale, testing material stability and response, and ultimately implementation in the detector.

“This is a very large undertaking with the potential for huge returns.”

With water filling the chamber, the team was able to replicate measurements from a previous series of tests that proved neutrinos have mass. Those original measurements were recognized with the 2015 Nobel Prize in physics. The new results also showed that SNO+ is ready for the next phase: using the scintillator to hunt for even more elusive lower-energy neutrinos.

In a separate series of SNO+ experiments, the researchers conducted the most sensitive search yet for certain types of nucleon decay. Though they didn’t detect it, they did prove that if the phenomenon exists, it is even rarer than originally thought, and established limits on just how infrequent the phenomenon is.

“There aren’t many things in the world of particles that we can’t yet properly describe. The standard model of particle physics is very predictive and extremely successful. The masses of neutrinos are not described within this framework,” said Krauss.

“That’s what makes neutrinos so exciting: we learn something new every time we look at a new aspect of how they work.”

The studies, “Measurement of the 8B Solar Neutrino Flux in SNO+ With Very Low Backgrounds” and “Search for Invisible Modes of Nucleon Decay in Water With the SNO+ Detector,” were published in Physical Review D.