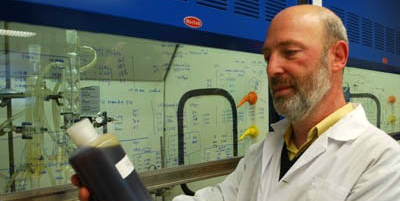 Jonathan Curtis is one of five researchers receiving funding from CCEMC for projects to reduce greenhouse gas emissions. In his case, the funding is going to Sprayfoam Co., a spinoff company that is commercializing spray-foam insulation that uses an organic bio-polyol that Curtis and his team formulated.

(Edmonton) Four University of Alberta researchers and one company developing another U of A researcher’s product have received the lion’s share of funding from an agency supporting projects that address greenhouse gas (GHG) emissions.

The five projects were awarded almost $1.4 million from the Climate Change and Emissions Management Corporation out of its total funding of $1.6 million for seven projects.

Four of the recipients are based in the U of A’s Faculty of Agricultural, Life and Environmental Sciences: Edward Bork, the Mattheis Chair in Rangeland Ecology and Management and director of the Rangeland Research Institute; John Basarab, a senior beef research scientist at Livestock Gentec and an adjunct professor in AFNS; Guillermo Hernandez Ramirez, a soil scientist in RenR; and Sprayfoam Co., which uses bio-based components developed by Jonathan Curtis, the scientific director of the Lipid Chemistry Group.

Bork’s project will test whether beef cattle production efficiencies are associated with cow and calf performance under open-range grazing production systems. Specifically, the project will provide information on how current genetic improvement programs may affect cow and calf production as well as the associated profitability and GHG emission reductions as a result. Reducing cow herd GHG is crucial to improving the environmental footprint of beef production. This study received $168,000 from CCEMC.

Basarab is studying methane emissions from beef cattle bred for lower residual feed intake than the average animal. Methane is a potent GHG that results from the natural digestive process in the animal stomach. This project will use cutting-edge gas sensor technology to measure beef cattle in real production settings. Other goals are to determine the reliability of less costly methods to identify low-methane-emitting animals, and to examine the use of feeding, drinking and other parameters in relationship to methane production and yield. This project received $851,354.

Ramirez’s project is focused on identifying and developing best management practices for manure injection into soils, and on the use of nitrification inhibitors to reduce nitrous oxide emissions from crop fields. Its long-term objective is to reduce N2O emissions from agricultural landscapes where manure is applied. In Alberta, an estimated eight million tonnes of GHGs come from N2O emissions annually. The CCEMC contributed $75,000 to this project.

Sprayfoam Co. of Edmonton is developing, testing and pre-commercializing a spray-foam insulation that uses an organic bio-polyol formulation. The goal is to use the bio-based substance to replace 50 per cent of the commercial petrochemical polyol formulation used in polyurethane spray foam. The bio-based polyol is derived from canola and other plant oils developed by Curtis and his team. This project was awarded $200,000.

Amit Kumar, a professor of mechanical engineering and holder of two industrial research chairs at the U of A, is looking at the cost-effectiveness of using an algae-based biomass grown in Alberta to produce diluent and hydrogen. Alberta’s oilsands industry uses diluent to make bitumen easier to transport in pipelines. Most diluents—typically hydrocarbons such as naphtha or condensate—are imported from U.S. refineries. Kumar is assessing whether the renewable algae-based alternative could reduce both the costs and GHG emissions associated with diluent production, which could in turn help make the industry more environmentally sustainable. The project received $86,250 from CCEMC.

The Climate Change and Emissions Management Corporation is an Alberta-based not-for-profit corporation with a mandate to reduce GHG emissions and to help the province adapt to climate change. Its funding comes from Alberta’s largest industrial emitters, who have a legislated requirement to achieve target reductions of GHGs.