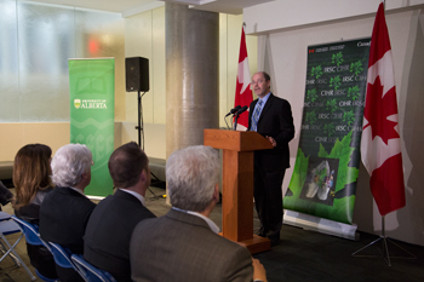 Cam Wild speaks at the CRISM funding announcement May 1. 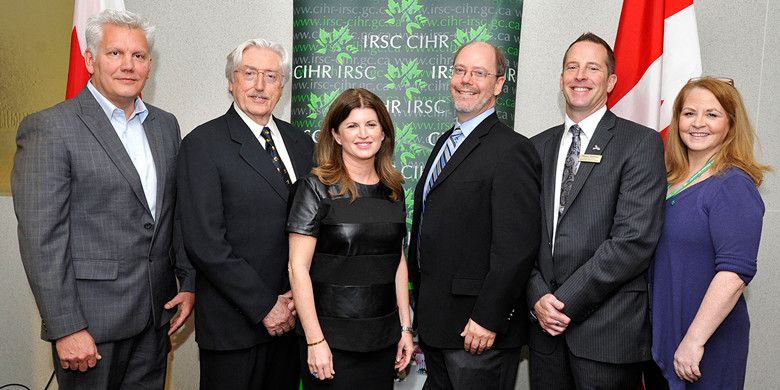 (Edmonton) Substance misuse and addiction is a complex health and social issue that affects as many as 21 per cent of Canadians. It transcends social, economic and geographic borders. And though there are many interventions and treatment strategies known to have positive results, few have been widely implemented across the country.

That will change with the announcement of the Canadian Research Initiative in Substance Misuse (CRISM).

On May 1, Health Minister Rona Ambrose and the Canadian Institutes of Health Research (CIHR) announced $7.2 million in funding for CRISM. An additional $5 million is specifically allocated to research on prescription drug abuse. The project is the first of its kind in Canada and has been created in response to growing concerns about the impact of substance misuse.

Funding from CIHR will be used to establish four CRISM nodes in a new national network, divided into the Prairies, British Columbia, Ontario and Quebec/Maritimes. Together, these teams will work to translate and implement new evidence-based approaches to prevent and treat substance misuse, and reduce related health effects, including addiction, overdose and death.

“Our government is committed to investing in innovative research initiatives such as CRISM, which will address the needs of Canadians living with drug addiction, and those at risk of addiction. We congratulate the four research teams that will work together to provide effective and tailored interventions and therapeutic approaches,” said Ambrose.

The Prairie CRISM node includes the University of Alberta, University of Calgary and University of Saskatchewan, and involves partnerships with more than 50 researchers, service providers, consumer advocates and policy-makers from across Alberta, Saskatchewan and Manitoba. U of A professor Cam Wild is the nominated principal investigator for the Prairie node.

A professor in the School of Public Health and expert in addiction and mental health, Wild is enthusiastic about CRISM’s potential. “Addictions don’t always come to mind when people think about health and health care. CRISM is building a network to promote regional and national collaboration on this important but often overlooked health issue.”

“There is no precedent for regional collaboration on substance misuse across the Prairies, so our goals are quite simple,” said Wild. “We want to create trusting working relationships among CRISM affiliates and develop accessible resources for substance misuse interventions that are of value to service providers, policy-makers and consumer advocates alike.”

“Intervention for substance misuse is a pressing and complex health issue that requires a strong collaboration between researchers, service providers and representatives of people living with substance misuse,” says Anthony Phillips, scientific director with CIHR’s Institute of Neurosciences, Mental Health and Addiction.

“We are confident that the initiative announced today will lead to new evidence-based approaches that will generate better health outcomes and be implemented across the country in a more personalized manner.’’