Joint UAlberta-UCalgary program aims to produce scientists who can lead advances in information and communications technology. 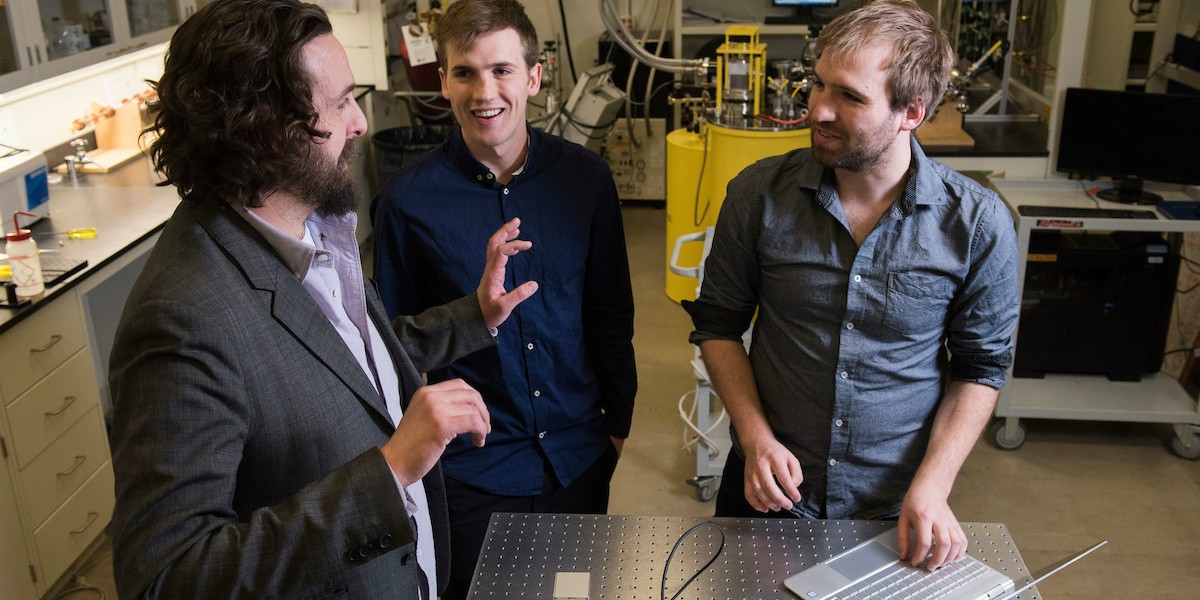 A new graduate program at the universities of Alberta and Calgary is focused on producing scientists who will revolutionize the information and communications sector through quantum technologies.

“Quantum technology is a field on a precipice,” said John P. Davis, a U of A physics professor and program lead of the Quantum Nanotechnology Training program in Alberta (QUANTA).

“In the next five to 10 years, we expect that quantum will disrupt many existing technologies. It remains to be seen which ‘Quantum Age’ technologies will dominate, but one thing is certain: society will need highly trained physicists and engineers capable of leading these advances, both in academic and industrial settings.”

The motivation behind the new program is to tilt graduate training on its axis, creating graduates ready for business and industry instead of the traditional route of academia.

“We’re trying to fill this gap in graduate training, because more and more, students are entering the technology industry or becoming entrepreneurs. We need to train them how to survive and thrive in that world.”

The new program is designed to foster innovation, management and entrepreneurship skills, preparing graduates to found and advance quantum technology companies, solidifying Canada’s central role in leading the Quantum Age, said Davis. It will include features like professional skills and business planning development, internships with industry partners and seed money to support students turning their business ideas into reality.

“We are coming into the second quantum era. Where we first had these fundamentals of quantum physics 100 years ago, we are now at the point where we understand quantum physics and are developing quantum technology to take to the marketplace.”

Davis said Canada is well positioned to be a big industrial driver of this second coming of quantum, noting the success of companies such as D-Wave Systems, a maker of quantum computers, and the U of A-based nanoFAB, one of the world’s leading nanofabrication facilities.

“Canada is in a really strong place, but we have to continue to act to sustain and push that position further. The ingredients are all there to support a real revolution in quantum technology in Canada. We have a society that is open to new technology, and we have funding agencies who are interested in pushing forward not just in science but also technology, innovation and entrepreneurship.”

In addition to developing industry-ready grads, another focus of the program is diversity.

“By encouraging and supporting diversity in QUANTA students, we’re contributing to diversity in the quantum industry as a whole,” said Davis. “That means incorporating best practices in our program to recruit the best and brightest students—of all backgrounds,” said Davis.

Quanta involves a collaboration between six principal investigators, including Davis and Lindsay LeBlanc from the U of A’s Department of Physics, Ray DeCorby from the U of A’s Faculty of Engineering, and Paul Barclay, Christoph Simon and Wolfgang Tittel from the University of Calgary.

The research goals of the collaboration, which is supported by NSERC through its CREATE program, are focused long-term on establishing a coast-to-coast quantum network for Canadian governments, businesses, academia, the health industry and individual citizens.

It received funding earlier this fall from the Canada Foundation for Innovation to focus on the development of quantum networks, which allow transmitting quantum information over thousands of kilometres, enabling secure communication and unprecedented computational performance.