"Doug Wilson has been very influential in advancing public health inside and outside the university," says Kue Young, dean of the School of Public Health. "We have all benefited from his wisdom and leadership." 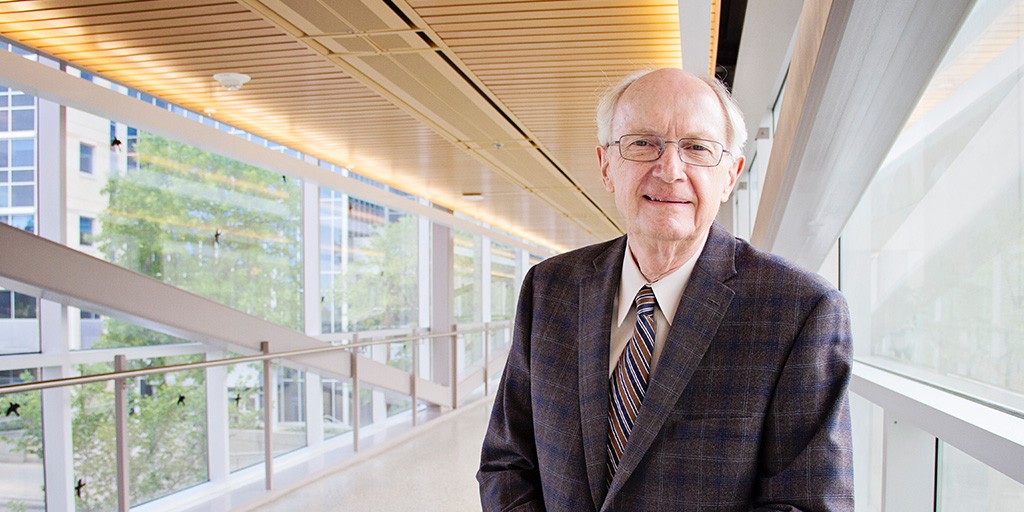 “Doug Wilson is an outstanding champion of public health, so it is our pleasure to name this new lecture series in his honour,” says Kue Young, dean of the School of Public Health.

“He has been very influential in advancing public health inside and outside the university,” he adds. “We have all benefited from his wisdom and leadership.”

Wilson’s interest in public health stems from experiences early in his career as a physician.

“While working as a kidney specialist in Toronto during the 1970s, I was struck by the number of patients needing ‘rescue therapies,’ such as dialysis and transplantation,” says Wilson, who trained as a medical doctor at the University of Toronto.

Over the years, it became clear to him that the number of people needing these rescue therapies was increasing at a rate of 10 per cent annually. Many were also suffering from diabetes.

“I found myself asking why this was happening and how we might prevent the burden and suffering associated with chronic conditions such as kidney disease,” explains Wilson. “I felt that we needed to address these health issues ‘upstream’ with proper policies and programs,” adding, “The health system needed to direct more resources to promoting health and preventing illness.”

This interest in population health, health promotion and public health soon became a passion for Wilson. In 1984, he brought this perspective with him when he joined the University of Alberta as dean of the Faculty of Medicine (as it was known at the time).

During his decade-long tenure as dean, Wilson worked closely with deans in other University of Alberta health science faculties. These working relationships, and his public health perspective and expertise positioned him to play a central role in numerous initiatives. These initiatives ultimately advanced the University’s focused attention and leadership in public health on a national scale.

For example, as dean, Wilson initiated and chaired a committee of health sciences deans which developed into the Coordinating Council of Health Sciences. This Council was tasked with identifying positive ways to create momentum and program development during a period of university budgetary constraints.

Wilson explains, “No such independent degrees existed in Canada at the time. But, courses which provided the key elements of the proposed program in health promotion were available in various University of Alberta faculties.”

“We knew there was demand for the program, especially in light of regionalization of the health system in Alberta,” he adds.

The result was the creation of the Centre for Health Promotion Studies. Graduate programs were launched in 1996 after approval by the University’s Board of Governors and the Alberta Government.

After Canada entered the 21st century, several key political and social factors led to increased attention on public health. “The context in Canada was changing dramatically and there was increased national support for public health research,” explains Wilson, pointing to the creation of the Canadian Institutes of Health Research in 2000.

In addition, Wilson points to events such as the Walkerton E. coli outbreak (2000) and the SARS epidemic (2002) that triggered federal action in Canada to plan for a well-prepared public health response to future crises.

It was in this context that, once again, the University of Alberta showed visionary leadership when Carl Amhrein, then provost, struck a task force to develop a faculty of public health.

Wilson chaired the task force which made two key recommendations. The new faculty could only have the desired impact if it was a separate, distinct faculty. And, it should be supported to reach the standards necessary to be accredited.

On March 17, 2006, the Board of Governors of the University of Alberta approved the faculty.

As senior advisor to the dean of the new faculty, Wilson provided leadership to complex initiatives. They included developing Faculty Evaluation Committee guidelines and contributing to accreditation documents required by the Council on Education for Public Health.

Today, he continues to have keen interest in the work of the School, collaborating with colleagues on research initiatives, participating in meetings, and attending academic and social events.

“I believed in the School when it began, and I’ve been excited by its evolution,” he says. “If a faculty is serving an important purpose, it should be here for posterity.”

“I want to do whatever I can to continue to support and strengthen the faculty. If I can do that by showing that a professor emeritus is still a great believer, then I’m happy to do so.”