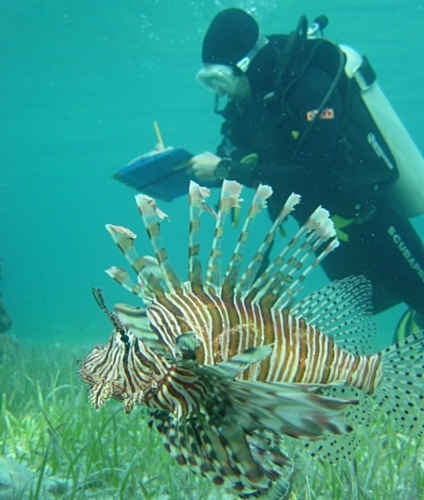 U of A marine biologist Stephanie Green records observations about a lionfish. Green's research yielded a systematic way of analyzing behavioural traits that could improve understanding of how marine predators select their prey. (Photo courtesy of Stephanie Green)

Marine biologists hope their model can help other scientists and conservationists better understand how predators select their prey. 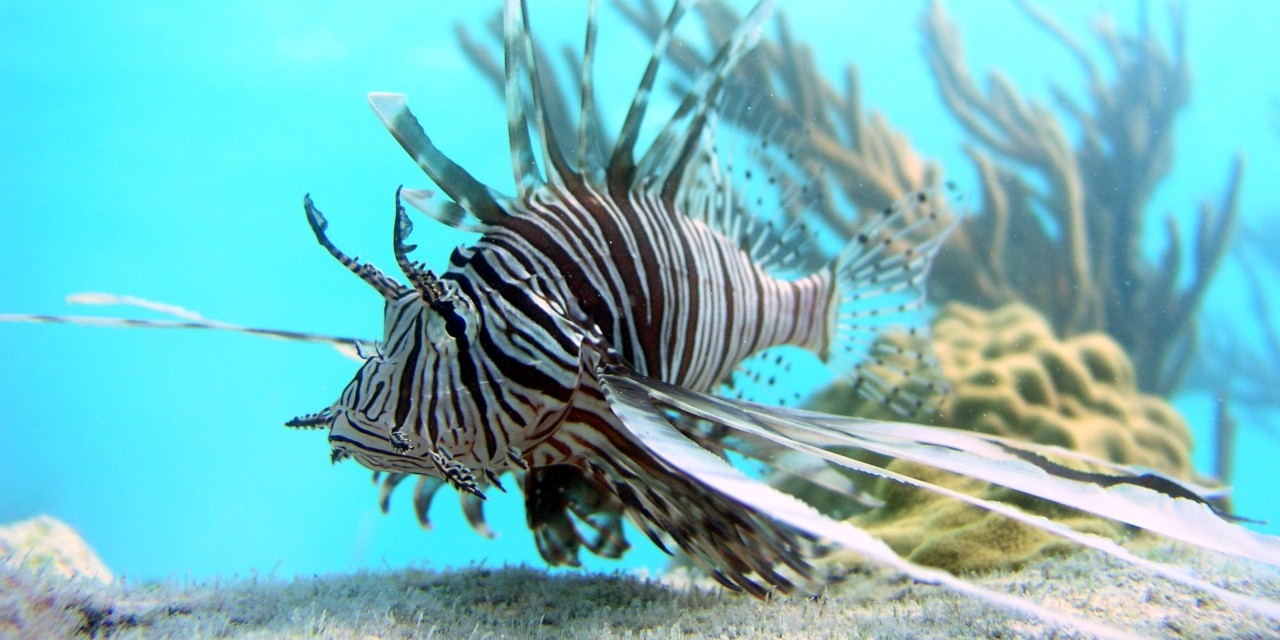 The invasive lionfish's lethal combination of stalking behaviour, powerful mouth suction and forward momentum as it strikes have wreaked havoc on native fish species on reefs in the Atlantic Ocean and Caribbean Sea, according to a new study. (Photo: Mark Albins, Oregon State University)

A new model is providing insight into the impact of a venomous predatory fish that has invaded more than 7.3 million square kilometres in the Atlantic Ocean and Caribbean Sea, wreaking havoc among native fish populations.

Scientists have speculated that the invasive lionfish are so successful in the Atlantic because prey don’t recognize them as a predator, but that may not be the case, according to University of Alberta marine biologist Stephanie Green, who led a study on the lionfish.

“We found that reef fish enter the ‘danger zone’—close enough to be eaten—around invasive lionfish at similar rates to native predators. But for those prey that stray too close to lionfish, they are up to twice as likely to be captured than by predators that are naturally found on Caribbean reefs,” said Green.

The researchers suggest the lionfish’s success as a hunter is likely due to a combination of its particular stalking pattern, mouth suction and forward momentum as it strikes—characteristics that are unlike native fish predators.

The ranges of many predators are expected to grow due to climate change and future invasions. The new model—a systematic way of looking at behavioural traits—is designed to help scientists and conservationists better understand how predators select their prey.

In the case of lionfish, the scientists hope the model can help them identify areas where native species are most vulnerable to the novel stalking hunting strategy of lionfish as the invasion spreads.

“As invasions take hold, scientists have few tools to help them predict what the effects will be, and as a result, we often don’t understand how invasive predators have changed environments until it is too late,” added Mark Hixon, a professor at the University of Hawai'i and co-author of the study.

Hixon and Green hope their approach can be used by researchers in the Mediterranean who are keen to understand how fish in that sea will be most affected by the recent invasion of lionfish.

Green is also adapting the model to examine predator-prey interactions for albacore tuna with respect to climate change.

“We hope that using knowledge of species behaviours can help scientists and managers predict who will eat whom when predators and prey encounter one another in new settings,” she said.

The study, “Trait-Mediated Foraging Drives Patterns of Selective Predation by Native and Invasive Coral-Reef Fishes,” is published in Ecosphere.