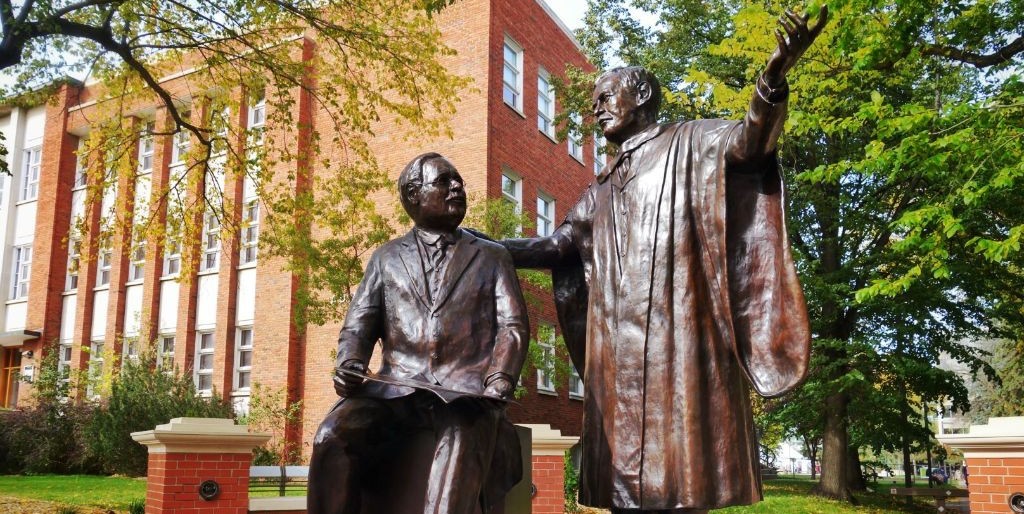 'The Visionaries,' a monument honouring the University of Alberta's founders, is the centrepiece of the Presidents' Circle on the north campus.

(Edmonton) A new bronze monument honouring the University of Alberta’s founders now welcomes visitors to the university’s north campus. The monument, titled The Visionaries, was created by distinguished U of A alumna and renowned Edmonton artist Barbara Paterson.

“I imagined they had many passionate conversations about the nature of education and a public university,” said Paterson, ’57 BA (SpecCert), ’88 BFA, when describing her approach to the commission. “My hope is that people will come and visit them and get to know these gentlemen, and one day it will be lovely if people will say, ‘Oh, I’ll meet you at The Visionaries.’”

The Visionaries is a gift to the university community from the U of A Alumni Association to mark the association’s 100th anniversary in 2015.

“Tory and Rutherford’s spirited optimism inspired the university’s early grads to form an association so they could contribute more to their university and community as a team,” said Mary Pat Barry, ’04 MA, president of the Alumni Association. “The Visionaries highlights the story of the university’s founding and will continue to inspire us to do great things.”

“Henry Marshall Tory and Alexander Rutherford set a standard for leadership that is really second to none in our country—and this monument is a fitting tribute to their achievements,” said U of A President David Turpin. “They created a vision, set goals and achieved great things. They didn’t just believe that education was the foundation to building their community, province and nation—they made it so through their actions, passionate advocacy, skilful diplomacy and commitment to public service. Because of their forward thinking, they determined the upward trajectory of generations of Albertans and Canadians.”

The Visionaries is approximately three metres tall and stands in the centre of the Presidents’ Circle, a new university landmark at 89 Avenue and 114 Street. Plaques with the names of the university’s past presidents are incorporated into a low wall made of red brick masonry similar to that used in the university’s first buildings.

A gift from U of A alumnus David McLean, ’59 BA, ’62 LLB, ’94 LLD (Honorary), in honour of his wife Brenda McLean, Rutherford’s great-granddaughter, helped make the Presidents’ Circle possible.

“It took a lot of imagination and gumption to start a university in Alberta in 1908. We are thrilled to contribute to a monument honouring the university’s founders and the subsequent presidents who built on their early success,” said David McLean.

The unveiling of The Visionaries and opening of the Presidents’ Circle kicks off 2015 Alumni Weekend, which continues through Sept. 27.