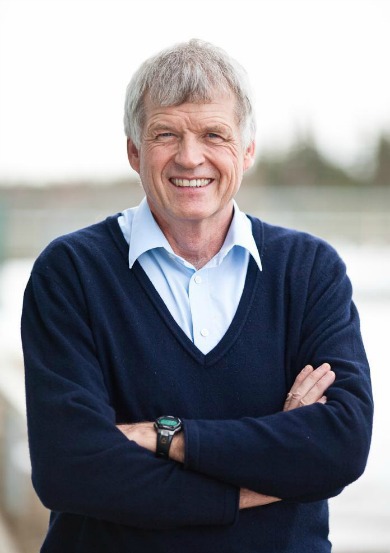 (Edmonton) The renowned University of Alberta paleontologist who helped put the Grande Prairie area on the map as a dinosaur-hunter’s paradise is having a museum named in his honour.

After years of planning, the Philip J. Currie Dinosaur Museum broke ground this summer and is expected to open its doors in the fall of 2014. Set upon a 10-acre lot in Wembley next to Highway 43, the $34.6-million project will provide 41,000 sq. ft. of state-of-the-art, interactive space to explore.

Currie, who has been digging in the area since the early ‘70s, says talk of a facility to exhibit the vast findings really began to pick up when his team began excavating the nearby Pipestone Creek bonebed in 1985.

“It is extremely dense with bones,” said Currie. “I’ve lost track of how many skulls we’ve dug up; it’s 25 at least.”

One of Currie’s best finds, the Pipestone Creek site consisted of specimens of a herd of what was then a novel dinosaur species, Pachyrhinosaur lakustai, wiped out en masse about 72.5 million years ago. Currie explains that the dinosaur is distantly related to triceratops, but instead of horns, Pachyrhinosaur (“thick-nose lizard”) has big bosses of bone on its head—one over its nose and one over each eye—which lend the creature its name.

Currie says Pipestone Creek was just the first of a number of sites his team has since excavated that are teeming with fossils not typically found in the Edmonton, Drumheller or Dinosaur Provincial Park areas.

He adds the Grande Prairie Museum, tourism centre and regional college did their best to exhibit the findings, but were proving to be inadequate.

“Everyone felt these exhibits were not reflective of the quantity and quality of the resources in the area,” said Currie. “I think the idea is that if we can find that much by just going up there and working for a couple of weeks per year, as people become more aware of these resources then more and more material is going to be produced.”

“It's a great honour, of course,” said Currie, adding paleontology is just as much about people as it is about dinosaurs. “It's always nice when you have good people you are working with.

“For me the best part of working at the University of Alberta is being able to work with students—we basically form a team that not only produces scientific papers, but also does the work in the field together and accomplishes things I couldn't ever hope to do by myself.”

Currie points to the burgeoning Dino 101, the U of A’s first massive open online course, set to go live Sept. 4, as an exercise in teamwork.

“We’ve all worked long hours trying to get the MOOC, but everyone is pitching in and it really is a team effort right across the board.”