Entrepreneurship@UAlberta and eHUB designed to foster culture of entrepreneurship and innovation on campus, across multiple disciplines. 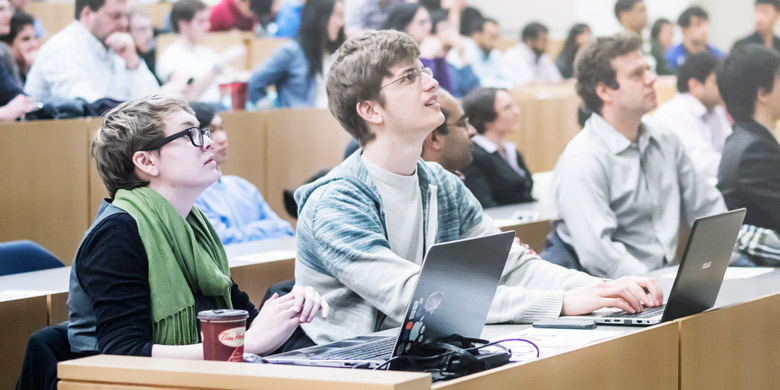 Students from across disciplines came together for the launch of the Entrepreneurship 101 course Jan. 28. (Photo: Nicholas Yee)

(Edmonton) As it is with many University of Alberta students at this time of year, it’s crunch time for Adrianne Thomson. When she isn’t nose-deep in a textbook learning about court life in imperial Japan some 800 years ago, she’s rolling up her sleeves tackling another pressing project: launching a new business.

The third-year East Asian Studies major has her eyes on April for the launch of MiniPrivé, an online shopping website geared toward high-end contemporary kids’ clothing. She hopes the venture proves two things: Canadians, and youth in particular, are underserved for online shopping options; and, when it comes to entrepreneurial thinking, your major doesn’t matter.

“It’s very different to switch off the arts mind and switch on the business mind, but it’s something I have and I feel like other students have, too,” said Thomson, who is launching MiniPrivé with friend Shyloe Feculak and fourth-year science student Jennifer Peters. “If you have an idea, there are huge opportunities at the U of A to gain support and connect with others; there are a lot of other people on campus who are trying to make their ideas a reality. Don’t put yourself in a box.”

On March 7, the U of A launched two new entrepreneurial initiatives, Entrepreneurship@UAlberta and eHUB, to help students like Thomson grow their ideas into thriving business ventures. It’s all part of an effort to “catalyze” an ecosystem and culture of entrepreneurship and innovation on campus—across disciplines, says Michael Lounsbury, who with Anthony Briggs and Qasim Rasi of the Alberta School of Business’s Technology Commercialization Centre, is spearheading the initiative.

“Within Alberta, there is a strong level of support for entrepreneurship and innovation but it can be difficult to access, especially for young people starting out who might not know where to go for help,” added Briggs. “Entrepreneurship@UAlberta leverages what we already do well at the U of A—our teaching and research in entrepreneurship and innovation—and links students to the mentorship, tools and resources they need to take their startup or idea to the next level.”

Briggs co-wrote a recent study showing that U of A alumni collectively founded more than 70,000 organizations globally, a third of which were non-profit, or for-profit social, environmental or cultural organizations. Entrepreneurship@UAlberta is an important continuation of that work, he said. It not only supports entrepreneurial students in established programs like the MBA in innovation and entrepreneurship, but also gives students across campus access to new offerings like the undergraduate elective Entrepreneurship 101, and new post-graduate certificate and post-doctoral programs.

Although Entrepreneurship@UAlberta is driven by the business school, Briggs said it is a true campus-wide effort. It offers partnerships, networking opportunities and mentorship across disciplines and into the business community through organizations like TEC Edmonton, Startup Edmonton, Alberta Innovates Technology Futures, Microsoft Ventures and Capital Ideas.

Entrepreneurship@UAlberta has a physical space to call home in eHUB, located in HUB Mall. eHUB serves as a meeting space for students of all backgrounds to come together and collaborate on ideas, host talks and put on workshops related to entrepreneurship.

Word already spread to computing science PhD student Kit Chen, who co-founded the startup Alieo Games, an online game that helps students in grades 3 to 8 improve their writing. With no prior business experience, Chen and her two partners found even the idea of writing a business plan daunting.

“None of us had started a business before and it really frightened us. We had an idea and we didn’t know if was commercially viable or how far we wanted to take it,” she explained.

Alieo Games entered a local hackathon and business plan competition for startups, where Chen met Rasi, who put her in touch with TEC Edmonton and expertise in legal, accounting, marketing and other mentors, including other gaming companies.

“These people could be and are our competitors, but they’re helping us because they know we’re students and we’re just starting out,” she said. “It’s been really good that way.”

Briggs said the ultimate goal of Entrepreneurship@UAlberta is to give students the tools to become entrepreneurial thinkers and leaders, whether or not their startup idea takes off.