City core north of river offers most livable blend of amenities for millennials, according to research-based ranking. 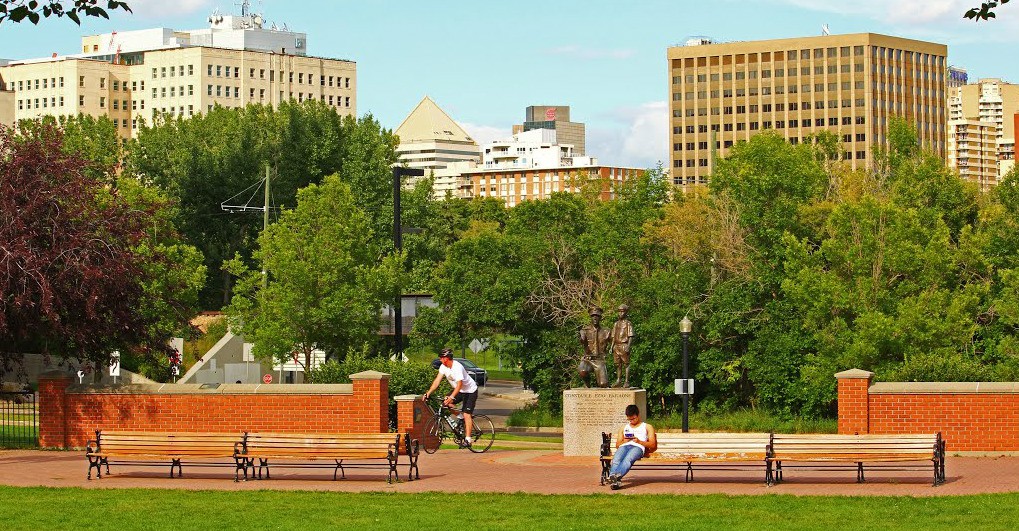 Neighbourhoods in Edmonton's core north of the river valley ranked high in livability based on what millennials value in a community. (Photo: Mapio.net)

As millennials make their way into the world, the promise of a suburban paradise may not offer them the livability they crave, according to a University of Alberta ranking of Edmonton’s top communities.

“Edmonton’s core north of the river is kind of the place to be,” said Janna Bradshaw, a science student who, along with arts undergrad Stephanie Kovach, compiled the ranking based on their research as part of their advanced geographic information systems course where students used geospatial data to look into ways to make Edmonton more livable.

Central McDougall landed in the top spot of their millennial-leaning livable neighbourhood analysis, and was joined in the top 10 by core contemporaries Woodcroft (3), McCauley (5), Spruce Avenue (6) and Bellevue (10).

“We wanted to do our own analysis based on different livability factors,” said Bradshaw.

To complete their suitability analysis, the team came up with five factors that enhance livability based on what millennials value in a community—leisure and culture, natural environment and public open space, food and other local goods, transportation (bike routes and LRT) and education—and two factors that detract from livability: street speeds and collisions, and crime and safety.

Bradshaw said the factors millennials value and the factors other age demographics value tend to be very similar, but millennials put a higher importance on access to active transportation and public transit, as well as increasing density or apartment-style living and open green space.

“Because we needed to hone in on a specific aspect, we chose millennials. Because Edmonton is one of the youngest and fastest-growing cities in Canada, we thought this might be a great opportunity to try to look at what millennials might be interested in.”

A 400- or 800-metre buffer was created around each opportunity or constraint. This buffer distance equates to a five or 10-minute walk, which is suitable for a neighbourhood-scale analysis. From there, points were added every time a livability opportunity appeared, or subtracted when a constraint emerged. For example, if a community had 10 restaurants within an 800-metre radius, they would be assigned a higher value than one with less eateries.

The results were then plotted on a map of Edmonton. What emerged was a picture of livability in Edmonton’s core, led by Central McDougall.

“Located just north of downtown, Central McDougall is a very dense neighbourhood, it’s highly walkable, there is a ton of amenities—grocery stores, restaurants, pubs—and is well connected through the transit system and is relatively affordable,” said Bradshaw.

The team didn’t factor in affordability, because millennials range in age from their early 20s to late 30s and encompass a wide range of income levels.

This determination meant the upscale community of Carter Crest, which has an average assessed home value of $527,387—compared with Central McDougall’s $158,688—was able to finish second in the analysis.

Situated in the southwest of the city, Carter Crest was a bit of a surprise until the research team looked closer at the numbers.

“After looking, we realized it is in our top five because it has extremely low crime, tons of recreation opportunities, access to the river and park space and schools,” said Bradshaw. “For millennials who are young professionals or have a young family, Carter Crest might offer a good opportunity for those looking for a quieter place out of the core.”

While the top seven neighbourhoods were separated from the pack, Bradshaw said any community in the top 50 were highly livable and the next tier of 100 scored very high as well.

She added that for the most part, the lowest-scoring communities were new communities on the city’s perimeter that had underdeveloped amenities, existed in a “food desert” where you had to drive to a grocery store and typically featured a city transit system still in its infancy.

“I think what this analysis showed is that Edmonton has quite a few options for liveable neighbourhoods, each having factors that people might be looking for,” said Bradshaw.

As for how the list compares with Avenue magazine’s, which is the result of an online survey based on personal perception or opinion of their readers, only one community, Oliver, finished in the top 10 in both rankings—third in Avenue’s, seventh in Bradshaw and Kovach’s. Also scoring highly on both ranks was Edmonton’s downtown, which finished eighth in Avenue and 12th in the U of A ranking.

“This is just one analysis, a different take on the top neighbourhoods,” noted Bradshaw. “Both are valuable to look at.”