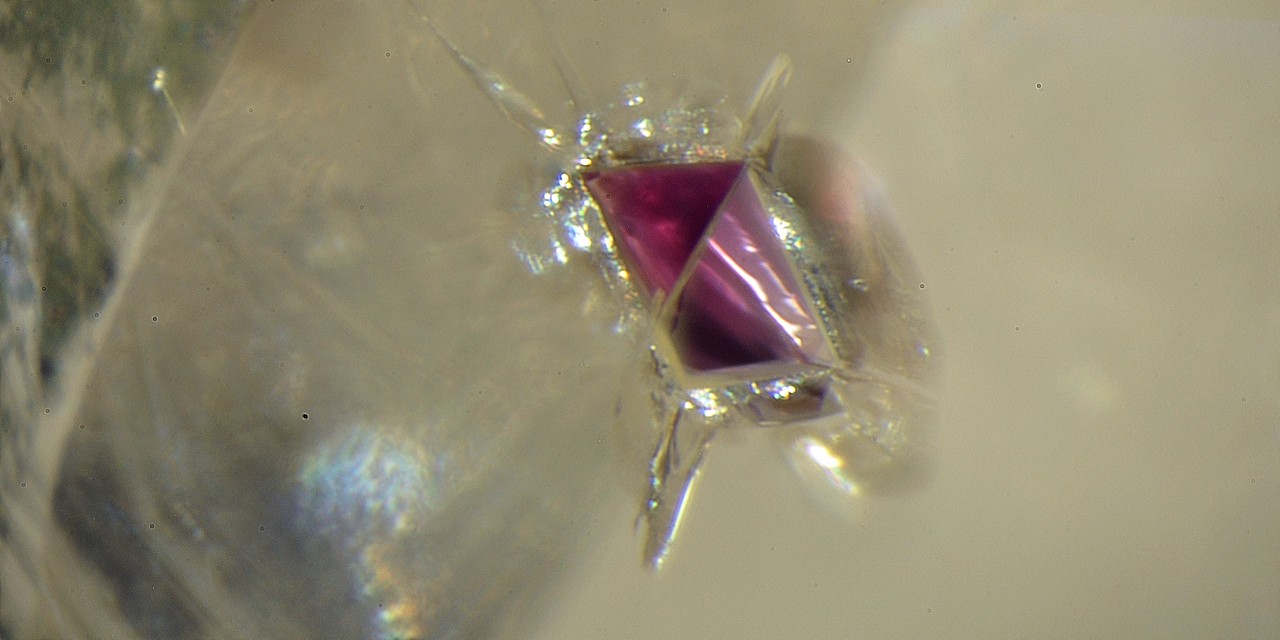 A tiny inclusion of lherzolitic garnet inside a diamond collected from the De Beers Group Victor Mine in Ontario. New research revealed lherzolite is a source rock for diamond formation—a discovery that could eventually help geologists find valuable deposits around the world. (Photo courtesy of Anetta Banas)

A startling discovery has the potential to change diamond exploration in Canada and around the world.

Research by geologists from the University of Alberta and De Beers Group, the world’s largest diamond company, showed that “economic” diamond deposits can come from lherzolitic diamond substrates, a common rock type in Earth’s mantle, which until now had only been peripherally associated with diamond formation.

“The outcome of the project fundamentally changes our understanding of where diamonds come from,” said U of A geologist Thomas Stachel, the Canada Research Chair in Diamonds. “(It) has the potential to cause diamond companies to retool their approach to exploration.”

Diamonds in ancient continental regions, such as the Canadian Shield, were thought to have grown mainly in different types of mantle rocks. The assumption, which has guided exploration for decades, is now being turned on its head.

The research team used samples from the De Beers Group Victor Mine in the James Bay region of northern Ontario. The area, part of the Canadian Shield, is characterized by a large-scale heating event that occurred about one billion years ago, an unusual setting for a diamond mine.

The research group dated and analyzed the makeup of diamonds, their minuscule inclusions and the mantle itself, said Stachel, who is also director of the Canadian Centre for Isotopic Microanalysis.

“The level of detail collected in this study couldn’t be done anywhere else in the world,” he said, referring to U of A analytical facilities in which almost $30 million has been invested to enable scientists to probe the age and origins of diamonds at the micro-analytical level.

Stachel said the research results for the Victor Mine could apply to other regions around the world that experienced geologically "young" overprint, in particular in Western Canada.

“In the long run, this could make a big difference in diamond exploration,” he said.

“The groundbreaking work being done through the De Beers Laboratory of Diamond Research, which forms part of the Diamond Research Group at the University of Alberta, is helping us better understand Canada’s diverse geology,” said Julie Kong, senior exploration manager with De Beers Group Exploration Canada.

Since 2003, De Beers contributed more than $200,000 for the diamond research lab and to support a variety of research programs.

The study, jointly initiated in discussions between Stachel and Kong, was a collaborative research and development project that involved undergraduate, graduate and staff researchers, including students in the NSERC CREATE-funded Diamond Exploration Research and Training School (DERTS), as well as geologists from De Beers.

Funding for the project was provided by De Beers Group and the Natural Sciences and Engineering Research Council of Canada (NSERC) through a Collaborative Research and Development grant.

The study, “The Victor Mine (Superior Craton, Canada): Neoproterozoic Lherzolitic Diamonds From a Thermally-Modified Cratonic Root,” was published in Mineralogy and Petrology.