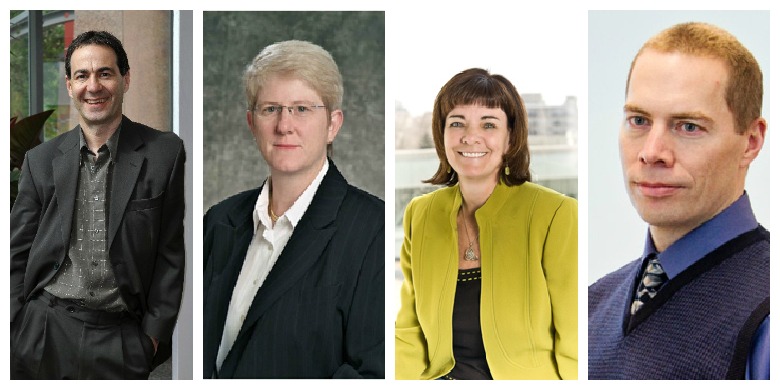 Alberta Health Services announced on Oct. 23 the appointment of scientific directors for five of the province’s Strategic Clinical Networks (SCN). Four of the appointees are U of A researchers from the faculties of medicine and dentistry, nursing, and rehabilitation medicine, and the school of public health:

“These members of the University of Alberta faculty represent the best of their respective research areas. They are leaders and innovators who work tirelessly to advance the health needs of Albertans, Canadians and the world,” said Lorne Babiuk, vice-president of research at the U of A.

“We are proud of these ongoing efforts here at the U of A, and we encourage and support the work they will be doing for Albertans with AHS.”

Each scientific director will be responsible for developing, implementing and assessing research outcomes for their respective SCN, working in a leadership role on core strategy and liaising with senior AHS officials.

“The scientific directors will engage their network colleagues to champion a broad provincial health research agenda which addresses the health needs of the SCNs’ target populations,” wrote Kathryn Todd, AHS senior vice-president of research, in a memo to SCN committee members and AHS leadership.

Todd added the directors will be accountable for SCN research grant activities, publications and translating knowledge into action “to ensure every Albertan has access to high-quality health care.”

The four scientific directors will retain their faculty positions at the U of A during their AHS appointments. Woodhouse said the new positions provide a wonderful opportunity to link research and clinical practice, something that hasn’t been done before in Alberta.

“It’s a golden window of opportunity to have practice-based evidence drive research and evidence drive practice,” she said. “It’s a tribute to the universities for being willing to collaborate with AHS and for AHS to have the foresight to say, let’s turn the system upside down.”

Norris, a professor of nursing with joint appointments in medicine and public health, said the new role enhances her current cardiovascular research activities at the university where she has received support and mentorship to pursue research and funding.

“The University of Alberta started me off on the path and helped me get to know the community, to network and do the research I do,” she said. “This new role increases the network of people I can access to improve the quality of care for patients in Alberta.

AHS also appointed Jayna Holroyd-Leduc of the University of Calgary to the Seniors’ Health SCN. The scientific director for the Cancer Care SCN will be announced later in 2012.