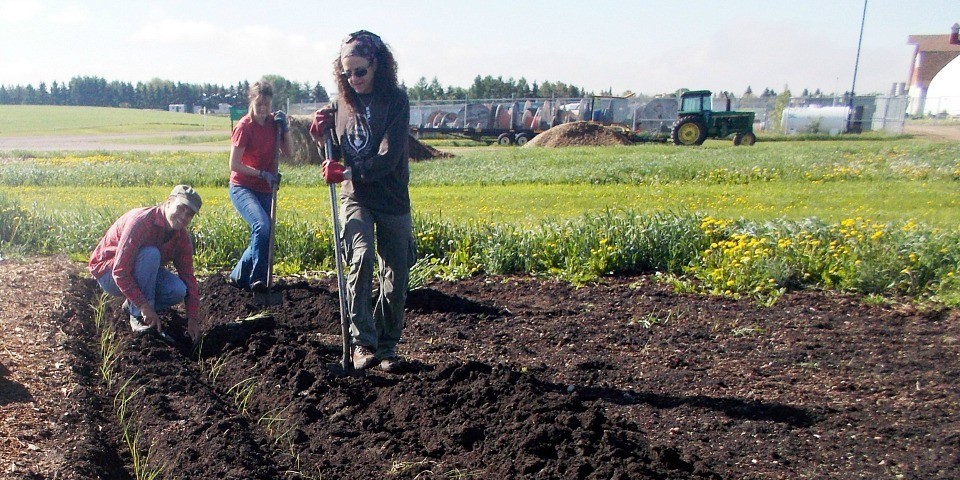 (Edmonton) A new garden at the University of Alberta is teaching urbanites that a solution to food insecurity lies in their own backyards.

The Prairie Urban Farm–a one-and-a-half-acre mixed-crop garden on South Campus–was created by members of the Faculty of Agricultural, Life and Environmental Sciences who identified a gap in the university’s research and teaching on food security.

“The purpose of the farm is to motivate more food growing and food literacy amongst local people in the Edmonton area and beyond, and also to encourage all sorts of consumers in cities to play a more active role in their relationship to food,” said Debra Davidson, a director of the farm and a professor in the Department of Resource Economics and Environmental Sociology.

The farm is funded through a Sustainability Enhancement Grant from the university’s Office of Sustainability. About 50 volunteers from both inside and outside the university help out with the garden by taking care of crops and doing aesthetic upkeep on the land.

Davidson says urban gardening creates a safety net for people in cities, who are most vulnerable to food security issues because they don’t grow their own food.

“There’s a tremendous amount of potential for cities themselves to provide a food safety net for their residents for those time periods in which food prices spike because of drought in California, or because of wildfires, or whatever the case may be,” she said.

The team will harvest its first crops later this summer, with volunteers receiving the bulk of the produce. They also plan to donate crops from the farm to food banks, starting with the university’s Campus Food Bank, and then eventually sell products at local farmers' markets.

Davidson acknowledges the farm won’t be able to feed a city but she hopes it will prove what kind of growth is possible in unlikely spaces.

“The kind of problems we face in society today really require universities to rethink how we’re contributing to society. The garden, in a sense, is an effort to take the role of universities outside that box and explore ways that we, as members of the university—and the university itself—can make a more substantial and positive contribution to a major social problem.”