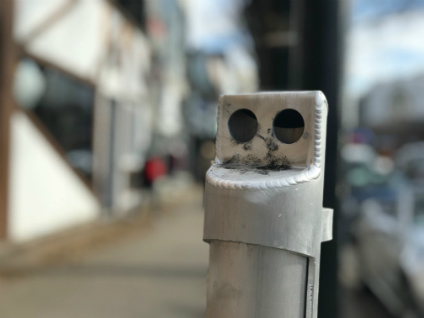 The new street ashtrays have openings on the side to protect against the elements, and are easier to clean. (Photo: Geoff McMaster)

Improved canisters at designated smoking areas in Edmonton started off as a class project for three U of A design students. 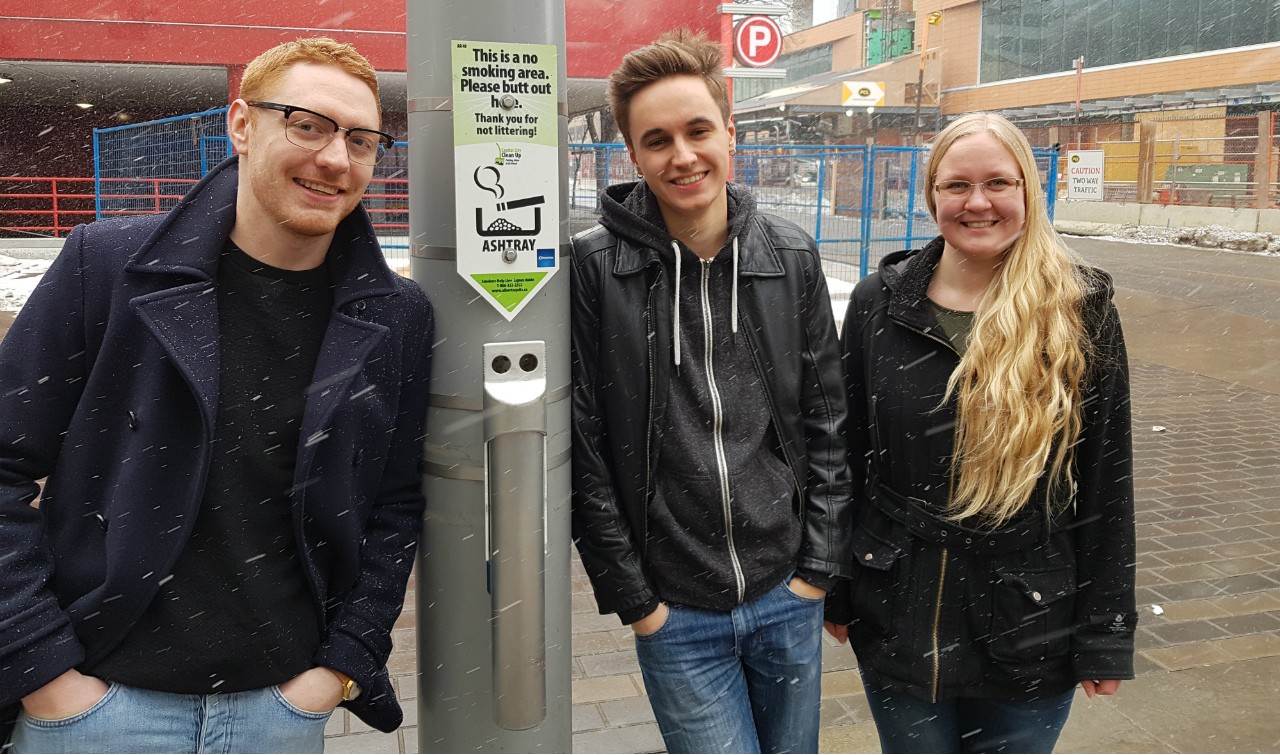 (From left) Matthew Carr, Connor MacDonald and Jayleen Wilke came up with the design for Edmonton's new street ashtrays for a class project at the U of A. (Photo: City of Edmonton)

New and improved ashtrays aimed at keeping some of Edmonton’s busiest streets free of cigarette butts and cannabis roaches owe their clever design to three University of Alberta students.

The ashtrays along Whyte Ave. and Jasper Ave. are intended to tackle one of the city’s biggest litter problems while keeping cannabis remains away from children and pets. They also let cannabis smokers know where it’s OK to spark up.

New bylaws mean vaping and smoking either cannabis or tobacco is prohibited closer than 10 metres to doors, windows, patios, bus stops and air intakes. Smoking is also restricted in parks.

Matthew Carr, Connor MacDonald and Jayleen Wilke first started working on the ashtray as a class project in industrial design two years ago. It was a hypothetical challenge from the city at the time, but when it finally came around to seeking proposals, the three decided to throw their hat into the ring.

"We thought, ‘We already have a proposal and are all ready to go, so why not?’” said Carr. Of all the contenders, theirs came out on top.

“I was very much impressed,” said Don Belanger, program manager for the Capital City Clean Up. “Clearly a lot of thought went into the design,” which met all requirements for functionality, durability, materials and environmental concerns, he said.

But when Carr, Connor and Wilke, who have since graduated from the U of A, were formally handed the project, they realized they were far from done.

"There's a difference between doing something for school and real-world application,” said Carr. “The initial design didn't really take into account cost or manufacturing processes, so we had to re-approach it to make it as affordable as possible, and ideally manufactured by the city, since the ashtrays do get vandalized quite frequently."

The old cigarette ashtrays were filling up with water, dirt and trash because the openings were too big and placed at the top of the canister, exposed to the elements. The canisters were also easily vandalized and sometimes stuffed with syringes and other hazardous material that posed a danger to cleaning staff.

"We wanted the canister to be easily removable, so it can be attached anywhere and easily cleaned," he said. “At any given time, the old ones were full of gunk in the bottom that was really hard to get out.

"If someone throws a pizza slice on the top of your disposal, it can't be used by anyone. So we tried to solve that by having smaller, multiple entry points.”

The new ashtrays have two quarter-sized openings on the top side of the canister. They cost $260 each to make, plus another $55 to install. Removing old ashtrays from prohibited smoking areas will cost $55 each.

“We used as many prefabricated materials as possible,” said Carr. The bottom of the unit is a standard aluminum tube; the top is a tube cut and welded into shape, requiring “a little bit of shop work, but not too much. It's something the City of Edmonton fabrication shop is able to do fairly easily."

Replacement ashtrays will be placed at designated smoking areas, said Belanger. There are 250 ashtrays as of this week in the downtown area and on Whyte Ave., with 100 more coming soon around town. Eventually, the city plans to have 720 in place.

“This is an entirely new world,” Belanger said of cannabis legalization, pointing out it’s only coincidence the first ashtrays were ready in time for Oct. 17. The redesign was launched primarily with cigarettes in mind.

“We have to see what the trends are with people smoking—whether tobacco or cannabis—and just who is using the ashtrays.”