Verbal abuse and physical violence could be curbed with more education on rules and a mentorship system, researchers say. 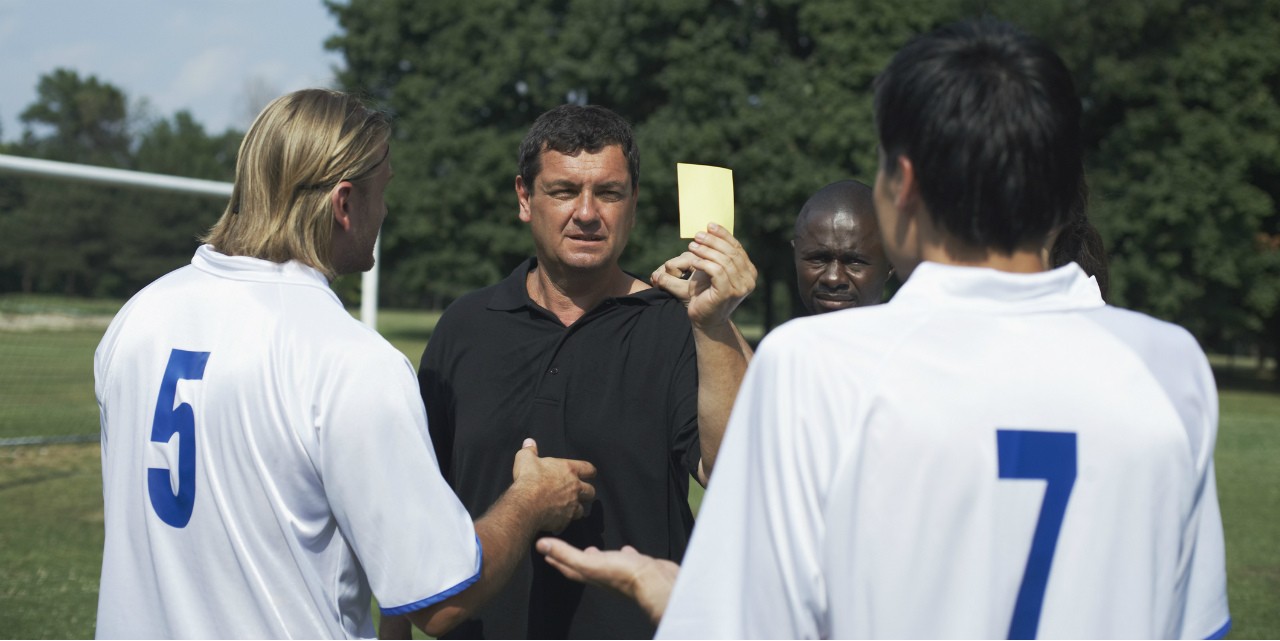 UAlberta researchers found that most incidents of verbal abuse or physical threats against referees happened in lower tiers of men's soccer, where understanding of the rules tends to be more hazy.

Soccer league administrators looking to limit verbally abusive and violent on-field behaviour may want to consider implementing a crash course in the rules of the sport and equipping their referees to better deal with confrontation, according to new University of Alberta research.

In 2015, Colin Deal and his PhD supervisor Nick Holt were approached by a provincial soccer organization concerned about an increase in severe disciplinary incidents in which referees had been verbally or, in some cases, physically abused in senior men’s leagues.

In the previous six seasons, 98 incidents involving abuse of an official had taken place—from four in 2010 to 27 five years later.

Deal said most of these incidents were some combination of foul and abusive remarks, including gender or racial slurs. However, more concerning was the proliferation of the next three most common types of incidence: physical threats directed at officials or their families, deliberate physical contact such as chest bumping or shouldering an official, and deliberate violent conduct including spitting, kicking or punching.

“All incidents that have no place in sport,” said Deal, of the Faculty of Kinesiology, Sport, and Recreation.

When he broke down the numbers a little bit more, he found the vast majority of incidents were occuring in the lowest tiers, typically occupied by newer or less skilled players. Of the nearly 88 incidents in which a level of play was identified, 55 of them occurred at tier 3 or lower.

Deal then conducted interviews with 10 players who had witnessed an incident, nine referees and three members of the sport organization’s disciplinary committee to determine some of the contributing factors to the incidents.

“Our interviews largely focused around the retelling of stories,” said Deal.

He explained it became clear during the interviews that there was a perception among the participants that part of the problem stemmed from low game knowledge among players at the lower tiers.

“It was believed that this lack of knowledge, or specifically what is or is not in fact a foul, would lead to a lot of frustration, particularly when a referee called a foul that was believed by the offending player not to be a foul—that seemed to be at the heart of a lot of these incidents,” said Deal. “There is some degree of physicality allowed, but the line of when a play becomes a foul and when it becomes rough play is a little blurry, especially in the lower divisions.”

Deal said the interviews revealed that discrepancies in officiating and inconsistency in game management or use of “soft skills” among referees was also seen as a trigger for objectionable behaviour.

“The interview participants crucified officials who would blow the whistle, wave the red card and walk away,” said Deal.

Other factors that contributed to these incidents were coaches’ attitudes and their perceived lack of knowledge, the importance of the game, rule changes between different seasons and transparency of the disciplinary process.

Based on the interviews, Deal and Holt believe a more targeted educational effort regarding rules and conduct, especially for players in the lower tiers, would go a long way in curbing the league’s behaviour problem.

The pair also recommended the league look into implementing a referee mentoring system.

“A lot of the participants were advocating for a formal mentoring program where a junior referee would be paired with an established referee to help develop those soft skills.”

Deal said the study design didn't allow for a definitive determination of why these incidents appear to be increasingly common, but he suspects there is probably an element of increased awareness and lower tolerance for these types of behaviour.

As for generalizing his findings to other sports, Deal suggests some elements of the study are pretty intuitive.

“While educational efforts, referee mentoring and more transparent disciplinary procedures are probably good ideas in general, each organization should tailor its responses to the particular circumstances in its leagues.”

The study was published in February’s Sport Management Review.