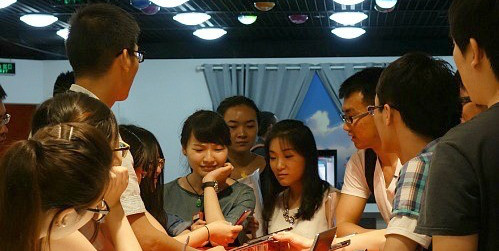 UAlberta students and Peking University students in the new Joint Summer Program on Innovation and Entrepreneurship learn about IT technologies at Lenovo in China. (Photo: Cen Huang)

(Edmonton) The University of Alberta has been busy this summer deepening its engagement with China through a unique study-abroad program at Peking University and a high-profile international workshop held in Harbin, focused on building dual PhD programs between Canada and China.

A first-ever session of the U of A’s new Joint Summer Program on Innovation and Entrepreneurship took 13 Chinese students from the university’s faculties of arts, business, engineering and science to Beijing, where they paired with fellow students from Peking for three weeks of dynamic interactive learning July 7 to 25.

Together, the students took in presentations by accomplished Chinese scholars and industry leaders, visited various business and industry sites and a state lab, and took on a research challenge issued by the Chinese computer company Lenovo to explore mobile video communication technology.

The company was so impressed with the resulting work, it invited students from both universities to consider applying for internships, said Cen Huang, executive director of international relations and recruitment, and assistant vice-president of University of Alberta International.

The students liked the hands-on insight into Chinese innovation that the learning experience provided, added Huang, who pioneered the summer program for the U of A.

“Students noted how they all learned about the many different aspects of new developments in the Chinese economy, technology and Chinese society,” said Huang. She believes this program, which will be offered to U of A and Peking students annually, will enrich how international education is defined, given its unique design.

“With this program, we are adding a new dimension to the existing conception of international education. It should be truly bilingual, bicultural and bidirectional.”

By focusing on developing students’ innovative and entrepreneurial abilities, the U of A nurtures the promise made by founding president Henry Marshall Tory to uplift the whole people, said Carl Amrhein, provost and vice-president (academic).

“Here, the whole people refers to people from around the world, as represented by the diverse student body at the U of A. It is my belief that, no matter whether our Chinese students choose to stay in Canada or go back to China after they finish their studies at the U of A, they will maintain their Canadian connections as U of A alumni and will contribute to the prosperity of both countries. We need to invest in their careers and their futures.”

As the study-in-China program was taking place in Beijing, in Edmonton’s sister city of Harbin the U of A was co-hosting, along with the Harbin Institute of Technology, a high-profile Canada-China workshop on building dual PhD programs.

The two-day event, held July 19 and 20, brought together leaders from 14 Canadian and 21 Chinese top universities, as well as representatives from the Conference Board of Canada, the Canadian embassy in China and the China Scholarship Council, to discuss key issues in establishing dual PhD programs between the two countries. Topics included policies and regulations, program models, joint research and supervision, and quality assurance.

Participants from both countries endorsed the value of PhD programs in enriching students’ learning experiences and in strengthening research collaborations.

“Along with more rigorous research training through joint supervision, such programs will also equip students with the international competencies needed to take on diverse employment opportunities in both academic and non-academic settings,” Huang said.

The workshop concluded with the development of a seven-point set of Harbin Principles as a declaration of commitment from all participating universities to building dual PhD programs. The U of A is now taking the lead in helping to develop a protocol for establishing such programs, Huang noted.

The Harbin event—following in the footsteps of two earlier forums held in China in 2012 and Edmonton in 2010—continues the U of A’s leadership and contribution to important dialogue between the two nations about graduate education collaboration, Amrhein noted.

The workshop was key in fostering important ongoing relations for higher education in Canada, he added.

“It is important for Canadian academic leaders to spend time in China, to meet with our counterparts and to get to know more about the Chinese system so that we can do a better job working with our Chinese partners in higher education.”