U of A engineering researchers find ways to turn waste fat, oil and grease into a supply of renewable energy. 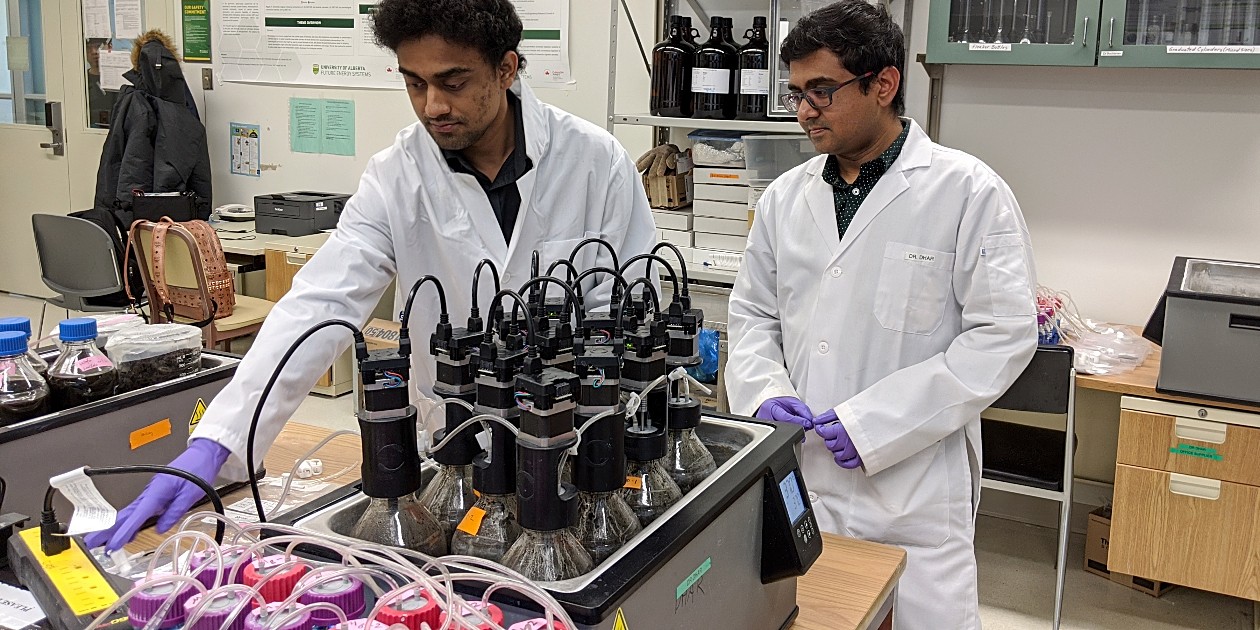 Environmental engineering master's student Bappi Chowdhury (left) and supervisor Bipro Dhar in the lab with a "digester" they are developing that uses microbes to convert a mixture of food waste and fat, oil and grease into renewable biomethane. (Photo: Sean Townsend)

University of Alberta engineers have found a way to turn waste fat, oil and grease into a steady supply of renewable energy.

In a recent study, environmental engineering master’s student Bappi Chowdhury and his colleagues found that adding conductive materials to the waste products could potentially turn them into a reliable feedstock, allowing for a production rate of up to 70 per cent more biomethane—a renewable energy source—from a mixture of fat, oil and grease and ordinary food waste in an anaerobic digester.

Energy-rich, fat-filled wastes are extremely slow to break down, forming barriers that stymie microbial digestion or floating to the surface at waste treatment facilities, which collect biomethane in the process. Despite their high energy potential—fats are composed of longer carbon chains that naturally degrade into natural gas—these substances often wind up in landfills, where they slowly degrade and are released into the atmosphere, a particular problem because methane is roughly 30 times more potent than carbon dioxide as a heat-trapping gas.

The findings could have implications for municipalities struggling with clogged sewer lines, industrial agricultural facilities dealing with animal waste or governments hoping to reduce climate impacts.

“It could solve a lot of problems,” said Chowdhury, who was the lead author of the study. “It’s sustainable, renewable energy, because as long as there are people, there will be food waste.”

Conductive materials have long been used in waste and wastewater treatment, but only in the past decade have they been used to stimulate biomethane production.

A substance like granular activated carbon—the conductive material most effective in the new study—is better known for removing compounds that affect the smell and taste of treated water. But according to Bipro Dhar, a U of A assistant professor of environmental engineering, activated carbon can also function as a hub for microbes looking to dump or pick up electrons as part of biochemical processes.

“It can change how microbes interact,” said Dhar, who supervised Chowdhury’s research. “It can significantly enhance how fast we can degrade those organics and produce biomethane.”

The study also involved adding food waste to the mix to improve yields. Chowdhury found an optimal recipe of 70 per cent food waste—sourced from waste from the HUB Mall on the U of A’s campus—and 30 per cent fat, oil and grease from GHD Canada, an Ontario-based industry partner. He tested two conductive materials, granular activated carbon and magnetite, to see which worked better. The first conductive material reduced the time of decomposition from 20 to 25 days to just seven.

There’s a second reason that granular activated carbon works so well. Microbes that naturally break down lipids and fats grow right on the conductive materials. A wider range of microbes remain in the mix in the digester, ensuring decomposition is more efficient than it would be on its own.

“There was more enrichment of micro-organisms,” Chowdhury said. “There are so many microbes attached to the surface, it creates more balance.”

The new study is a potential game changer in treating organic waste, which makes up to 40 per cent of municipal waste in Canada and five per cent of global greenhouse gas emissions.

Dhar lists a number of potential scenarios. If fat, oil and grease could be readily and reliably digested, a city like Edmonton might accept agricultural waste or restaurant waste to enhance its organic waste treatment. A rural poultry farm might switch from transporting waste hundreds of kilometres and opt to generate power and heat on site. A rural area in a developing country could generate more electricity from waste. Because anaerobic digesters can work at a variety of scales without a significant retrofit, it’s a solution that could potentially be implemented globally.

Dhar sees another upside in the reduction of waste methane, a far more potent greenhouse gas that many overlook as a contributor to climate change.

“The major problem with landfills is organic waste,” Dhar said. “Any kind of organics will eventually degrade and produce methane gas.”

In 2015, Epcor estimated that it spent $2 million cleaning 1,200 kilometres of Edmonton sewers, along with another $1.6 million inspecting lines throughout the city. While the city has “Store it, don’t pour it” campaigns, the household grease that clogs sewer lines could one day be collected as a valuable resource.

“This is a very important project,” Dhar said. “We have a huge amount of fat, oil and grease produced across the country.”