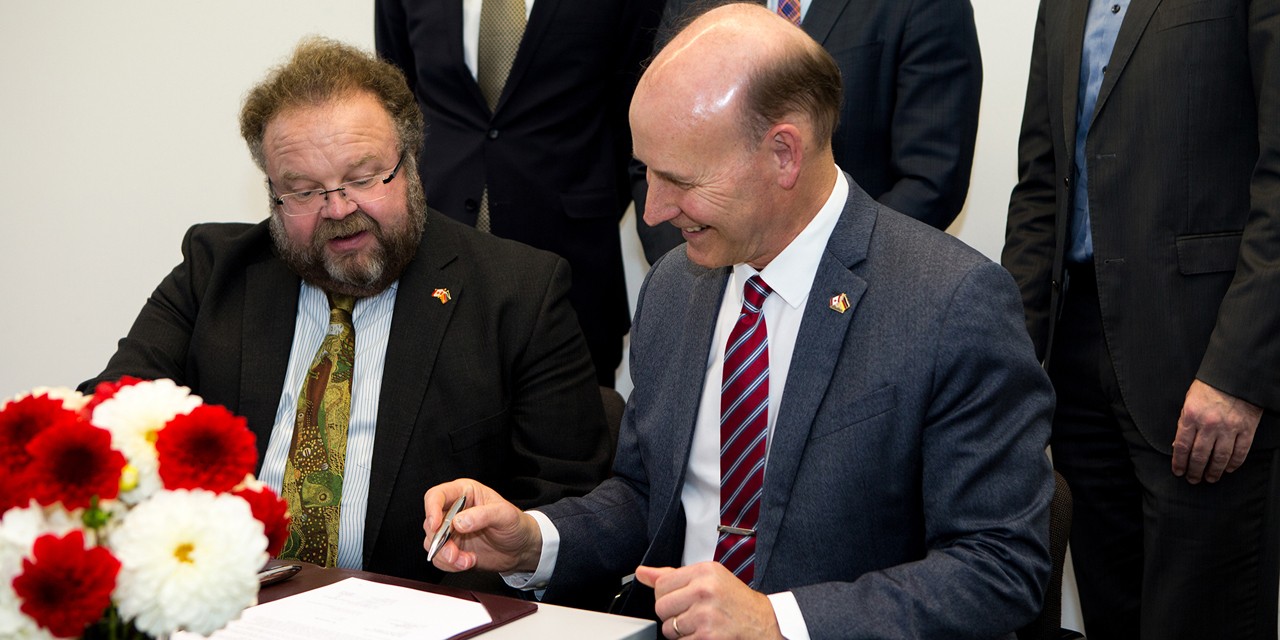 A shipping container-sized pilot plant that can process a variety of wastes into valuable biofuels will be shipped from Germany to Edmonton thanks to a new future energy research collaboration between the University of Alberta and Germany’s Fraunhofer Society.

The plant, known as Biobattery, uses thermo-catalytic reforming (TCR) technology developed by Fraunhofer bioengineering researcher Andreas Hornung to process a variety of wastes into three valuable products––bio-oil, char and gases––at a rate of 30 kilograms per hour.

“Depending on the situation, the TCR unit could power itself with one of those products, while we utilize the others,” said Hornung. “With the correct feedstock, it could even produce viable jet fuel.”

The Biobattery project will test a variety of Alberta feedstocks such as municipal, agricultural and forestry waste. Hornung said he has begun testing this technology in Birmingham, UK, but in Alberta the TCR could allow communities to turn local waste products into energy. However, the technology’s practicality would vary across the province.

“The business case for a TCR unit is highly dependent on what waste products are readily available in a given area,” said Amit Kumar, deputy director with Future Energy Systems and principal investigator on the joint Biobattery project. “Our research will assess Alberta waste products to see which ones produce viable fuels, so we can understand what characteristics a community would need for this technology to make economic and environmental sense.”

The TCR test unit is expected to arrive in Edmonton in 2018.

The Biobattery project is part of a new technology platform partnership between the U of A and Germany’s 69-institute Fraunhofer Society to support joint projects that develop new energy technologies and test them with Alberta feedstock material. Biofuels, storage batteries and alternative uses for carbon dioxide will be some of the first topics.

The platform agreement was signed in Munich, Germany, on behalf of the U of A by interim vice-president (research) Walter Dixon, who traveled with an Alberta delegation led by Economic Diversification and Trade Minister Deron Bilous.

The Fraunhofer Society specializes in technologies for real-world applications, and through the $75-million Future Energy Systems research initiative, U of A researchers will have the chance to put cutting-edge equipment to the test.

“These are new technologies that can directly benefit Alberta communities, and need to be assessed in the real-world,” said Kumar. “Our expertise in life-cycle assessments and the unique testing opportunities with Alberta feedstock make us natural partners with Fraunhofer.”

Kumar added the agreement established a platform upon which many future energy technologies can be developed for use in Canada, Germany, and around the world.

In fact, plans are being developed to bring Fraunhofer-developed Vanadium Redox-Flow battery technology to Alberta for testing. Redox-Flow batteries are intended to support renewable power installations, allowing intermittent energy from sources like solar and wind to be temporarily held for later use. Future Energy Systems researcher Ryan Li may lead a project that integrates this technology into an Alberta grid, and assesses its effectiveness and cost.

The Government of Alberta’s ministry of Economic Development of Trade, Alberta Innovates, Susteen Technologies Canada and WestJet joined Future Energy Systems and the U of A as partners on the Biobattery project.