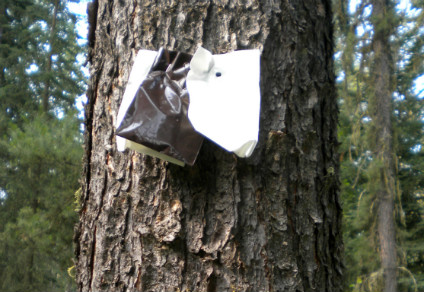 Pine beetle traps that combined two tree chemicals and a pheromone bait were up to 82 per cent more effective than standard baits.

Researchers change chemical recipe of baits and their placement to catch more of the destructive bugs.

As the voracious mountain pine beetle advances on untouched forests, researchers are testing new ways to trap more of the bugs in hopes of preventing damage to trees.

By tweaking the existing bait and changing up the spacing of pine trees used to trap and monitor the spread of the mountain pine beetle, UAlberta researchers caught greater numbers of the pest.

“As part of an operational control program, these methods could potentially weaken the spread of mountain pine beetle,” said lead researcher Jennifer Klutsch.

In 2016, the beetle was discovered attacking not only Alberta’s lodgepole pine, but also new, mixed habitats of lodgepole and jack pine along with pure jack pine forests, said Klutsch, a post-doctoral researcher in the Faculty of Agricultural, Life and Environmental Sciences. The insect has already devastated lodgepole pine forests in British Columbia and the United States—millions of pine trees have been killed over the past decade in western North America.

“With this new threat, we needed to find out what Alberta-specific monitoring techniques should be and how to deploy them,” Klutsch said. “Alberta has a different host pine than B.C. that is new to the mountain pine beetle. Each species of pine has different types and levels of chemicals that could change how the beetle behaves. Since tree chemicals are so important for the beetle to find its host, and the current baits were developed on lodgepole pine or ponderosa pine, we needed to test whether they would work or could be improved in Alberta, where there are lodgepole and jack pine hybrids and pure jack pine.”

Klutsch began collaborating in 2014 with Alberta Agriculture and Forestry and two industry partners, running tests over three years in the thick pine forests that stretch from Swan Hills to Whitecourt to Fox Creek, in northwestern Alberta.

To explore the question of a more effective bait, they experimented by using two tree chemicals instead of just one type, which is the usual practice in attracting the beetle. They discovered that the one-two punch of the extra chemicals, hung on tree traps along with a standard bag of pheromones, attracted 51 to 82 per cent more of the insects than other baits.

The amped-up formula worked better in Alberta than what is currently being used in B.C. and the United States for monitoring beetle attacks in lodgepole pines, Klutsch noted.

At the same time, the study’s findings, published recently in the Canadian Journal of Forest Research, could cut back on costly, labour-intensive field work if adapted into provincial and industry management policies, Klutsch said.

Government foresters currently use a triangular formation spaced every eight kilometres to monitor beetle spread, but Klutsch was curious about how other layouts might attract more of the insects, so they tested the distances between baited trees.

After testing triangular, square and rectangular formations at one-, four-, eight- and 12-kilometre intervals, they found that a square-shaped group of four trees was three times more heavily attacked than a rectangle of six trees and 1.5 times more than a triangle of three trees.

“The square formation had more mass attacks, which means there are a larger number of beetles you take out of the population when the trees are removed. We can prevent them from spreading outside that stand,” Klutsch said.

They also discovered that the squared trees could be baited 12 kilometres apart instead of just eight.

“You could use the 12-kilometre distance and still get the same information, which means fewer trees to check. It would mean less time and manpower and resources being put into monitoring mountain pine beetle.”

The research was funded by fRI Research, a not-for-profit corporation, and the governments of Saskatchewan, Manitoba and Ontario.