Fashion in Print showcases evolving dress styles over 300 years to explore how we see ourselves and the world through what we wear. 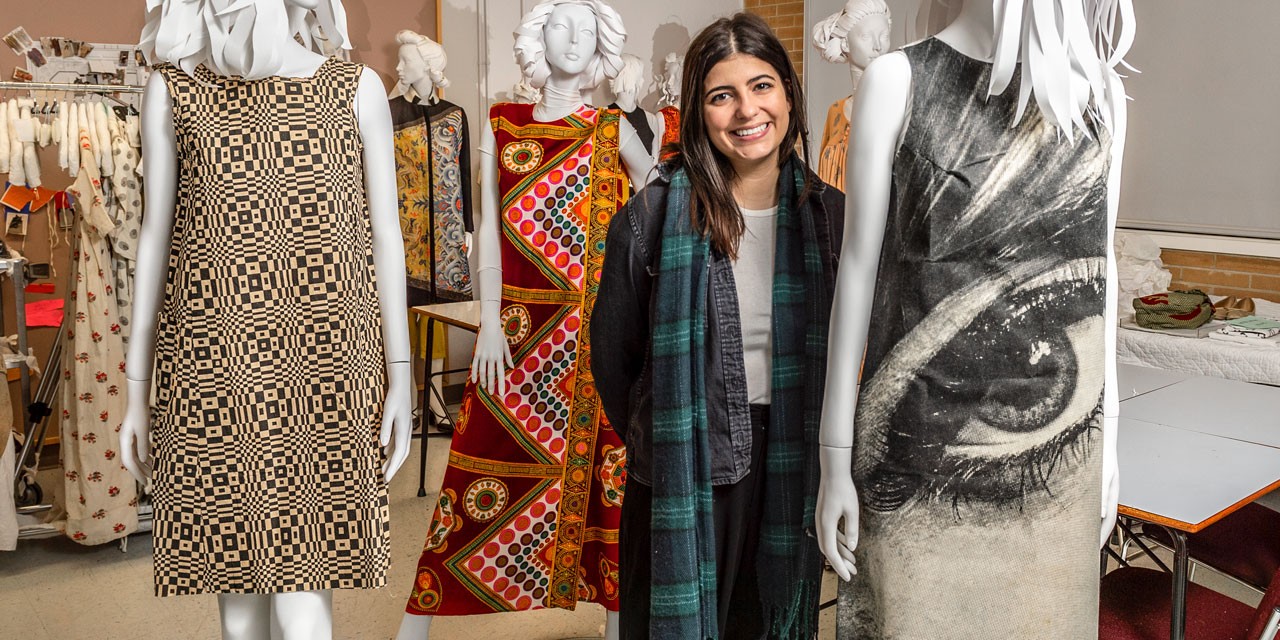 U of A student Gabriella Sequeira with the disposable paper "eye" dress she researched for the Fashion in Print exhibit. “It’s the poster child for 1960s consumerism,” she says of the dress, which sold for $2.50 in 1968. (Photo: Richard Siemens)

Those paisley scarves and plaid shirts are more than just pretty faces in your closet—they’re also a reflection of the times.

We love print fabrics for their visual pop, but on a deeper level, they can reflect social patterns, said Anne Bissonnette, co-curator of Fashion in Print, a new University of Alberta exhibit opening tomorrow.

“Fashion is a strong non-verbal language, and prints are part of its vocabulary; they are so broad, so universal,” Bissonnette said. “For instance, were the people in their pink pussyhats saying something? Prints can be used to represent real societal debates.”

Beyond old-fashioned polka dots and modern geometric designs are deeper questions about how we see ourselves and the world through what we choose to wear, Bissonnette noted. “It’s part of our self-performance.”

Using 18 pieces pulled from the U of A’s Anne Lambert Clothing and Textiles Collection, Bissonnette and her fourth-year human ecology students showcase print fabrics ranging from the 1700s to modern day, each with a story to tell.

“We talk about different cultural groups and different visualizations of culture.”

Fashion in Print explores a handful of weighty themes pinned to dress history, including cultural identity and appreciation versus appropriation, when ethnic designs are borrowed in the name of fashion. Front and centre in the exhibit are 1970s garments like an African-inspired jumpsuit and a French designer coat dress, along with contemporary pieces like a dress featuring Cree syllabics from U of A alumnus and Indigenous designer Derek Jagodzinsky.

“We want people to question the borrowing of different motifs from outside their own ancestry; what is appropriate use and is there a responsibility behind this use? It opens up a Pandora’s box of issues around colonization, creativity and accountability. We want people to ask themselves critical questions as they view the exhibition,” Bissonnette said.

A 1770s man’s velveteen suit with an all-over print—something normally seen in women’s and children’s garments today—touches on another use of prints in defining gender boundaries. “Current expectations of how we dress and express ourselves includes the appropriate use of print at certain times and places, and for certain genders—why is that?”

The exhibit also explores identity and cultural expressions through some of its pieces. Printed with a popular red symbol known as Gye Nyame, a Ghanaian blouse and skirt express the omnipotence and immortality of God.

And Fashion in Print celebrates the aesthetics of printed clothing, featuring enduring themes that never go out of style, like florals. “They’ve never left us,” Bissonnette noted.Flowered gowns from the 1790s to the 1970s, including an example from Italian designer Emilio Pucci, all differ in structure, from soft and flowing to stiff and corseted.

“If you read these garments and their motifs, they echo ideas of femininity that were constantly changing with the times.”

The exhibit also gives technology a nod in the development of print fabric, ranging from hand-stamped 18th-century methods to modern-day digital printing, using the example of a 2012 designer coat that plays with imperial Chinese garment imagery.

“Printing technology has opened up limitless possibilities for individualized prints and global flavour,” Bissonnette noted. Hand in hand with that is the idea of consumerism and fast fashion—cheaply made clothing that is barely worn and then tossed aside—and as one exhibit piece shows, it’s not necessarily a new concept.

A disposable paper dress, sporting a huge mascara-heavy eye in its centre, was originally sold in 1968 for $2.50 at Hudson’s Bay and was meant to be worn once or twice, then thrown away.

“It’s the poster child for 1960s consumerism,” said student Gabriella Sequeira, who researched the funky black and white dress for the exhibit. One of two paper dresses featured, the eye dress reflects the consumer culture that boomed after the Second World War as North America began a new era of prosperity.

Paper dresses—originally created by the Scott Paper Company so a stylish, hip hostess would match her party plates and napkins—had a “built-in obsolescence” that encouraged more consumerism, Sequeira noted. “It’s interesting to see how far back this throwaway culture goes. It proves we still have a long way to go.”

The exhibit also holds some unexpected surprises; geometric prints that you’d expect to see today are printed on some pieces from 150 years ago. “It surprised me, because it almost looks modern. It challenges the notions we have of the past,” she said.

Sequeira hopes people see all the circles, squares, squiggles and flowery finery in their own closets with new appreciation after viewing the exhibit.

“It’s a reminder that dress isn’t frivolous, it was born out of economic and social circumstances.”