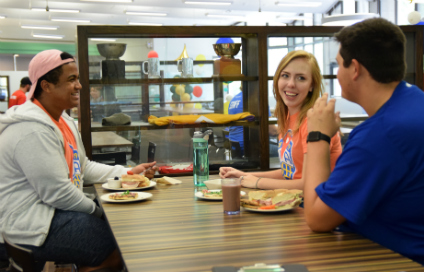 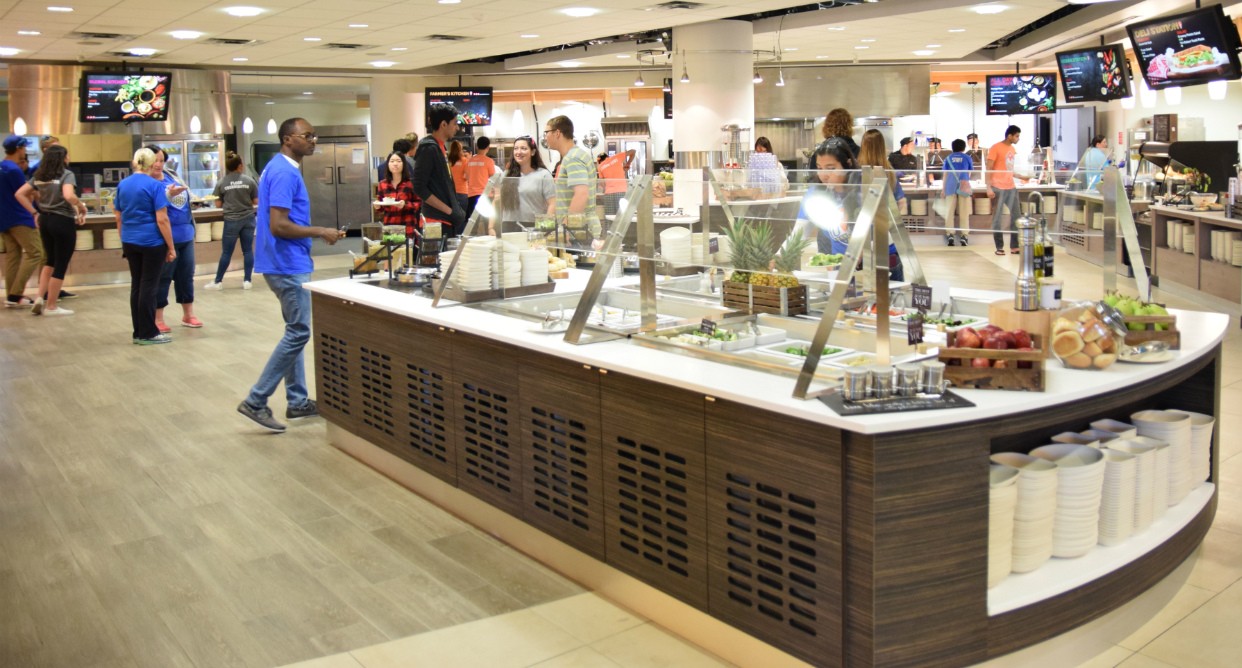 Students living at the U of A's Lister Centre residence will find more food options and longer hours at the dining hall with a new flat-rate meal plan beginning this year. (Photo: Eric Athanas)

More food choices, longer dining hall hours and free coffee at participating java joints across campus are some of the features of the new meal plan being rolled out this year for students living in the Lister Centre residence.

As a result of a four-year consultation process that began in 2014 in which students expressed low satisfaction ratings for the former meal plan, the university’s Ancillary Services, which oversees dining services, has developed a new model based on similar successful programs at other Canadian universities.

Residents will pay for seven-day or five-day meal plans at a cost of $4,999 or $4,400 for eight months. They can eat as much as they want in the Lister Centre or Peter Lougheed Hall dining halls each day—in fact, the latter residence ran this meal plan last year and received positive feedback with 75 per cent of respondents giving the food a rating of either four or five out of five.

Residents can also get lunch in the Central Academic Building cafeteria or preorder a bagged lunch from their home dining hall. They can also spend $300 from their meal plan fund at select campus dining locations across campus.

Under the former “declining balance” residence meal plan, students used preloaded cards to pay for their food, and the amount they spent each day could vary greatly. This model meant purchases were unpredictable, making it difficult to supply a variety of fresh food at a good value. For students, this meant budgeting a large sum of money each semester—a difficulty for many first-year students who are already adjusting to other aspects of university life.

“The new model is all about students not having to worry about running out of food. Because I saw it, I talked to them—I’ve seen them topping up their meal plan funds,” said Dolores March, director of hospitality services. “There was no [financial] certainty for parents, there was no certainty for students.”

When March talked to staff from Wilfrid Laurier University and Carleton University at conferences, she was inspired by their flexible, flat-rate “all you care to eat”-style meal plans. Four years later, after further consultation and research, she redesigned the U of A’s meal plan.

“I thought, ‘This is what I would love for our students to have.’ They can come into the dining hall and never have to worry, ‘Can I eat healthy? Am I going to run out of money?’” said March.

Under the new plan, students living in Lister Centre and Peter Lougheed Hall will receive travel mugs for free coffee at both residences as well as Engrained in Edmonton Health Clinic Academy and Euromarket in the Education Building.

One change students will notice is they’ll have to eat in the dining hall itself, rather than taking food back to their rooms, with the exception of fruit and coffee.

“We’re hoping this will encourage students to socialize more, and provide more opportunities to build relationships with their peers,” said March.

Residents of Lister and Peter Lougheed Hall will be able to re-enter the halls as many times as they wish throughout the day, but students or staff who partake in the voluntary meal plan will redeem one meal from their cards upon each entry.

The dining halls are open later—11 p.m. for Lister and 9 p.m. for Peter Lougheed Hall—to serve residents whose extracurricular activities or course schedules mean they don’t get home by dinner time.

March is confident the flexibility will meet residents’ needs, and is looking forward to hearing the residents’ feedback.

“You’ve got to work with students,” she said. “They’ll tell you what they need.”