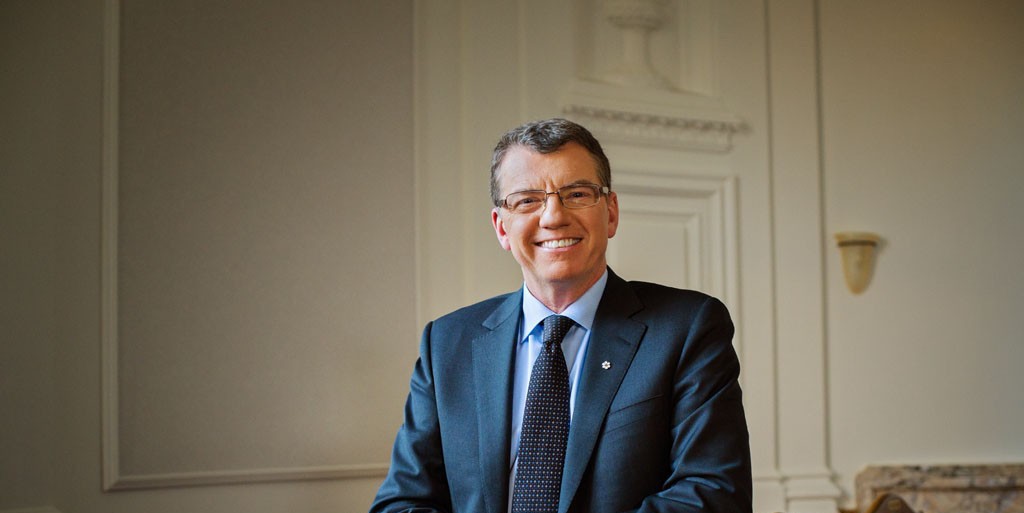 David Turpin, 13th president of the University of Alberta

(Edmonton) The University of Alberta begins a new era of leadership as David Turpin, the university’s 13th president, starts his term July 1, 2015.

Turpin takes over the position from Indira Samarasekera, whose second term as president ended June 30, 2015.

Read President Turpin's Letter to the U of A Community

"The University of Alberta is proud and pleased to welcome David Turpin to campus as he begins his duties," said Doug Goss, chair of the U of A Board of Governors. "The U of A is fortunate to have such an accomplished and visionary scholar, researcher and administrator as its next leader.

"We are confident that Dr. Turpin will build on the legacy of excellence established by outgoing president Indira Samarasekera as the U of A continues to serve Alberta, Canada and the world, through the promise of 'uplifting the whole people,' a pledge made more than 100 years ago by our founding president," Goss said.

Turpin, who most recently served as president of the University of Victoria in British Columbia, is an outstanding Canadian academic leader and renowned international scholar whose achievements are recognized across the post-secondary sector. After a global search, his appointment was approved Nov. 13, 2014, by the U of A Board of Governors.

“I am deeply honoured to have been asked to lead the University of Alberta, an institution I have long admired and that is fundamental to the social, cultural and economic development of the city, the province and the nation,” Turpin said.

“The U of A has a real sense of purpose, an excitement for what’s next, and it serves an essential role in continuing to drive the success of Alberta and Canada on the world stage. I look forward to maintaining the standard of excellence that characterizes the U of A, and building on the exceptional work done by President Samarasekera and her predecessors.”

Turpin is joined in Edmonton by his wife, Suromitra Sanatani, who has served in executive positions and as a board member for numerous organizations. A lawyer by profession, she worked in litigation before transferring her skills into the corporate and non-profit sectors. She is currently a board member of Canadian Blood Services and the Michael Smith Foundation for Health Research, and most recently served on the Social Sciences and Humanities Research Council and the Federal Panel on Conduct for Responsible Research.