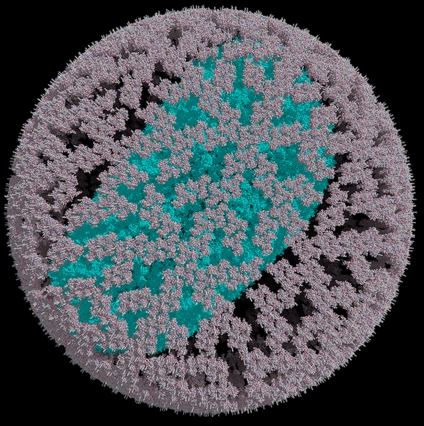 Computer model showing the spherical shape of the HIV-1 virus's shell before it unfolds to release the virus. (Image: Marcelo Marcet-Palacios)

“If our model is correct, then we can begin investigating ways we could block or interrupt the mechanism of viral entry.” 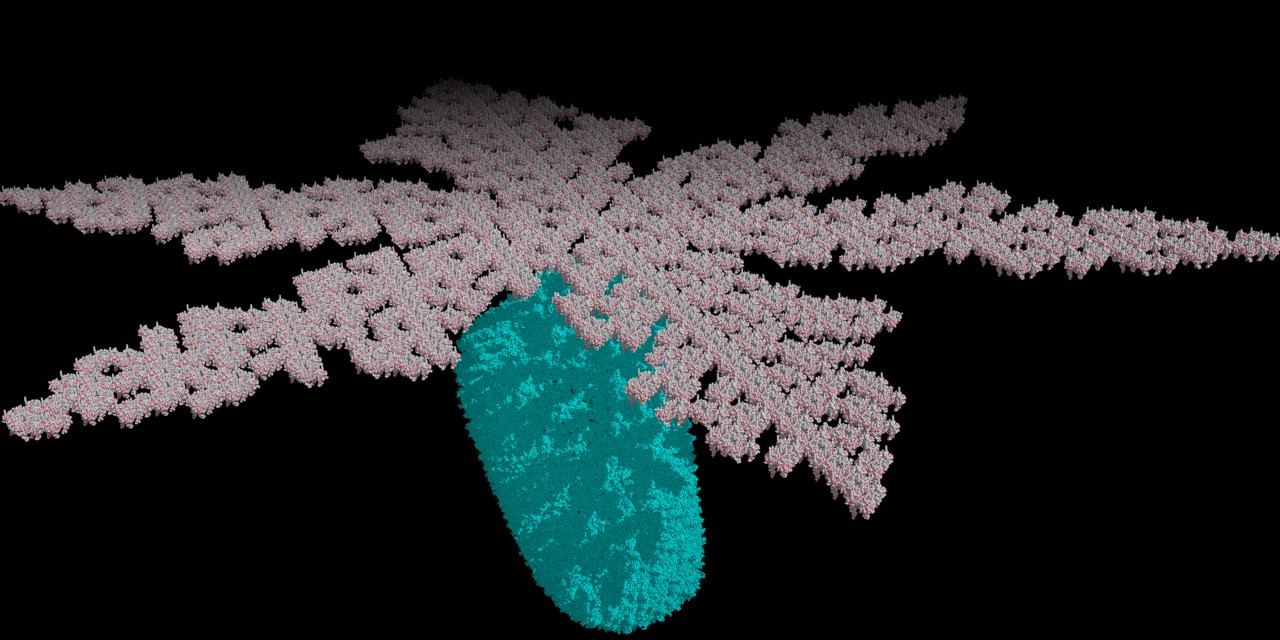 Computer model based on new research that suggests the HIV-1 virus is encased in a spherical shell, which opens like flower petals to release the virus when it infects a healthy cell. (Image: Marcelo Marcet-Palacios)

The shell of the HIV-1 virus may have a different shape than previously thought, according to a new study by University of Alberta that has significant implications for understanding how the virus functions.

The research suggests the HIV-1 virus is housed within a spherical matrix shell. When it infects a healthy cell, the shell fuses to the outside of the target cell and then releases the virus inside where it attacks the cell.

“Our new proposed structure for the HIV-1 virus has a very peculiar shape, almost like petals of a flower,” said study co-author Sean Graves. “A better structural knowledge of the matrix shell may help us understand the fusing and infection process.”

HIV-1, the most widespread and virulent of two strains of human immunodeficency virus, causes HIV infection and eventually leads to AIDS if left untreated.

The research shows that the previous model used to describe the structure of the HIV-1 matrix shell was mathematically impossible, and provides a viable alternative. The researchers have made the new model available online for other scientists around the world.

Though it is too early to anticipate whether the model will translate into new treatments for the nearly 38 million people worldwide who have HIV or AIDS, the researchers said it will help scientists better understand and predict the behaviour of the HIV-1 virus.

“Our contribution uses mathematical principles to help guide the scientific community in the right direction,” added U of A endocrinologist and study co-author Marcelo Marcet-Palacios.

“If our model is correct, then we can begin investigating ways we could block or interrupt the mechanism of viral entry—for example, by using a medication that could cross-link the ‘petals’ of the structure together to prevent the opening of the particle and thus stopping entry of the viral genome into the host cell.”

The research involved an interdisciplinary team with expertise in biology, mathematics and computing science, said Weijie Sun, a former student of Graves’ who collaborated on the study.

“This collaboration made it possible to come up with a new model consistent with previously observed evidence and allowed us to develop a computer program freely accessible online that other scientists around the world can use to recreate our work and further develop this new model,” said Sun.

The study, “Mathematical Determination of the HIV-1 Matrix Shell Structure and Its Impact on the Biology of HIV-1,” was published in PLOS ONE.