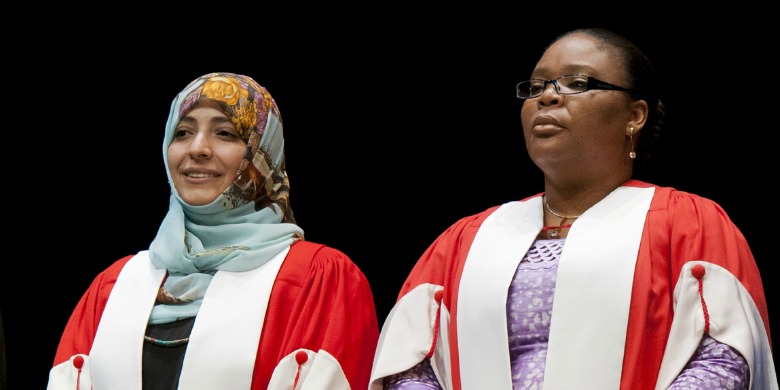 (Edmonton) Growing up, Tawakkol Karman and Leymah Roberta Gbowee may have led very different lives, but their power to mobilize and motivate others in the cause of peace and in the pursuit of basic human rights is what has bonded them together.

One became the appointed leader of women seeking an end to civil war. The other was a key player in the Jasmine Revolution in her country. Both women mobilized communities to stage non-violent protests in their countries, courageous acts of civil disobedience that helped bring revolutionary change to their respective countries. They are citizens of the world and recognized ambassadors of human rights.

Both women were awarded the Nobel Peace Prize in 2011. Today, both women crossed the stage to receive honorary doctor of law degrees and to address graduates and attendees at the University of Alberta’s fall convocation.

Gbowee, a Liberian feminist and a respected human rights activist, lived through the horrors of both the Liberian civil wars. Before the start of the second war in 1999, she undertook training as a social worker and began counselling injured child soldiers of President Charles Taylor. She became the leader and the voice of Liberian women frustrated by the endless tragedy of war and death under the Taylor regime. She continues to fight for women’s rights throughout West Africa, initially through the West Africa Network for Peacebuilding and now with her organization, Women Peace and Security Network Africa.

Building on comments delivered by U of A President Indira Samarasekera, wherein she spoke of the challenges facing graduates, Gbowee spoke of the need to stand up and continue to fight and struggle, even when faced with great adversity and overwhelming challenges. “Life will throw you all kinds of blows. You will see things that will discourage you,” she said.

She spoke from personal experiences of struggles and difficulties in her own life. Mistakes and false starts will occur, she said, but the measure of a person will not be made in the mistakes they make, but in their ability to move forward, conduct themselves with dignity and leave a positive and lasting legacy.

Karman, a Yemeni journalist and politician, was co-founder of the human rights group Women Journalists Without Chains. In the Yemen uprising during the Arab Spring, Karman led several peaceful protests against the regime of President Ali Abdullah Saleh, during which time she was arrested and threats against her life were made by Saleh and his supporters. Since Saleh’s ouster, she continues to be an active spokesperson, opposing examples of violent, repressive government. Along with her Nobel Prize honour, she was listed in the top 10 among Foreign Policy’s top 100 global thinkers of 2011.

Karman, addressing the audience in English and Arabic, said the experience of being among the graduates reminded her of students in the Middle East who “made a great change” during the Arab Spring and who now are now creating a better future for themselves. Only a year ago, her country was still under harsh rule and heavy violence. She noted the Yemeni youth rose up to create a reality for themselves and future generations. “They took their responsibility very well and they believed in themselves,” she said.

She said at the start of the movement, their numbers were small and her friends believed she would be alone in her struggle. She said her belief in God and in the youth allowed her to remain steadfast in her convictions as she rallied more groups to the cause of changing the oppressive government.

She likened the graduates to the students with whom she worked, despite the diversity of their conditions. “These students, like you, don’t have any problems or any bad background. They just want to create a new world, our new humanity,” she said. “This is the new identity of the youth—all of the youth around the world now dream to live in one world that respects our humanity.”

She said this new humanity would be a place where there was respect for all races and religions, and equality of sexes. With the advent of new technology, international laws and agreements become more important and must be improved upon to deal effectively with problems affecting the whole of our global society. She called on those assembled to work collectively to drive forward change in the international community.

“We are getting closer to each other, sharing and communicating together,” she said. “We need international laws that will control and that will observe all these crimes. We are human. The earth is our mother. Humanity is our nation and our identity. We have to take care of this identity and we have to know that any challenge to the safety of the earth and its future is criminal.